The establishment of Hitachi High-Technologies was an effort to put into practice a basic strategy for further strengthening and expanding the unified operation of the business groups of Hitachi, Ltd. and their associated companies in order to bolster the nanotechnology business, including growth fields such as semiconductor manufacturing equipment and biotechnology products.

The nanotechnology sector was marked by rapid technological advances and increasingly tough global competition, so it was essential to put in place a business and operational structure capable of responding rapidly. Hitachi, Ltd. dealt with this challenge by spinning off its Instruments Group and Semiconductor Manufacturing Equipment Group as separate companies, which were then merged with Nissei Sangyo, a trading company within the Hitachi Group specializing in high technology, to form a new company. Subsequently, in order to consolidate the domestic and international sales operations of the clinical testing equipment business of the former Instruments Group, the sales operations of Hitachi Medical Corp. for this category of products were also transferred to the new company.

This business integration and the new company’s establishment were announced in February 2001 and formally ratified at the general shareholders’ meeting of Nissei Sangyo in June. Then, on October 1, Nissei Sangyo’s name was officially changed to Hitachi High-Technologies Corp. 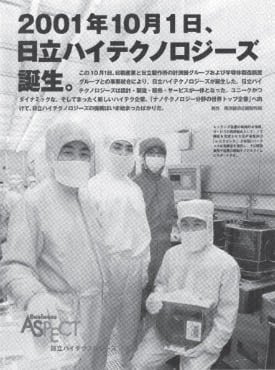