Cultivation of Skills by Taking on Challenges

Electron microscopes, medical systems, CD-SEMs, and other semiconductor-related equipment: the products manufactured by the Naka Div. are all world-class and based on advanced design technology. One major characteristic is that the key parts are almost entirely crafted in-house without reliance on others. Supporting this effort are the skills that are daily nurtured in the Naka Div.

Toru Katouno, a veteran of the Manufacturing Dept. Machinery Section noted for his many years as a milling machine technician, and a recognized “Master Craftsman of the present day,” remarked as follows:

“Product life cycles are short, and something new appears one after another. To always stay at the leading edge, we must hone the skills and technologies suited to such manufacturing. This entails great challenges.”

He says that this involves assimilating basic skills and then challenging oneself to create new skills and technologies, working together with designers, to realize the advanced specs demanded. On the manufacturing site it is important to pass along previously assimilated skills to others while also learning challenging new skills and technologies, and to continue using these skills when manufacturing products so that “the power of skills” is passed down. 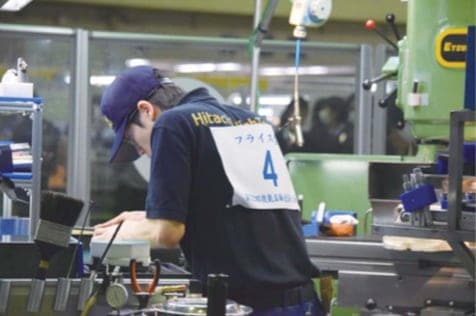 In the Naka Div. senior employees use encouragement of junior colleagues, based on a simple form of on-the-job training, to pass on skills creativity. An integral part of these efforts is skills competitions. Competitors are selected from among newly arrived employees for training in various skill categories and sent to competitions in Japan and abroad. Every year teams from the Naka Div. achieve impressive results.

Katouno, who himself won a gold medal at the 1973 WorldSkills competition, talked about his experience and the irreplaceable value of being selected as a competitor.

“Confronted with ever tougher challenges on a daily basis, I naturally faced them head on. I knew my own limits, and so to get the results I wanted I thought carefully about my stance.”

Akira Fujimoto of the Production Engineering Dept., who won a gold model in the CNC Turning category at the 2007 WorldSkills competition, commented as follows:

“Soon after joining the company I was selected as a competitor. I was able to achieve a clear goal, which led to growth later on. At the skills competitions they have a saying:‘training is like the main event, and the main event is like training.’ I took this as my personal motto and was able to achieve a good result. More than anything else I realized that preparation is all-important.”

“Our role is to work through the skills competitions to support the development of personnel who can act as onsite leaders. This does not stop with the training of potential competitors. Persons who were once competitors become coaches, and it is important that they work together with competitors in a sort of three-legged race. Helping to guide other competitors also serves to further the coaches’ own growth. The competitors and coaches both develop at the same time. This is a special characteristic of the Naka Div. development system.”

He noted that among persons who were once competitors with a sparkling record, many do not do well at guidance when they find themselves in a leadership position.

“When I first became a coach for the WorldSkills competition, the competitor I was supposed to be supporting was not showing any improvement, and I wondered if the problem was with my own guidance. In talking this out with the competitor, I realized that the problem was that I was not really trying to understand him and was teaching stuff in a completely one-sided fashion, and so I started over from the basics,” recalls Fujimoto.

“Any former competitor could fall into this trap. Only when they have bumped against this wall do they realize for the first time how difficult it is to convey skills to others, and thereafter they cultivate a firm guidance method. Anybody can learn how to teach basic skills. However, using coaching to lead a competitor toward a goal is extremely difficult. That is the core,” Katouno said, looking kindly on the growth of the coaches.

Kazutoshi Kanno of the Skills Training Group believes that the key is to properly position human caliber, including communication, and then to supplement it.

“When preparing for the skills competitions both the coaches and competitors must recognize what is important in manufacturing. What needs to be emphasized is human caliber, with communication at the top. The coaches see growth by thinking about how the competitors think, and the competitors use frank discussions with their older colleagues to learn how to live as a person, the philosophy of manufacturing, and the significance of taking on challenges.” 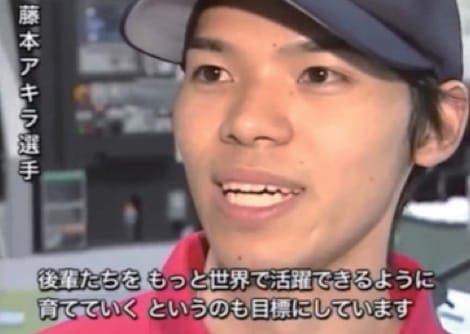 Akira Fujimoto explaining his future goals (at the 2007 WorldSkills competition)

Competitors who have completed a task at the skills competitions return to their respective work sites and start work about two to three years behind other employees who joined the company at the same time.

“Just because you were in the skills competitions doesn’t mean you’re special. There are many leaders of work site technicians who have no experience as competitors. Persons at the manufacturing site are all evaluated equally. In the end, experience at the work site and growth later on as a technician are really the determining factors,” said Katouno with reference to the importance of what happens later.

“Most competitors worry that on-site they may become ‘the kid who can’t keep up,’ but they get over it while following their senior colleagues. This is another critical point for growth, I believe,” said Kanno.

Preparation for the skills competitions is considered to be essential for improving skills at the work site. Competitors and coaches who have a serious determination to win grow through struggling, and after returning they continue to grow alongside the other employees who joined the work site at the same time. One strength of the Naka Div. is the environment of friendly rivalry between employees. It helps to form an unshakeable foundation for developing superior skills.