Reviewing the Business Portfolio to Stay on the Road to Growth

The consolidated financial results for fiscal 2011 refl ect the sudden worsening of the economic climate due to factors such as power shortages resulting from the Great East Japan earthquake and the nuclear reactor incident that followed, fl ooding in Thailand, and the halt in the rise of the yen exchange rate. Sales were down 1.2% yearon- year to \645.9 billion, operating profit was down 8.7% to \25.5 billion, and current net profit was down 19.6% to \14.3 billion.

In April 2012 CS11 and the Medium-Term Management Strategy got underway, and business restructuring proceeded with reorganizations of the Industrial Materials Division, Electronic Materials Division, and Energy & Environmental Solutions Division. In line with the focus on developing new businesses and products, Hitachi High-Technologies purchased SII NanoTechnology Inc., a subsidiary of Seiko Instruments Inc., and in January 2013 Hitachi High-Tech Science Corporation was established.

The consolidated financial results for fiscal 2012 remained disappointing, partly due to the sluggish European economy and slowing growth in emerging economies such as China. Sales were down 13.7% year-on-year to \557.5 billion, operating profit was down 25.6% to \19 billion, and current net profit was down 14.7% to \12.2 billion.

To improve business performance, President Hisada called for efforts to strengthen the company’s business portfolio, an acceleration of the creation of new business opportunities through an overriding emphasis on development, strengthening of the revenue structure, and thoroughgoing cash fl ow management.

In June 2013 Kazuhiro Mori was appointed Outside Board Director and Chairman. Bringing with him an impressive record at Hitachi, Ltd. in sales development in power, transport, and the China and other Asia region, Chairman Mori put his focus on new efforts aimed at “customer-focused work, teamwork, and speeding up work.”

Due to coordinated management reforms and efforts to enhance business capabilities, the consolidated financial results for fiscal 2013 showed the first increase in revenue and profits in three years, with a 14.7% year-on-year increase in sales to \639.1 billion, a 60.6% increase in operating profit to \30.4 billion, and a 48.2% increase in current net profit to \18 billion. Kazuhiro Mori
Outside Board Director and Chairman 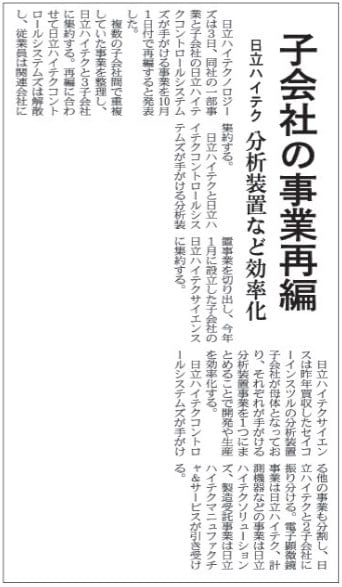