“Lighting a Spark” in Employees’ Hearts

President Obayashi gave a talk at the first SPIRIT Meeting, and company offi-cers also spoke at the second and subsequent meetings. The structure of the event consisted of one day of discussion at the head Office, after which the attendees took what they had learned back to their worksites, where they conducted observation and discussions. This was then followed by two days and one night at the Institute of Management Development, where more discussions were held regarding the strategic aspects of “what we want the company to be” and “shared values the company holds dear,” as well as other topics such as invigorating organizations and personnel.

The aim of bringing together personnel from different departments and work categories was “to trigger a chemical reaction from chaos.” It was also important that the participants would bring issues from the worksite to the SPIRIT Meeting, where they would continue discussions and strive to gain a real understanding of how to convey their thoughts to others, what their colleagues were thinking, and how they were viewed by others. After the meeting there was a get-together, which provided a valuable opportunity to deepen communication.

Participants were invited not only from locations in Japan but also from ASEAN and East Asian countries, and SPIRIT Meetings were even held in America and Europe, with participants attending from Japan. At these meetings the presidents of the local subsidiaries presented talks, and the local staff took topics back to their worksites for discussion.

The results distilled from the SPIRIT Meetings became the Hitachi High-Tech SPIRIT and the four keywords that embody it: Challenge, Openness, Speed, and Teamwork. 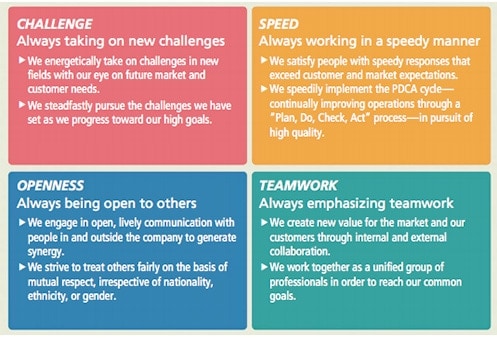 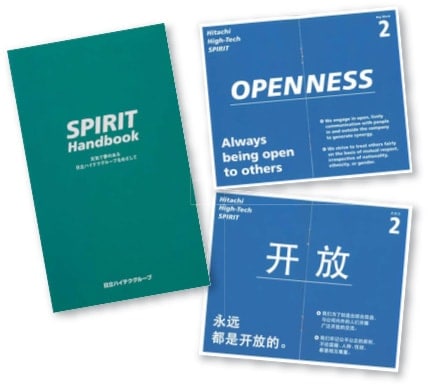 The SPIRIT Handbook, which was published in Japanese, English, and Chinese, and distributed globally