The Hitachi High-Tech WAY was announced in October 2011, marking the start of initiatives to identify and implement a shared corporate vision, strategy, and spirit; to foster a sense of unity within the Hitachi High-Technologies Group; and to boost corporate value. Copies of the WAY book were distributed to all group employees, WAY posters were produced, and efforts were made to encourage understanding and internalization of the message by disseminating it via internal company newsletters, the company intranet, and online WAY announcements from top executives.

Alongside these publicity efforts a SPIRIT e-learning course was developed in Japanese, English, and Chinese (both simplified and traditional characters), and all 9,086 group employees worldwide were required to complete it. In addition, leadership training sessions, workshops for managers, workshops for local subsidiaries, and training sessions for newly hired employees ensured fine-grained, in-depth coverage.

From fiscal 2013 onward a multifaceted approach was taken, with WAY Leaders’ Cafes and WAY Creative Cafes providing opportunities for freeform discussions, as well as WAY Sessions where employees could exchange views with the president.

Furthermore, the Hitachi High-Tech WAY Award was newly instituted in fiscal 2012 to acknowledge practical actions exemplifying the WAY. In 2015 the 3rd annual WAY Awards were presented to winners chosen from among more than 40 nominees.

As a result of these efforts the Hitachi High-Tech WAY has become firmly established. 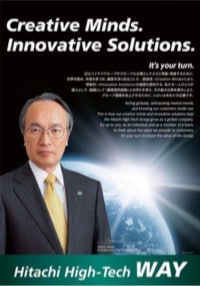