The Fuji Oyama Works of Hitachi High-Tech Science (Sunto-gun, Shizuoka Prefecture) has forested land approximately 44,000 m2 in area that has been named the Woodlands of Hitachi High-Tech Science. We have been conducting activities continuously since 2015 with the aim of working as a member of the local community to realize harmony with nature as well as to restore the forest to what it used to be under the traditional satoyama system of managing natural resources in the local environment as a part of the everyday lives of people living there.

(1) Maintenance and regeneration of a vast woodland

We will continue to maintain and regenerate the woodland that takes up 87% of the total area of our premises.

(2) Converting an artificial forest into a natural forest

Over the course of some 50 years, we will use plants that are native to the region to broadly transform the present artificial forest of Japanese cedar and Japanese cypress into a broad-leaved forest. We collected acorns from kunugi oak and konara oak trees on the property and cultivated seedlings to plant in a mix with a variety of other trees and return the forest to something more closely resembling its original natural state. The other trees include Japanese snowbell, mountain cherry, Japanese flowering dogwood, and Japanese maple, which are tall and medium-height trees, together with Japanese beautyberry, which is a shrub. Our aim is to restore the natural woodland as quickly as possible. This will also improve the ecology for wildlife such as the great tit (a bird) and the Pallas' Sailer (a butterfly). 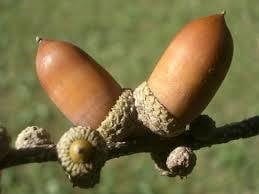 Over the course of approximately five years, we will convert a portion of the lawn into a semi-natural zebra grass field full of native grasses. Every around April since 2016, we have been dividing zebra grass roots for replanting.

We are continuously working to eradicate invasive plant species such as Canadian goldenrod and annual fleabane. 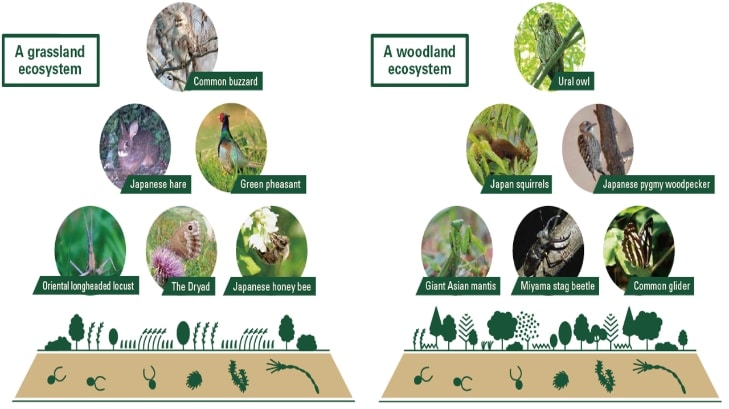 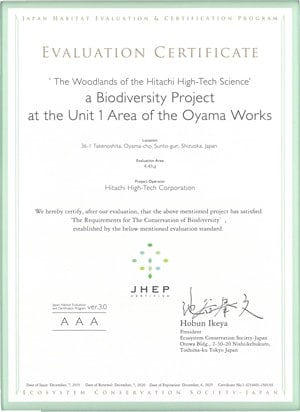 Hitachi High-Tech Corporation received the highest rating of AAA under the JHEP certification system of the national organization "Ecosystem Conservation Society - Japan" for the "Woodlands of Hitachi High-Tech Science"(approx. 44,000 m2).

In 2015, Hitachi High-Tech Science's R&D facility became the first R&D facility in Japan to receive an AA+ rank under the JHEP certification system.
Then, continued efforts to preserve and restore biodiversity were evaluated very highly, leading to the "Woodlands of Hitachi High-Tech Science" project being awarded an AAA rating upon renewal every 5 years of the JHEP certification, the highest ranking possible.

The purpose of the "Woodlands of Hitachi High-Tech Science " is the restoration of a rich natural environment where a diverse range of species coexist. We will continue to strive to maintain and preserve biodiversity with our local communities and our employees.

Congratulations on your JHEP AAA certification.
As with trees, wild grasses are also considered to be an important genetic resource for nature restoration.
I have seen the content of your company initiative, and I was very impressed to see both the conversion from simple planted forests of Japanese cedar and cypress to natural forests that take biodiversity into consideration and the regeneration of grasslands with wild grasses.

JHEP was originally developed in the United States and arranged for Japan. This is a "visualisation" of biodiversity.
In the first place, protecting biodiversity means protecting genetic resources, which are the basis for our survival.

Looking at the current state of biodiversity in Japan, it is actually a serious situation. For example, wild birds are decreasing sharply all over Japan.
Wild birds have decreased significantly since the beginning of the Meiji period and have continued to decrease since then. One of the reasons for the decrease in wild birds is thought to be the decrease in insects as their feeds. The loss of insects is thought to be caused by the loss of nature, the use of pesticides, and light pollution.
Biodiversity in Japan cannot be protected unless such factors are improved.

Among those situation, Hitachi High-Tech is engaged in the business of restoring nature on its own.
And this initiative would be a model in Japan. While SDGs and ESG investing are required worldwide, I am confident that such efforts will be highly valued internationally.