Type of separation mode - Separation depends on the triangle relationships among the sample, filler, and eluent!

Are your friends alike or completely opposite?
Everyone has his/her own taste. In the world of matter, however, substances which are more similar have closer relationships with one another and desire to exist together. Let's observe what occurs within a column.

Separation methods are classified into the four modes: adsorption,partition, ion exchange, and size exclusion. Actually, some of these modes appear to cause separation in combination. Recently, however, attention has been given to another separation mode based on hydrophilic interaction, which is referred to as HILIC. Here, each separation mode will be explained. 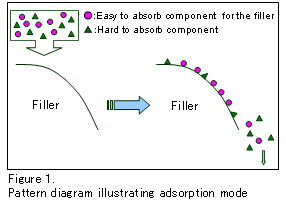 Early in the history of chromatography, silica gel or alumina was employed as a filler to separate substances that can be adsorbed directly on the surface of the fillers. Due to its high selectivity, the silica gel column is still used for the separation of isomers, etc. However, this type of filler has the disadvantages of early deterioration and poor reproducibility. The phenomenon of adsorption is utilized in deodorants etc. because of having the property that retained substances are hard to remove.
Thus, many adsorbed components remain uneluted, which reduces the number of adsorption sites, leading to a gradual acceleration in elution.
This mode causes no difficulties in analyses in which one column is used once or twice for fractionation, such as in column chromatography. However, this mode is not very suitable for analyses in which one column is used a number of times to treat many samples, as in today's HPLC. The partition mode was therefore created as another separation method. 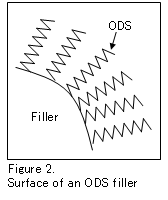 The term "ODS" or "C18" and the term "reverse phase" or "partition" are often heard as the names for a column and separation method, respectively. All of these terms indicate the identical separation mode. As a filler in the partition system, silica gel bound chemically by ODS (Octadesylsilane, which is a compound that contains a chain of 18 carbon atoms, displaying oily properties) is most often used to make up for the disadvantage of the adsorption mode. Compared with the traditional silica gel, this filler is stable when used, as one part of its silica gel surface is bound by ODS, and the other adsorptive part of the surface is also treated. It can be said that the development of this filler caused the progress of chromatography to today's HPLC. The filler can be regarded as a silica gel coated with ODS. A sample is separated between an ODS phase and an elute phase. To understand this situation, image a separated dressing.
The vinegar and salad oil are separately present in the two layers of watery and oily phases, respectively. When this dressing is vigorously shaken, these two substances are mixed. However, if left for a while, the two substances will again become separated, because they are originally "water and oil" that are incompatible with each other.
A sample added to a solution in such a condition is divided into the water-soluble and oil-soluble components according to their properties between the two phases. The components more soluble in the eluent are eluted earlier from the column.

There are many other Chemically-treated fillers, C8 (octyl, -C8H17), Ph(phenyl, -C6H5 ), -CN(cyano), -NH2(amino), and Diol, and each fillers has different separation properties. Although, ODS filler should be selected first generally, and if an ODS filler does not function successfully, another filler can be examined.
"Reverse phase" can be prefixed to the partition mode. This is because the partition mode has the reverse relationships between the filler and eluent, in contrast to the traditional adsorption mode.

Does any ODS column provide the same performance?
Most column manufacturers market ODS columns. However, these ODS columns have various characteristics, and may perform very different separations, even though employing the same eluent. The characteristics of ODS column depend on properties of the silica gel (particle size, pore diameter, etc.), ODS binding method, the amount of binding ODS, and the surface treatment.

Use of the term, "polarity" may make conceptualization difficult. "Highly polar" and "low polar" substances can be considered as watery and oily, respectively. Thus, the difference between the two modes can be shown as follows:

When the same sample is separated by each of these modes, the components are eluted in the reverse order. Therefore, the combination of "highly-polar fillers and low-polar eluent" in the traditional adsorption mode and that of "low-polar fillers and highly-polar eluent" in the partition mode have become referred to as normal and reverse phases, respectively.