Type of separation mode - Separation depends on the triangle relationships among the sample, filler, and eluent! (2) 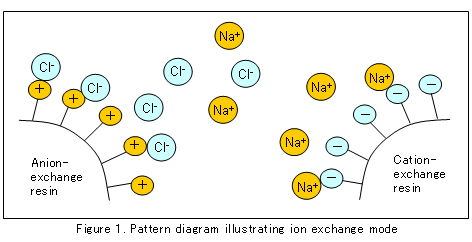 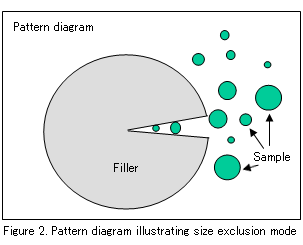 Macromolecular components such as synthetic resins and proteins can be separated according to their size, with sieve-like fillers. The filler is spherical and contains many holes like a mesh. Small molecules can pass through the filler via these holes, but spend much time running through mazes in the fillers. Meanwhile, large molecules unable to enter the holes migrate among the fillers, arriving earlier at the outlet of the column.
Molecules small enough to enter the cavity spend different times passing through the column, according to their sizes.

HILIC is short for Hydrophilic Interaction Chromatography, and is a separation mode based on hydrophilic interaction. ODS mode employs a low-polar filler for separation, based on hydrophobic interaction. HILIC mode employs a silica gel or a highly-polar substance having polar groups as a filler for separation.
If ODS is considered a reverse-phase partition mode, HILIC can be considered a normal-phase partition mode. For ODS mode, water-soluble components are eluted earlier, sometimes leading to insufficient separation. Such separation can be ameliorated in HILIC mode, because water-soluble components are eluted later. To delay elution, a mixture of organic solvent and water is used as eluent at a high ratio of the organic solvent.
For example, sugar analysis with an NH2 column is performed by HILIC mode. This mode is of advantage especially for separation with LC-MS because of its ability to perform separation at a high ratio of organic solvent.