The eluent is an other important factor for the separation. To determine the analytical conditions using an ODS column, for example, experiments are performed as follows.
First, a 100% organic solvent is run, so that the components are early eluted. As this organic solvent, methanol or acetonitrile is often used.
Figure 1 shows a chromatogram obtained when methanol was run as an eluent. 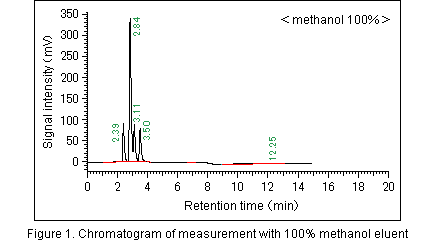 Although the sample consisted of five components, only four peaks were observed, suggesting that two components were not separated. Thus, a methanol/water (= 90/10) mixed eluent was run.
The chromatogram shown in Figure 2 was obtained, with the second peak a little separated. 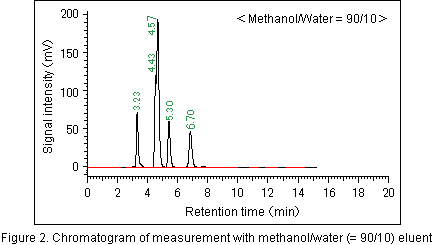 Next, another methanol/water (= 80/20) mixed eluent was run at a higher ratio of water. While the whole time of the analysis increased, the five components were successfully separated, as shown in Figure 3.

In this manner, separation by chromatography is very dependent on the selection of eluent. The eluent should be selected to suit the types of targeted and other components in a sample.