The World Through an Electron Microscope Part 2: Okayama Prefectural Tamashima High School The soil contains such beautiful species! How the experience of discovery and presentations using electron microscopes led to my path of research. Okayama Prefectural Tamashima High School has been designated as a SSH (Super Science High School) by Japan's Ministry of Education, Culture, Sports, Science and Technology for three consecutive 5-year periods since 2007. In the current third period, it is actively working on the theme of "Development of curriculum for scientific investigation activities through co-creation with local communities and the systemization of developmental educational activities."
The school aims to "nurture human resources in science and technology who will play active roles as leaders in the community." Science and mathematics students, as well as students from regular courses are participating in original scientific research activities to foster their skills in creativity, discovery, exploration, and communication.

In this interview, we spoke with Satsuki Ikeda, a graduate of the school's regular course who is now conducting research on mites at Ehime University, and Shigeyuki Oshima, the biology club senior advisor when Ikeda was a student at the school who is currently a teacher at Okayama Prefectural Kurashiki Seiryo High School, about their activities at the time and their encounters with the electron microscope.

I participated in a study on Iriomote Island. I was in awe at the beauty of mites seen through the electron microscope. 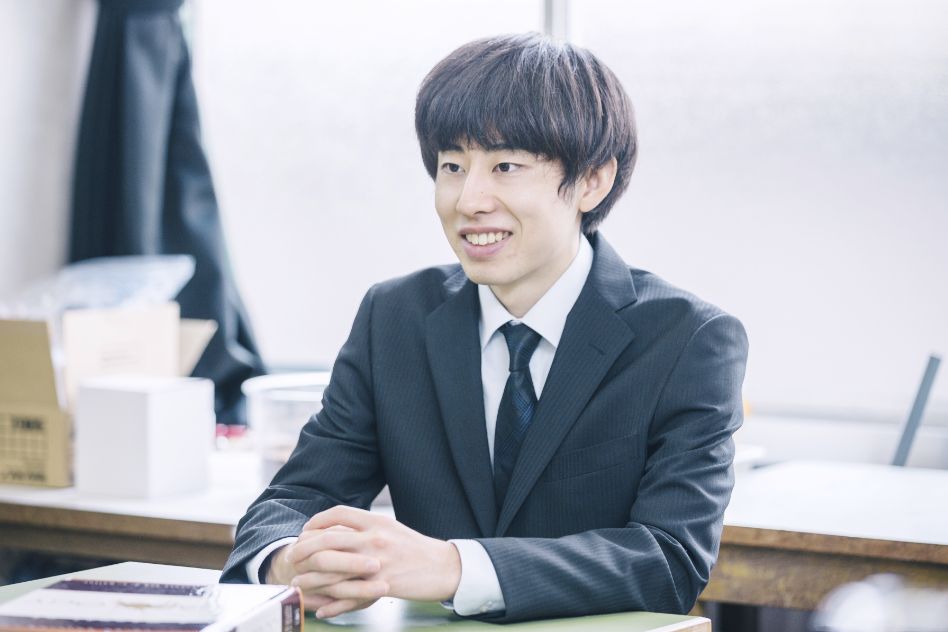 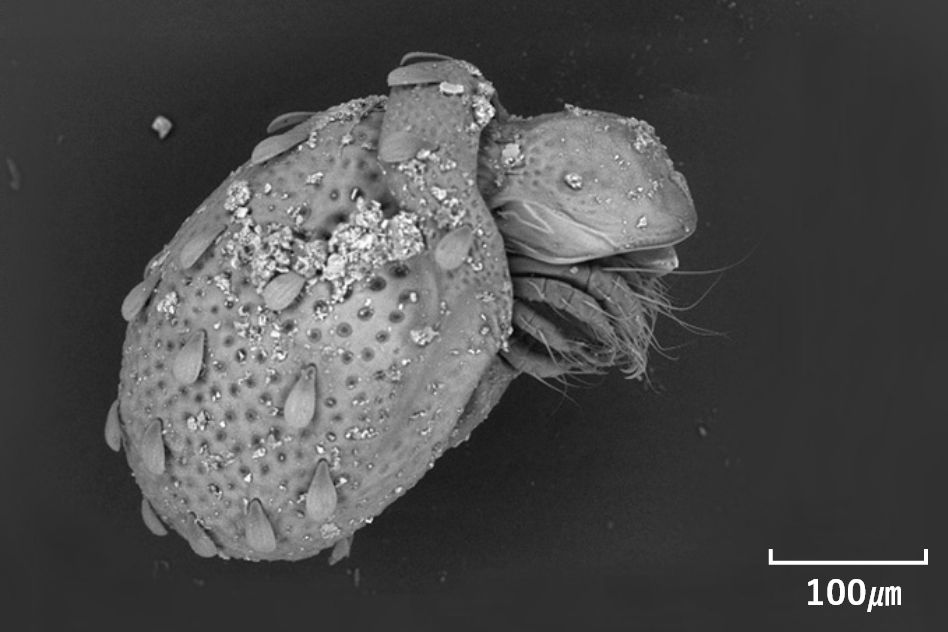 Ikeda: Tamashima High School conducted biological surveys on Iriomote Island every summer as part of its exploration activities. Participating in this program led to my encounter with electron microscopes and to my research of dust mites that I am continuing at university.

Oshima: Tamashima High School has a regular course and a science course. Ikeda was a student in the regular course. Students from either course can go to Iriomote Island if they request to, but before they can go, there is a selection process with reports and interviews. Only students selected through this process are able to participate. Ikeda was one of these students.

Ikeda: Yes. I had always liked biology, but I had forgotten about that in middle school. The main reason I applied for this survey was my desire to go to Iriomote Island. However, as I participated in studies on Iriomote Island, I became more and more interested in the research. Instead of just being awed by seeing the magnificence of nature on Iriomote Island, being able to observe the microscopic life in the soil there truly became the greatest appeal of the research activities.

Oshima: The subject of the research was decided while studying on Iriomote Island. However, as we were unable to examine the samples taken at that time, we decided to take them back to the school to examine them and then put them together in a form to present. Tamashima High School had a tabletop electron microscope that was on loan from Hitachi High-Tech, and we started by using it to identify the mites and determining their species.

Ikeda: The first thing I saw using the electron microscope in the biology room at the school was a type of Oribatid mite called Atropacarus (Hoplophorella) cucullatus. The photos clearly showed the texture and unevenness of the surface of its tiny body, less than a millimeter in length, as well as the petal-like dorsal hairs, and I was able to get a sense of the specimen's solidity. I was amazed that beautiful species such as this are in the soil under my feet, and was quickly drawn into the world of mites.

I learned in giving presentations that it is important to tailor the message for the audience. 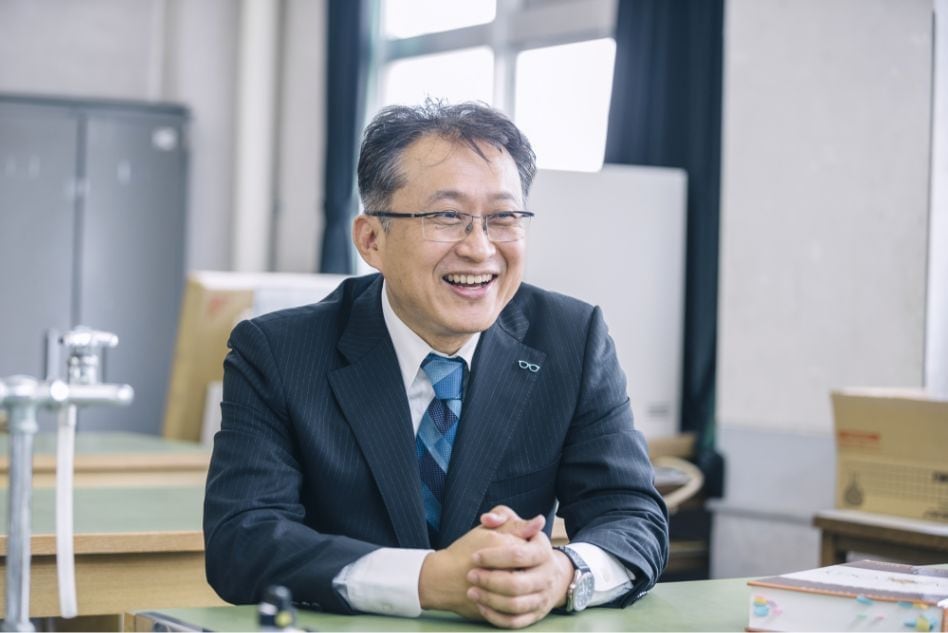 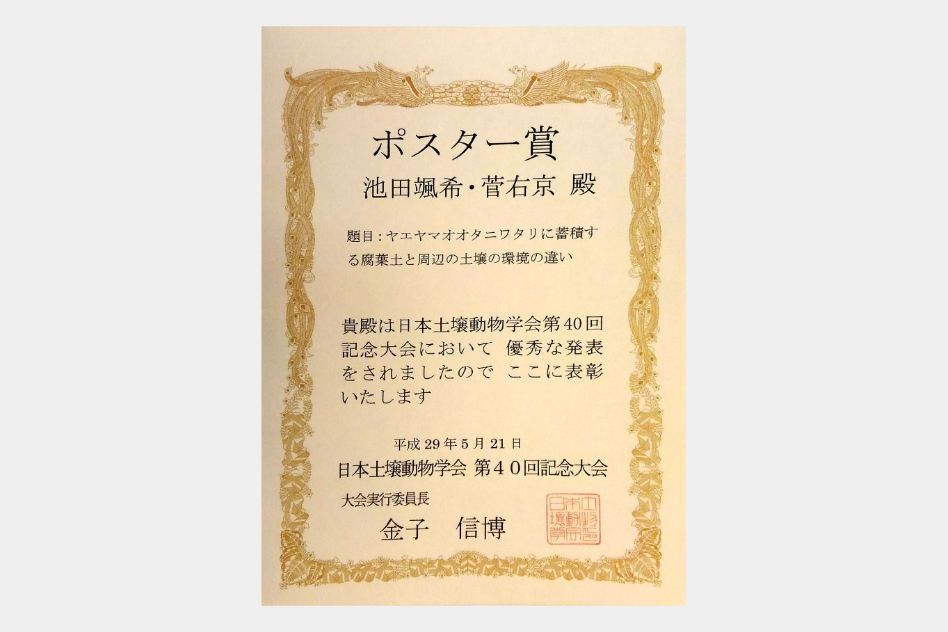 Oshima: Because an important part of the SSH initiative is the process of presenting the research in posters and papers, we compiled the results of our summer studies on posters and presented them to universities and research groups in the fall.

Ikeda: As we were explaining our posters, the impact of the electron microscope pictures seemed to attract people's attention, and many people stopped to take a look. After that, we made improvements by increasing the number of images and adding photos of samples from Iriomote Island. As a result, we were able to win the Poster Award at two competitions: The "High School Students: My Science Research Project Presentation - Science Research! Come All Who Want to Present!" held by the Kobe University Faculty of Human Development and "The 40th Annual Convention of the Soil Science Society of Japan, High School Division."

Oshima: While putting together the poster, Ikeda asked for guidance from professors at the university and from a variety of people, including Dr. Shin Watanabe of the University of the Ryukyus, who had supervised him during his study on Iriomote Island. Another thing that I think helped Ikeda grow was his experience giving presentations at the Life Park Kurashiki Science Center.

Ikeda: I agree. I think it was in the winter of my first year that I was given the opportunity to participate in presentations by Hitachi High-Tech to show photographs taken using their electron microscopes and explain how they work, their functions, and how they are different from optical microscopes. There, I gave a series of presentations of about 20 minutes each, but because the audience was different each time, I had to provide easy-to-understand explanations for each group, which included elementary school students, high school students, and parents with children. By repeating the presentation and receiving advice from the staff members in charge of science education support activities at Hitachi High-Tech, I learned the importance of adapting the content of my talk to match the audience. There were two consecutive days of presentations lasting about 8 hours, so it was quite hard but fun at the same time. The skills I developed here were very valuable for my later research presentations.

Oshima: At first, Ikeda seemed to have trouble speaking and was struggling, but before long, he was adding his own knowledge to the explanation without us having to instruct him, and I could see that he was progressing over just the course of one day. After that, I had him give a presentation on his research activities at a Saturday class at Kurashiki Seiryo High School where I am currently working, and the students were surprised that a fellow high school student could speak so confidently in front of others.

Ikeda: I was in the tennis club in junior high school, but I had trouble dealing with nervousness, so I often found it hard to focus on the game because I would worry about the people around who were watching. In high school, at the beginning, my voice and hands would tremble when I gave a presentation, but after giving presentations in various places and going through a lot of trial and error, I was able to come up with my own answer, that is, nervousness is not something that is eliminated, but rather it is something that you get used to.

More than 200 photos were taken in high school. One of these became the catalyst for a valuable experience. 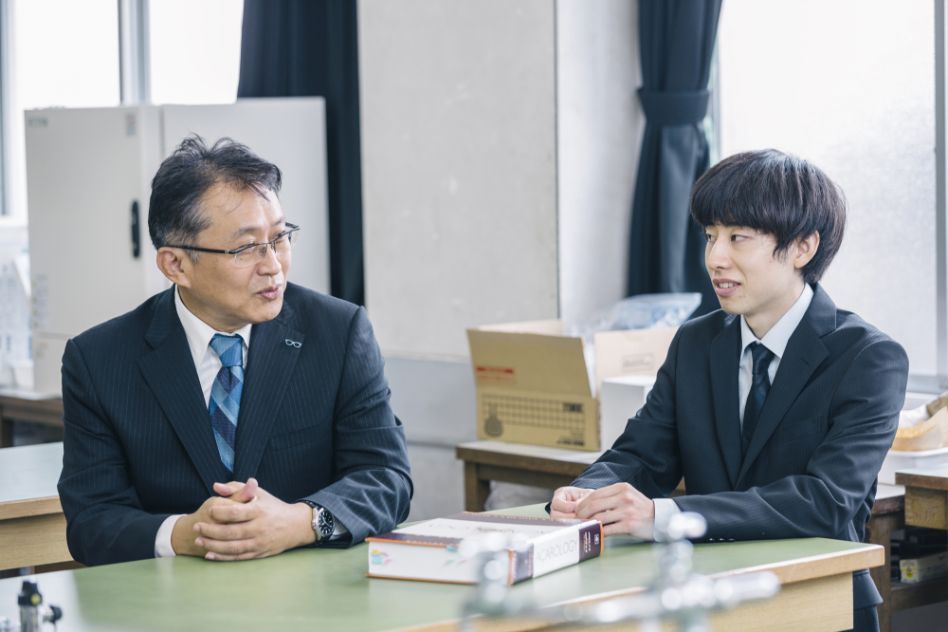 Electron microscope photo of a type of Uropodidae mite

Ikeda: In high school, I was allowed to use the electron microscope freely after school, so I took over 200 photos of mites. My goal was not just to take pictures of various mites, but more to find out what species of mites were present in the soil and in what numbers. As a result of the literary research I had conducted in conjunction with the electron microscope observations, I learned about the various shapes and the diversity of mites, and I became more and more fascinated by them.

Oshima: One of those photos also led to a meeting with Dr. Satoshi Shimano of Hosei University, an authority on mite research. A teacher at another high school, which is also receiving support from Hitachi High-Tech's science education support activities, saw the photo of the Atropacarus (Hoplophorella) cucullatus mite that had been included as a sample on the microscope’s computer, and sent an e-mail to Dr. Shimano, a fellow academic society member. Apparently, Dr. Shimano responded immediately to ask, "Who is the student that took this photo?"

Ikeda: Yes. This led to me meeting him in person at a presentation for the Japanese Society of Soil Zoology, where he gave me guidance, recommended books I should read, and gave me advice for my research. When I enrolled in the school, I didn't even know that the school had an electron microscope, but through participation in the research project and the connections I made thanks to the photos taken, I was able to accumulate valuable experience both in research and communication. I think that all of this has helped me to grow.

He is continuing research on mites at university. His future action target is to become a mite researcher. 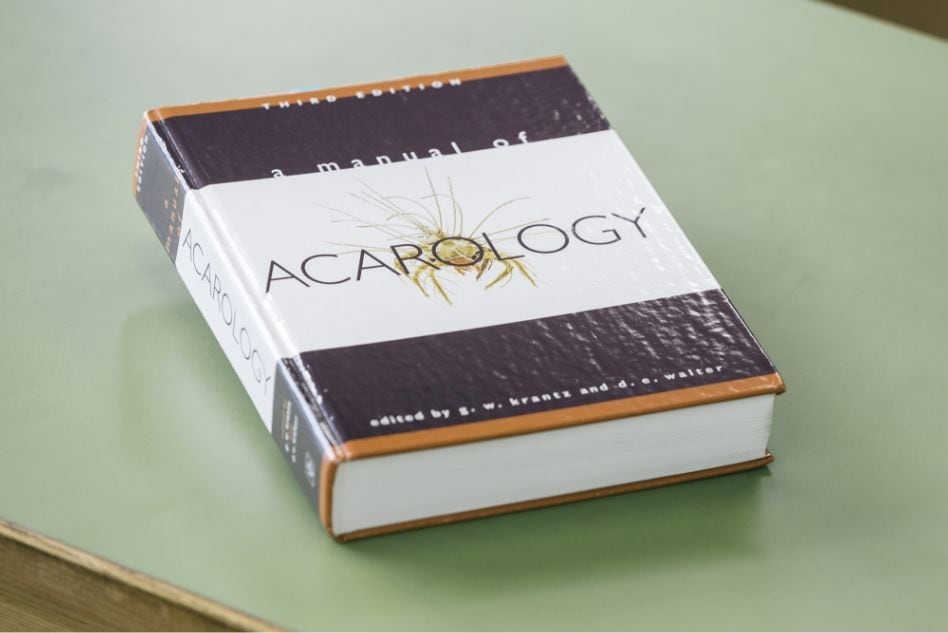 Ikeda: I am currently focusing on evolutionary ecology studies at university. I have been studying mites that eat moss, and have presented my research at the Bryological Society of Japan and the Acarological Society of Japan. When I chose to join the biology club in high school, I never dreamed that I would continue researching mites even after entering university. As a result of continuing my research, I have come to understand many interesting things about mites, so I am extremely grateful for the many experiences I received through using the electron microscope in high school.

Oshima: At the time, I thought that it would have been more impressive if the students had first experienced using a magnifying glass or an optical microscope before learning about the world of Electron Microscopes.

Ikeda: I agree. But for me, the impact of the seeing the Atropacarus (Hoplophorella) cucullatus mite with the electron microscope was more than enough. By examining the mite from various directions, such as from the front and sides, the electron microscope gave me a more concrete idea of the mite's form and what it looks like it. It was this that I found appealing and that made me want to pursue research on mites. I am now working hard toward my future action target of becoming a mite researcher.
In recent years, new things are being actively discovered even about the most familiar organisms. Because of this, I would encourage everyone to recognize the importance of observing familiar organisms. I hope that younger students will also experience the excitement and wonder of using an electron microscope to make new discoveries and understand the mechanisms of the microscopic structures of various organisms.

Gather in the biology room after school!

The Tamashima High School Biology Club currently has eight members under the supervision of senior advisor Kenji Kimura. In addition to observing insects, plants, and other organisms with the electron microscope, they also breed and study freshwater fish and turtles, conduct surveys of seaside biota on the Sami Coast, and volunteer for science activities targeting elementary school students. Enjoy the microscopic world with quizzes and puzzles.