The World Through an Electron Microscope Part 1: Saitama Prefectural Kawagoe High School Learning about structures invisible to the naked eye! How my experience with an electron microscope deepened my interest in biology 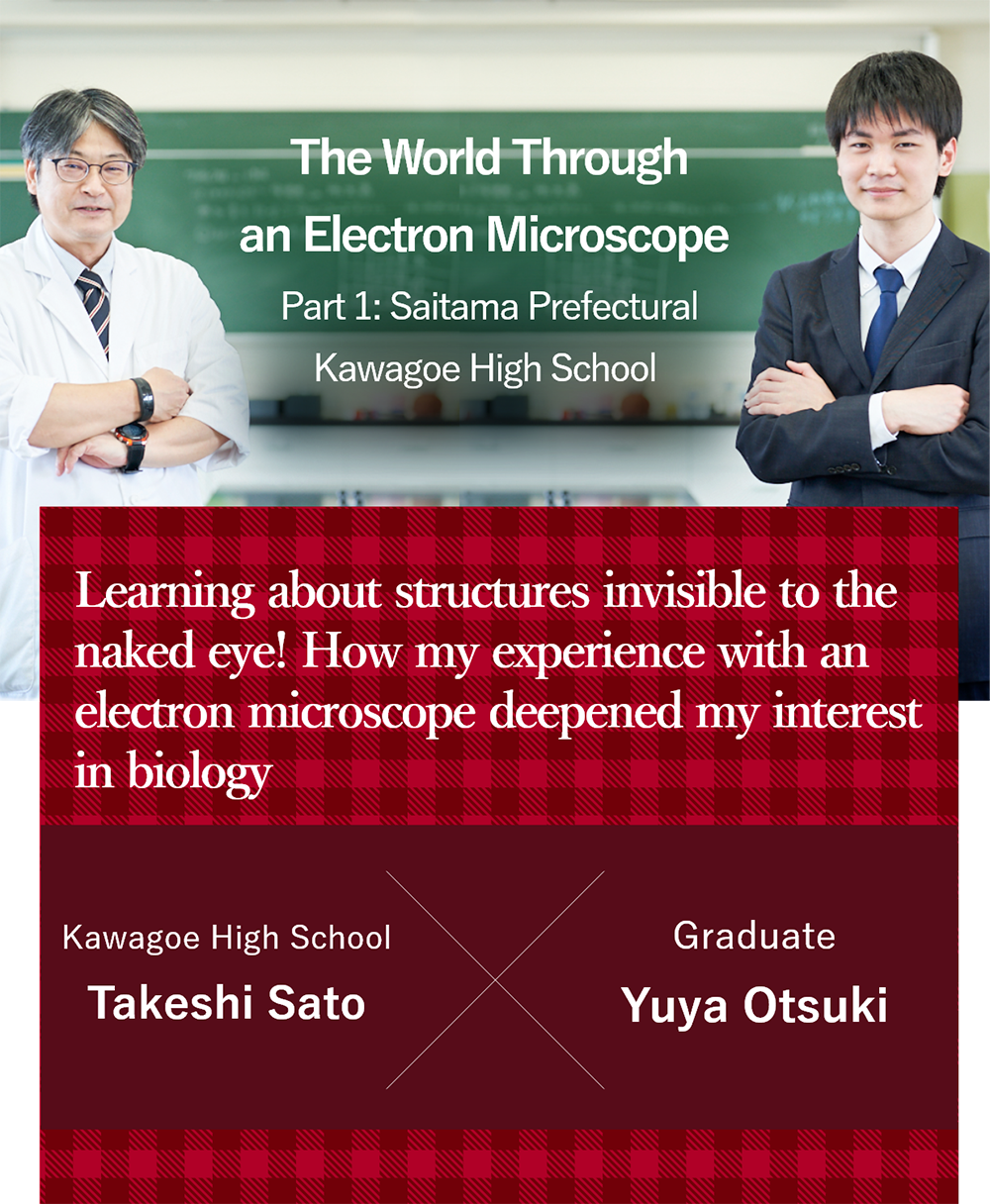 Saitama Prefectural Kawagoe High School is the alma mater of 2015 Nobel Prize in Physics recipient Takaaki Kajita (who works at the University of Tokyo as Distinguished University Professor and Director of its Institute for Cosmic Ray Research). The high school focuses on science education and has the results to show for it: the school has been designated an SSH (Super Science High School) by Japan's Ministry of Education, Culture, Sports, Science and Technology.

The school is currently involved in a Saitama Prefecture initiative known as the World-Leading Science and Technology Human Resources Development Project, and is running its own curriculum called Kawagoe High School Science Exploration.

In 2017, the Kawagoe High biology club used a Tabletop Electron Microscope loaned to the school by Hitachi High-Tech to image a horned tardigrade a mere 0.2 millimeters long, with the students' activities and this rare image subsequently making headlines.

On this occasion, we asked biology club advisor and teacher Takeshi Sato and graduate and former biology club member Yuya Otsuki to share their memories of that time.

"The first thing I looked at was a pill bug. I was impressed by just how much detail I could see." 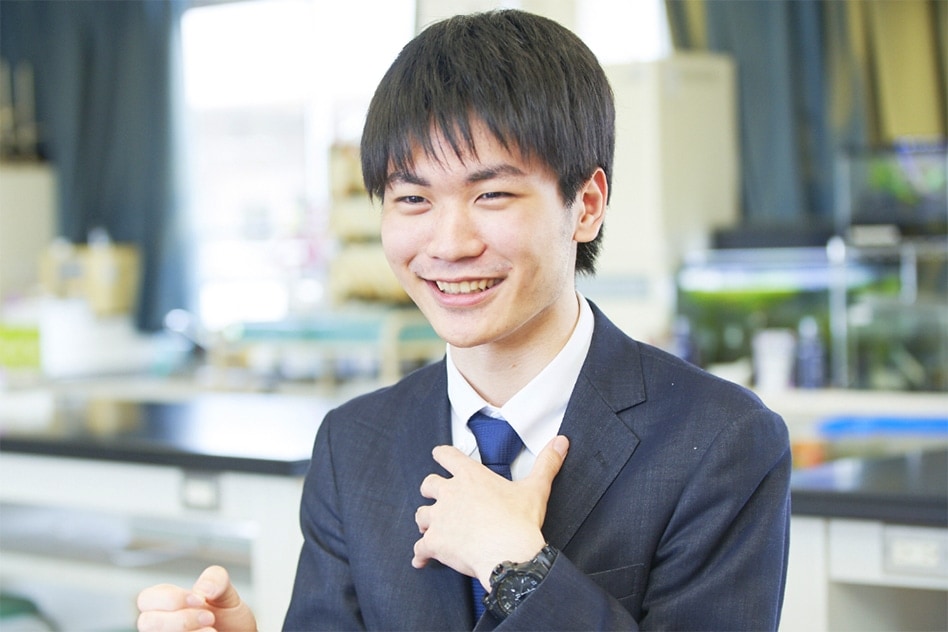 Sato：Since the school was designated as an SSH, we were able to borrow an electron microscope from Hitachi High-Tech. This isn't the kind of equipment high school students usually get to use.

Otsuki：It really is a valuable resource — you can't even use an electron microscope at university without making a reservation, yet I was able to make free use of one in our school biology lab. The first thing I looked at was a tiny pill bug that I caught at school. A pill bug is big enough to see with the naked eye, but I remember being impressed that I could the structures of its mouth and legs in such detail, something you can't normally see.

Sato：It's amazing that you can see so much, and yet it's simple enough for high school students to use.

Otsuki：I really got hooked, and I was using the electron microscope to view any specimen I could get my hands on in the biology lab. I couldn't pass up this chance to see a world I'd never seen before. I found it so fascinating to be able to see these biological structures that normally aren't visible to the naked eye.

Sato：With an electron microscope, you can see the surface structures of things that even an optical microscope can't show you. I think this was just great for the students.

Revealing the microscopic world, from pit vipers to tardigrades. 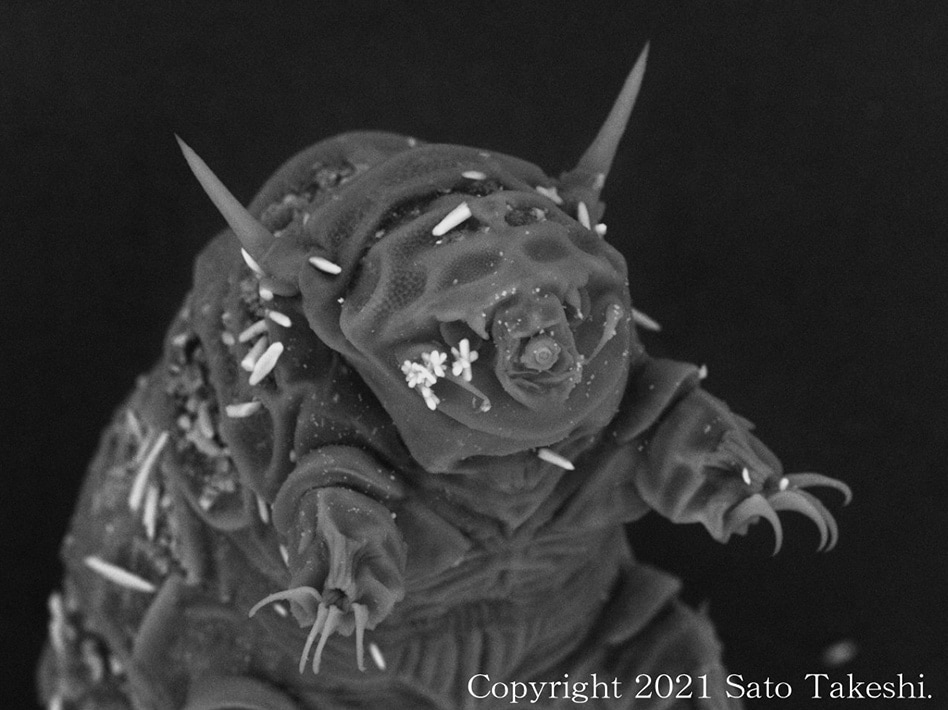 Otsuki：Ever since I was a kid I've been fond of living creatures, and I was always interested in bugs, dinosaurs, reptiles. When I was deciding which high school to go to, I visited the biology club during the Kusonoki Festival open day at Kawagoe High School, and it made me want to study there.

Sato：In Kawagoe High School's biology club, each person is responsible for taking care of different creatures. Yuya wanted to study the pit viper first, didn't you? A specialist teacher warned him not to, because they're dangerous. But when I told him about tardigrades, he was really interested.

Otsuki：When Mr. Sato told me about tardigrades, I thought they sounded interesting. Tardigrades are creatures that live in water. There are also some species of tardigrade that live on land, most of which can tolerate extremely dryness, and which can enter a state of suspended animation called anhydrobiosis in places where there's no water. Spraying water on a tardigrade that's in anhydrobiosis will make it active again. This way of living in which they go back and forth between being alive and not being alive really interested me.
Tardigrades can be caught in places all around us; for example, in dry moss that can be found at school. If you immerse dry moss in water and view the water through a stereoscopic microscope, you sometimes find tardigrades.

Sato：Out of this interest in tardigrades, Yuya contacted Professor Daiki Horikawa, who was conducting research on tardigrades at Keio University, and Professor Horikawa gave him a tardigrade to study. A partnership between the high school and Keio university also meant that he was able to consult and become acquainted with Dr. Atsushi Suzuki, a leading expert in tardigrade research, and tardigrade genome analysis specialist Professor Kazuharu Arakawa, which laid the foundation for the school's tardigrade research. Yuya's enthusiasm to learn more about tardigrades was a major step toward his successful imaging of the horned tardigrade using the electron microscope. 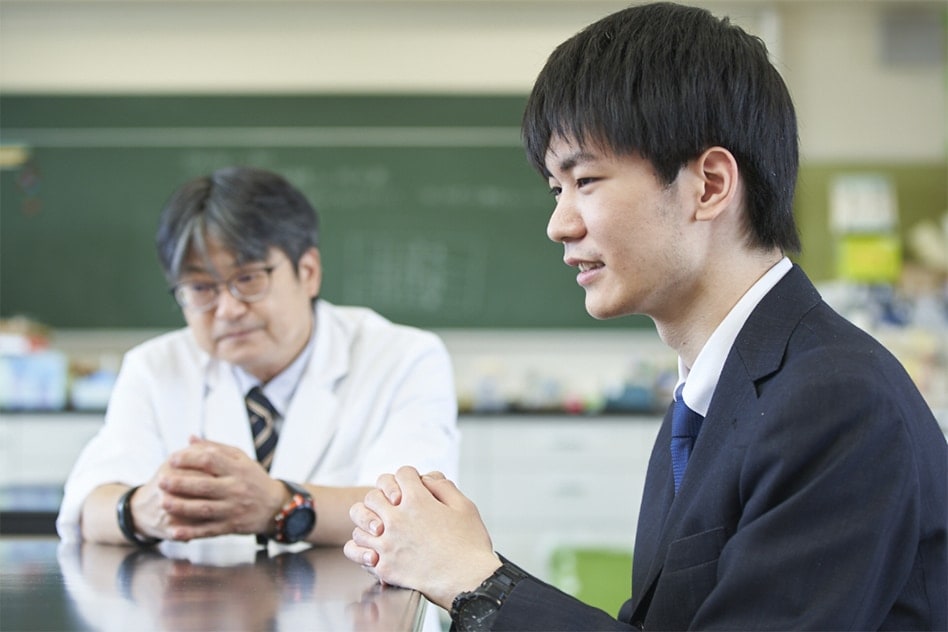 Yuya still has a fondness for tardigrades Otsuki：We went through a lot of trial and error to get tardigrades to stay in their natural form even when in a dry state. And we collected likely-looking moss from various places in the hope of finding tardigrades.

Sato：We discovered the horned tardigrade in moss I collected when I went to Kagoshima for a family vacation. I think it was only about the third time one had ever been found in Japan.

Sato：Because we had failed so many times. But after much trial and error, we finally came up with a method of freeze-drying the specimens. Our electron microscope image of the horned tardigrade was even featured on TV and in the newspapers.

Otsuki：The biology club only had two members when I was at school, but I think now there are actually 30 members.

Sato：There are some members who got interested in the club thanks to Yuya's perseverance with the tardigrade research.

"My high-school experience sparked a passion for biology" 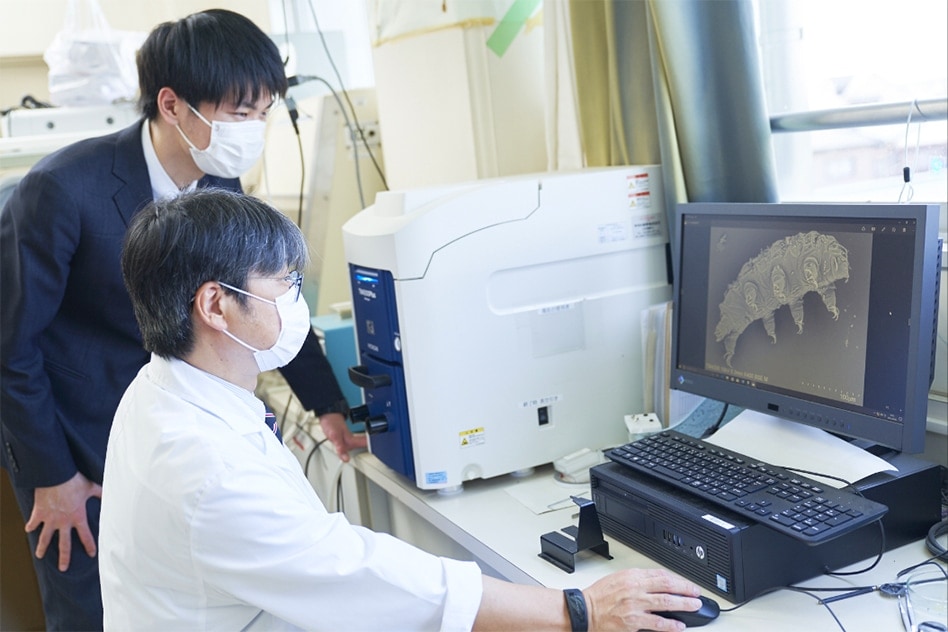 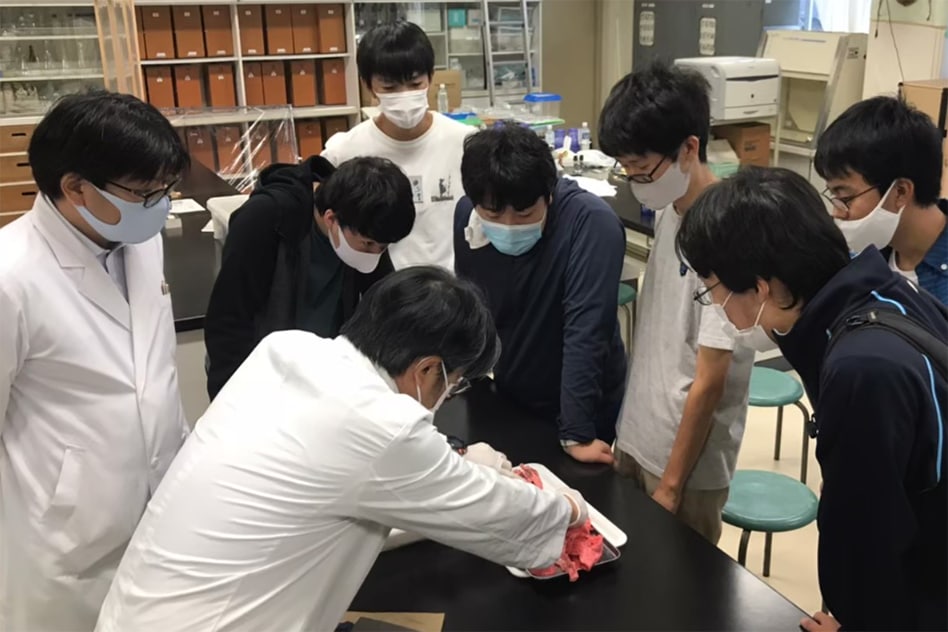 Otsuki：Living creatures like tardigrades constantly going back and forth between being alive and not being alive made me really interested in what it means to be alive in the first place, and I'm now studying biology at university. I plan to go on to graduate school next, but after that I'd like to become a high school teacher.

Sato：He's now a fourth-year university student and he came back for teacher training in June this year.

Otsuki：Thanks to Mr. Sato, during high school I was able to do biology research on the things I wanted to. And out of the many activities we did in biology club, it was the electron microscope that really motivated me to take an interest in all sorts of things and sparked my desire to learn more. My goal is to be a teacher who can create an environment where students can explore and work on their interests, like Mr. Sato did for me.

The Kawagoe High School biology club has about 30 members. Each of them is in charge of looking after and researching different creatures, and they also carry out observations with an electron microscope. At the annual Kusunoki Festival every September, they do a live demonstration where they revive tardigrades from anhydrobiosis, which always proves highly popular with visitors. 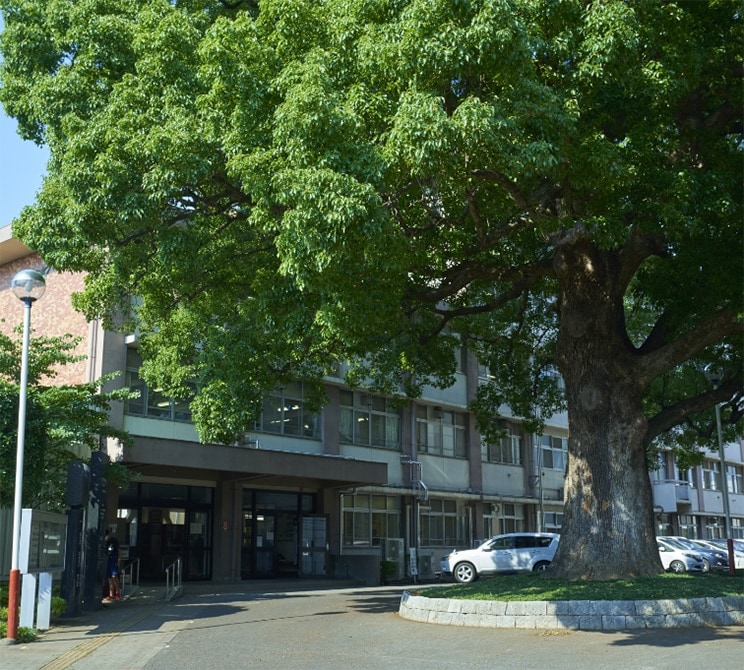