Heritage of Analytical and Scientific Instruments

Japan Analytical Instruments Manufacturers' Association (JAIMA) and Japan Scientific Instruments Association (JSIA) jointly introduced the recognition system for "heritage of analytical and scientific instruments" which have been created in Japan or contributed to Japanese national's living, economy, education and culture to pass them down the generations.
We, Hitachi High-Tech, are delighted to introduce our award-winning instruments. 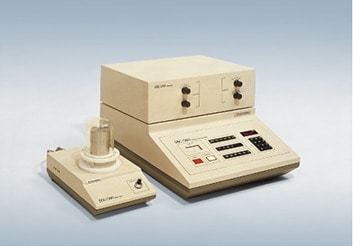 SSC/560 is a heat-flux DSC which was developed in 1978 by Daini Seikosha Co., Ltd.(current Hitachi High-Tech Science).
Micro computer was adopted for the temperature control for the first time in the world where analog control was the mainstream.
Various temperature program and control became possible and this new technology contributed to the development of thermal analysis technique.
There were 2 types of DSC cell, U-Type and S-Type which had the top-level of sensitivity. The former has the temperature range of -150 - 120°C and the max. sensitivity of 0.025 mcal/s/full scale (105 µW/full scale). The latter has the temperature range of -150~500℃ and the max. sensitivity of 0.3 mcal/s/full scale (1.26 mW/full scale). 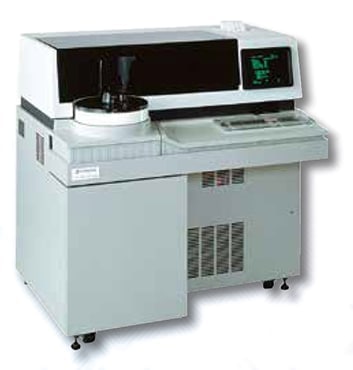 From the late 1970's, the number of clinical examination was increased rapidly and the automation of clinical examination had been demanded.
But on the other hand, with the technology until the 70's, it was difficult to downsize automatic analyzers and thus laboratories with large space were required for the installation.
Also, maintenance inspection was complicated because multiple tubes for reagent for measurement of each test were piped and it was also difficult to operate. Therefore, it had been difficult circumstances for many hospitals except university hospitals and clinical laboratories to introduce automatic analyzers of clinical chemistry.
Model 705 enabled to measure multiple examination despite the simple configuration of just only the two nozzles for reagent pipetting, which resulted in much more compact footprint and significant improvement in maintainability. And also, with a user interface which could specify and register for analytical condition on the monitor screen, it facilitated simple operation.
In addition, a number of innovative technologies were employed, such as Hitachi's own unique method "entire reaction monitoring method" by turntable-random access system for greater flexibility of analytical condition, and thus model 705 had been used by customers all over the world as the de facto standard for automatic analyzers.
As the result, Model 705 was able to support a wide range of analytical examination such as measurement for small amount of protein other than enzyme, lipid and glycemia, which served for expanding activities of automatic analyzer in the principal fields of clinical test operation such as emergency laboratories, drug tests and complete physical examinations. It was introduced in many hospitals around the world, and significantly contributed to improvement for diagnosis support by the prevalence of the 80‘s clinical examination. 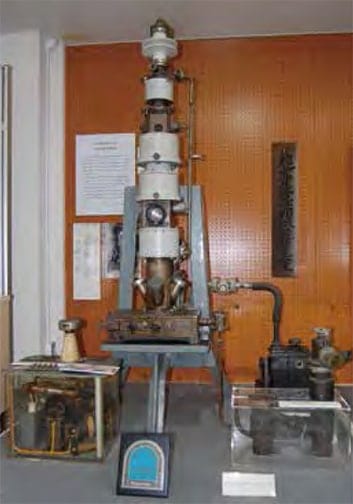 Model HU-2 Electron Microscope (Hitachi, Ltd.) is the first product of transmission electreon microscope in Japan. The specimen (NUM-Ta00037) is one of two products made in 1942, and was delivered to Faculty of Technology, Nagoya Imperial University.
The electron lens of the original production was composed of triple lenses (condenser, objective, and projector lenses), but another projector lens was appended for the experimental studies. Accessories of the electron microscope, such as power supply units to apply a high-voltage, to heat cathode, and to exite lenses, are not preserved.
An oil-sealed rotary, and an oil-diffusion vacuum pumps are used to evacuate the air in a passage of electron beam and a camera of the mirror body, which is necessary for the electron irradiation. These pumps has been recreated and upgraded for the research.
This microscope was operated until 1955, and the technical know-how for the electron microscope has led to the subsequent development of an ultrahigh voltage (300 - 500 kV) electron microscope in Nagoya University. 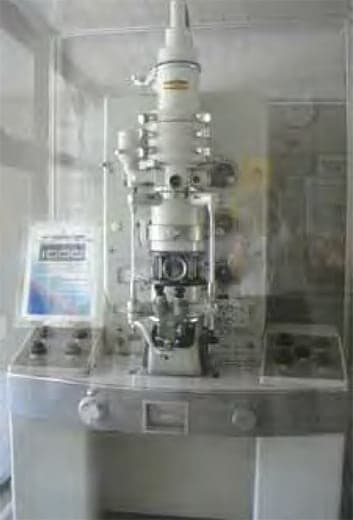 Transmission Electron Microscope (hereinfafter refer to TEM) was installed at the Schientific Mesurament Laboratory of Tohoku University in February 1966. In 1969. lattice resolving power 0.88 Å (0.88nm) was recorded and was placed in the Guinness Book of Records in those days. In 1971, super high-resolution photograph of the super thin graft sample of the asbestos fiber manufactured by using ultramicrotome elucidated the form of concentric circle multiplex; that became spiral, and contributed to microstructural elucidation of the asbestos fiber.
The commercial first unit of the Hitachi TEM "is HU-2" of December, 1942, and same unit of TEM was shipped to the Schientific Mesurament Laboratory of Tohoku University on February 10,1966 that was the accumulation 1000th unit of Hitachi TEM.
In the event of the shipment, a commemorative ceremony was held in Hitachi Naka factory. The HU-11 form is released in 1959 and is a longtime seller machine delivered a minor change to 731 totals repeatedly inside and outside the country for 14 years until 1973. Besides, WDX (Wavelength Dispersive X-ray Spectorometer) for TEM was released as an attachment for the first time in Japan in 1965 and this greatly contributed to development of the technology.

The instrument which heats a sample in a carbon furnace, and measures the concentration of metal at µg/L (ppb) level by the optical absorption of generated atomic vapor.
This is the first model in Japan that adopted the Zeeman background correction system which corrects a background by applying a magnetic field to a sample and splitting an absorption line.
And this is excellent at correction capability compared with the conventional deuterium lamp background correction system.
At that time, it contributed to measurement of heavy metals, such as cadmium/arsenic/lead which caused the environmental pollution problems.
This is the pioneer of the present Zeeman atomic absorption spectrophotometer.

In 1961, the model 139 was developed by technical cooperation between Hitachi Ltd. and Perkin-Elmer (PE), US. It is the low-price single beam ultraviolet visible spectrophotometer. The most features are that diffraction gratings were technically employed as dispersion, and high performance with high stabilities were realized.
It consists of the light source, the spectroscope, the sample chamber, and the light receiving section as block arrangement. By combining with various types of instrument, it is applicable also to analysis of flame/emission/fluorescence, etc. other than absorption analysis.
This product was the first spectrophotometer that was released abroad with the worldwide sales network of PE. It was used in the various fields such as research, quality management and clinical inspection on food, environment and chemical fields, and it was best sold that approximately 8000 instruments were shipped. Afterwards, the design concept of model 139 was taken over to the spectrophotometer model 101 (approximately 20 thousand instruments were shipped), the 100 series, the U-1000/1100 model, and then spectrophotometer model U-5100 that is currently on sale.