The basic modes of SPM are atomic force microscopy (AFM) mode and dynamic force microscopy (DFM) mode. In the AFM mode, the probe is brought into contact with the sample surface through the use of a small force, the deflection of the cantilever will be made constant while controlling the distance between the probe and the sample, and by scanning in a horizontal direction the topographic image is obtained. In both measurement modes, feedback control of the distance between the sample and the probe is necessary, and the interaction effects of horizontal direction between the probe and the sample takes effect. Therefore, the following problems arise:

If you want to measure steep slopes by DFM mode as shown in the figure below, the probe should always maintain the same distance with the sample while scanning. However, it is difficult to always perform feedback control of the distance between the sample and the probe; in downward slopes, the probe tends to move away from the sample, as can be seen from the red line. By optimizing the measurement parameters and increasing the vibration amplitude, the tracking can be improved, although it is not possible to completely eliminate errors.

(2) Samples with adhesive forces tend to drag a probe

When you measure samples that have strong adhesive, or adsorption forces, the vibration of the probe will be obstructed and feedback control is interrupted. Therefore, the topography will show spike-like noise and horizontal lines, and accurate topographic measurement cannot be performed.

(3) Samples that are soft can deform and drag

When measurement is performed on soft samples, drag and deformation of the sample can occur by scanning using the probe as shown in the figure below. This problem appears significantly especially in the AFM mode, since the probe and the sample are always in close contact with each other while scanning.

The SIS mode (sampling intelligent scan mode) is a technology that offers a solution to some of the issues described in the previous section. The probe is made to contact the sample only at the points of measurement, acquiring information about physical properties and topography; the SIS mode is an intelligent measurement mode whose scanning speed can be freely controlled to match the topography of the sample, the probe is retracted into the air on top of the sample except when data is to be acquired.

Figure 1-1 shows a conceptual diagram of the SIS-Topography scanning method. The probe and the sample comes in contact with each other only when data is to be acquired, otherwise while the probe is retracted into the air it goes fast in the horizontal direction; when it is about to come in contact with the sample surface, the scanning speed is slowed down, and evasive action is made where the probe automatically rises from the surface. The SIS-Property operates in the same scanning method, the probe is made to scan without vibrating, the contact between the sample surface and the probe is detected from the amount of deflection of the cantilever. In addition, Figure 1-2 shows a picture from the video of SIS-Topography. 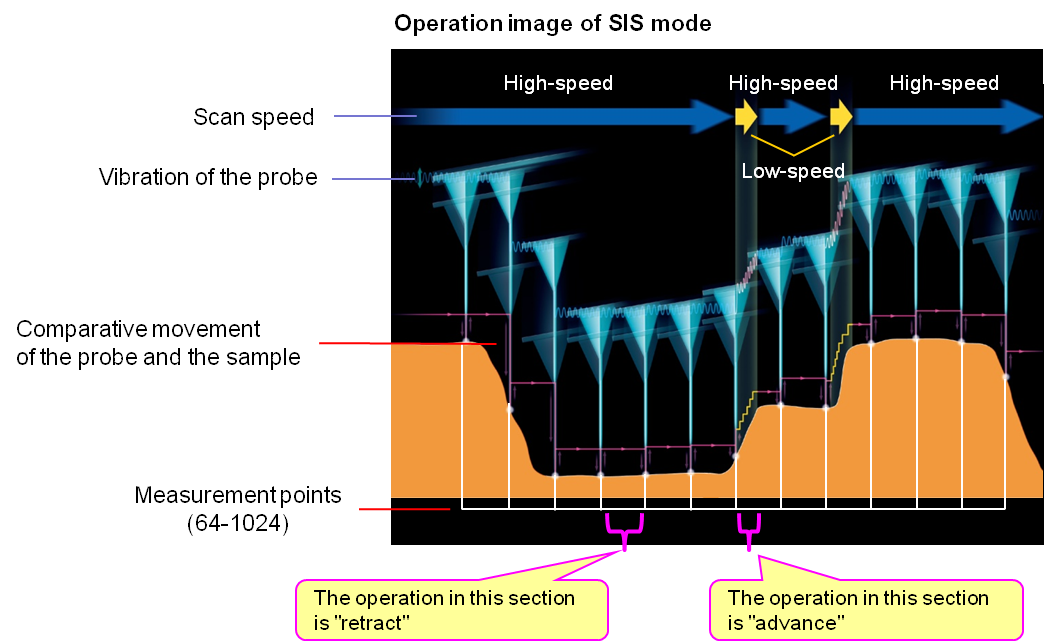 Figure 1-3 shows the operation between data acquisition points in the DFM and SIS-Topography. The red point in the topography is the data acquisition point. The video in the right side of Figure 1-3 shows the behavior between the red point and point in detail. In DFM, the probe touches the surface even in places where the data will not be obtained, so it is just a waste of action. In SIS, the probe touches the surface only a few times, just in points where data will be acquired. This is effective in reducing the probe wear and sample damage.

The DFM touches surface where data is not obtained, waste of action.

In the SIS mode, since the probe comes in contact with the sample only on points where measurement is made, the probe is not affected by the movement in the horizontal direction, as shown in Figure 1-4. Therefore, the measurement is not affected by the drag caused by probe scanning, nor by the deformation of the sample. Also, it is also possible to reduce the vibration amplitude of the lever; one of the advantages is that the number of contacts between the probe and the sample is significantly less than compared to AFM or DFM; it is expected that the following merits below can be achieved:

Figure 1-4 Interaction on the probe