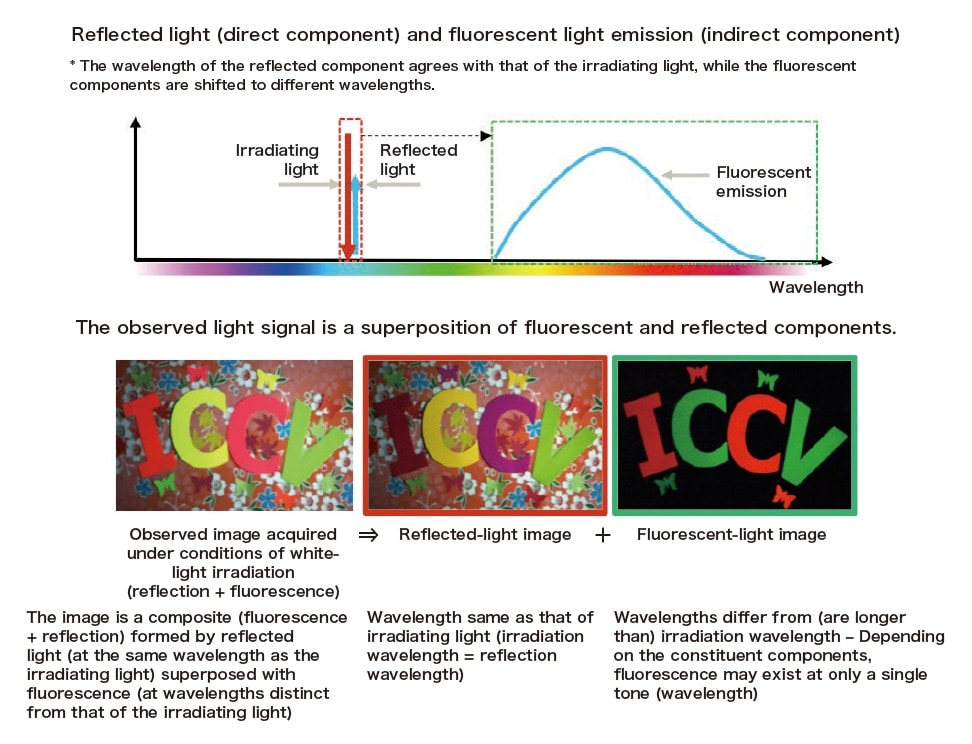 In this equation, I denotes the total light observed from the target sample, while IR and IF denote the reflected and fluorescent components of this light, respectively. Also, L is the spectral intensity of the irradiation, R is the spectral reflectance, and a and F denote the absorbance and fluorescence spectrum of the material, respectively. The reflected light observed from the sample, IR, can be expressed as the product of the spectral intensity of the irradiation, L, and the spectral reflectance R. Meanwhile, the fluorescence observed from the target sample, IF, can be expressed as the product of the absorbance a and the fluorescent emission spectrum F of the material.
Because the camera has three color channels (R,G,B), the value I observed for a given pixel is determined by the values Ir, Ig, Ib observed for each of the three channels. As shown in Fig. 3, the R,G,B channels of the camera have distinct spectral sensitivities Cr, Cg, Cb, and the channel-resolved observation values Ir, Ig, Ib must be corrected to account for these sensitivities. The R,G,B values observed for a given pixel may be expressed as convolution integrals involving the channel-specific spectral sensitivities, i.e., 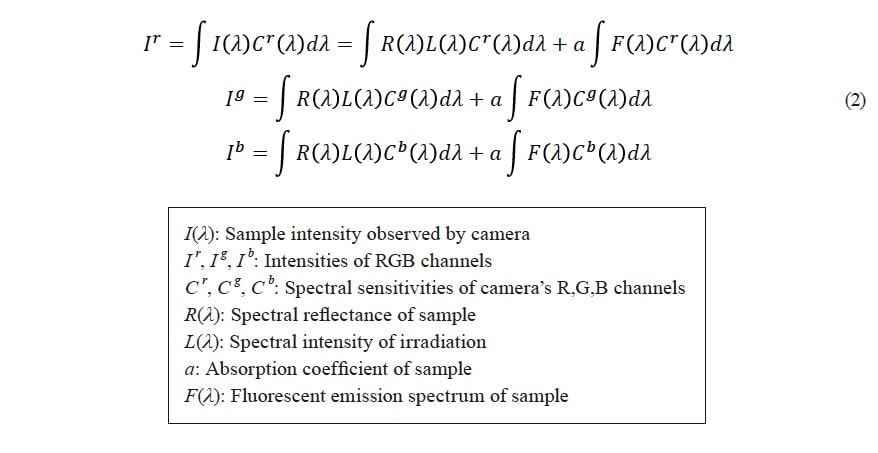 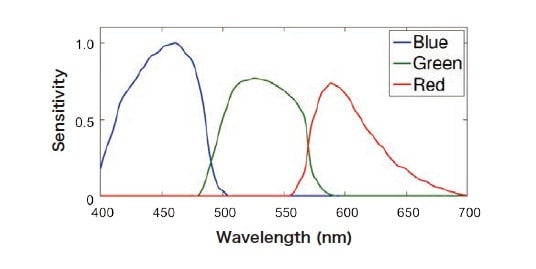 Fig. 4 Schematic diagram of our estimation model and computational method. In this example, the input image was acquired under 400 nm light illumination

By repeating this calculation for all excitation wavelengths and all image pixels, we obtain the spectral properties of reflection and fluorescence and their spatial distributions on the sample surface, respectively (Fig. 5 and 6). 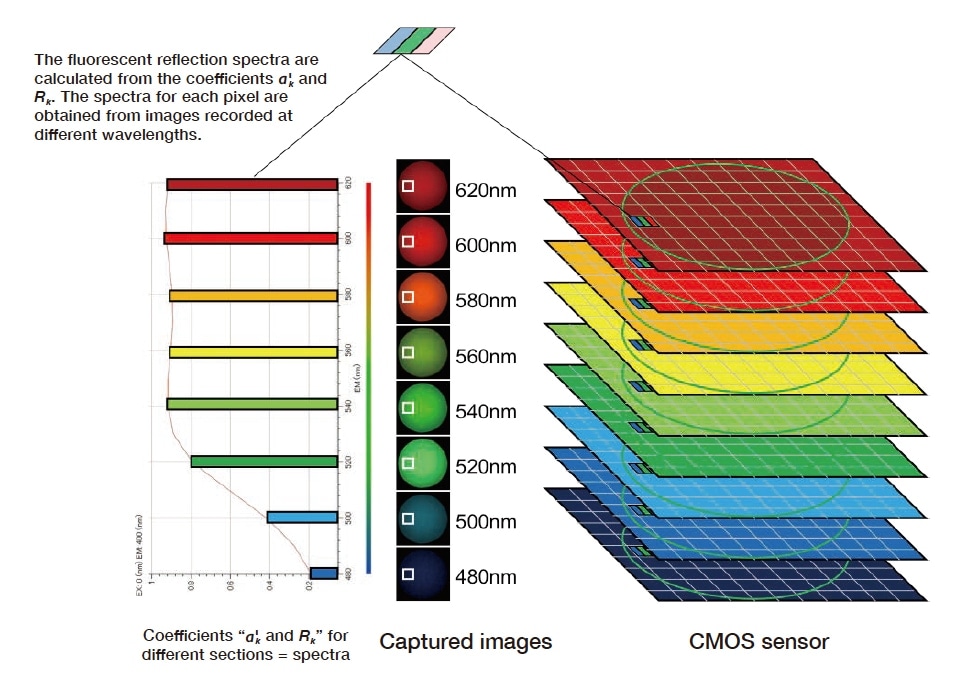 Fig. 6 Spectral conversion of reflected and fluorescent components for the target sample Measurement of an actual sample

As an actual measurement sample we chose a fluorescent reflecting sheet. In addition to exhibiting fluorescence, the sheet is endowed with fine-grained structure to improve visibility.
We irradiate the sample at a series of single wavelengths, spaced at intervals of 25 nm throughout the range 400-700 nm, and capture three-dimensional fluorescence spectra and camera images at each irradiating wavelength (Fig. 9). We observe a spot on the sample with a diameter of 20 mm. The surrounding environment corresponds to the inner walls of an integrating sphere coated with barium sulfate. From the three-dimensional fluorescence spectra we determine that this sample is excited by wavelengths in the range 400-500 nm. Inspecting the captured images, we observe green fluorescence emissions in sample images taken in this range of excitation wavelengths. On the other hand, at excitation wavelengths longer than 500 nm, the sample color tone is similar to that of its surroundings, indicating the primacy of reflected components and the absence of fluorescence. The sample images captured at excitation wavelengths of 460 and 500 nm, at which the sample fluoresces, reveal green fluorescent light emissions from the entirety of the sample surface. Meanwhile, in the sample images captured at 520 and 580 nm—at which the sample does not fluoresce—we see a division into bright regions of strong reflectance and dark regions of weak reflectance. Although the fluorescence has little directional dependence and is emitted from all parts of the sample surface, the reflection is directiondependent and exhibits a distribution reflecting the underlying sample structure.
Next, Fig. 10 shows results of separation using our algorithm. Enlarged images reveal that the period of the fine-grained structure of the reflecting slab is approximately 200 μm. In these images, reflected and fluorescent components appear respectively orange and green, in agreement with the spectral colors corresponding to reflection and fluorescence spectra. We attribute the yellow appearance of this sample to the superposition of orange reflected light and green fluorescent light. Also, in the observed images without component separation, the image pattern begins to change at wavelengths beyond the threshold wavelength of approximately 520 nm, at which fluorescence ceases; similar patterns are obtained in the reflection and fluorescence images produced by our separation process. The fact that monochromatic irradiation at different wavelengths yields different image patterns indicates the presence of contributions from both reflected and fluorescent components; we have successfully demonstrated the effectiveness of inspecting separated reflection and fluorescence images for cases in which the sample exhibits an intra-surface distribution. A fluorescence spectrophotometer is a powerful tool for analyzing the fluorescence properties of samples, such as the wavelength characteristics from excitation and emission spectra. Although conventional methods of spectral analysis are restricted to characterizing the average optical properties of specific sample regions, this newly developed method using CMOS cameras allows the spatial distribution of spectral properties on a sample surface to be determined. Combining these tools with image-separation algorithm enables a wide range of new analytical possibilities, including separation of the reflection and fluorescence images and region-specific spectral compositions.