Boron neutron capture therapy (BNCT) is a radiation therapeutic technique in which cancer cells are selectively targeted by intense beams of particles (α-particles and 7Li particles) arising from the nuclear reaction caused by 10B atoms selectively pre-embedded in cancer cells with relatively low-energy thermal neutrons1). In contrast to other forms of radiation such as X-rays or gamma rays, the α-particles and 7Li particles produced in this process travel extremely short distances—just approximately 5 to 9 μm— in soft tissues; such distances are limited to the diameter of a single cell, and thus the selective uptake of 10B atoms by tumor cells could kill the tumor cells in a pinpoint manner. BNCT is the pioneering radiation therapy used for cancer treatment in Japan in 1968 for the first time in the world. Establishing this useful application of nuclear-reaction in Japan, which is the only country in history to have suffered nuclear bombs attack, would be profound significance. In the past, large experimental nuclear reactors have been used as neutron sources, but compact accelerators (or cyclotrons) for BNCT have recently been developed in Japan that is small enough to be installed in laboratories or hospitals. Since 2012, the nationwide rollout of preclinical trials using them has increased the momentum toward practical application of this technology2). For all of these reasons, BNCT offers promising potential to develop into a near-ideal cancer therapy with few side effects if a boron carrier is developed that can selectively delivers and accumulates 10B atoms in t umors. At present, the only boron carriers to be applied for clinical use are sodium borocaptate (BSH) and L-p-boronophenylalanine (BPA), and neither of these accumulates sufficiently in tumor cells. Thus there is an urgent need to develop new boron carriers capable of accumulating high concentrations of 10B atoms selectively in cancer tissue.
With this as a motivation, we have initiated a research program to develop tumor-selective boron carriers based on peptide chemistry3, 4). In recent work, we have developed boron carriers based on the chemical delivery system using membrane-permeable lipopeptides (Figure 1)5). In the molecular design of the boron carriers, an anionic boron cluster BSH was loaded on membrane-permeable lipopeptide vehicles via a suitable linker (Figure 2). Because ionic boron clusters are not membrane-permeable, we attempted to accumulate BSH sufficiently in cells by a structural optimization of the lipopeptide moiety.
For the structural modifications of the lipopeptide units, we designed a wide variety of vehicle molecules by combining peptides with various amino-acid sequences and multiple kinds of lipids. Since the lipopeptides synthesized by solid phase method had a relatively large molecular weight of 1,000 or more and were also highly hydrophilic, it was difficult to follow the reaction by TLC as in the case of general organic synthesis. Instead, a reaction-tracking protocol based on LC-DAD-MSD was utilized to effectively promote diversity-oriented synthesis of middle-size molecules. Here, we will present some practical illustrations of this approach. Fig. 1 The back cover of a recent issue of ChemMedChem, featuring cover art designed by Assistant Professor Mieko Tsuji. 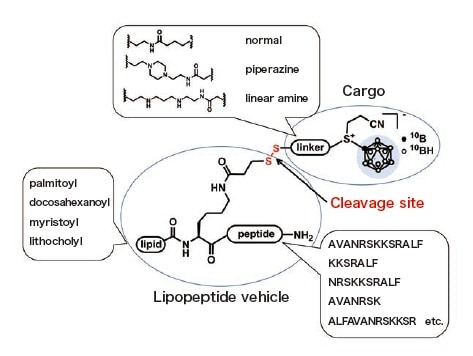 For the lipopeptide vehicle unit, we used the GPCR modulator P1pal-136) known as pepducin as a lead structure to design and synthesize boron carriers with structural diversity by combining various peptide sequences and lipid structures as shown in Figure 2. Lipopeptides were prepared via microwave assisted solid-phase peptide synthesis (SPPS) using the Fmoc method. We synthesized peptides using Fmoc-L-Ala-OH, Fmoc-L-Val-OH, Fmoc-L-Leu-OH, Fmoc-L-Asn(Trt)-OH, Fmoc-L-Arg(Pbf)-OH, Fmoc-L-Ser(t-Bu)-OH, and Fmoc-L-Lys(Boc)-OH on NovaSyn® TGR resin (0.24 mmol/g) at 0.05-0.5 mmol scales. BSH acetamide was conjugated to a linker moiety having a pyridyl disulfide group to produce a cargo and linker unit for connecting to a lipopeptide via a disulfide bond. An alkylene linker, a piperazine linker, and a linear polyamine linker were synthesized as linker moieties. By condensing these three parts, various boron carrier candidates were obtained. During the above reactions, the progress of the reactions was monitored by LC-MS or direct infusion mass spectrometry of the crude material partially cleaved from the solid phase resin and of the crude extract of the reaction mixture of the coupling reactions.

Sample preparation:
During the SPPS, each time three residues were condensed, the reaction product was partially cleaved from the solid phase resin to determine the reaction progress as follows. First, m-cresol/H2O/TFA (10:10:80(v/v)) was added to 20 mg of the resin and stirred for 3 hours at room temperature. After filtration, the peptide was precipitated by the addition of Et2O to the filtrate and dried after removing the solvent. The obtained crude peptide was dissolved in approximately 1 mL of MeCN/H2O (1:1) solution, filtered, and subjected to LC-MS analysis or direct infusion MS analysis. To monitor the disulfide exchange reaction from compound 1 to 2 overtime, a portion of the reaction solution was sampled and diluted with a MeCN/H2O (2:1) solution, filtered, and analyzed by LC-MS. T98G glioblastoma cells were treated with 10 or 20 μM boron carriers for 12 hours, then washed with PBS and collected. The collected cells were dissolved in nitric acid, diluted with water, and analyzed for boron concentration by inductively coupled plasma atomic emission spectroscopy (ICP-AES).

T98G cells were treated with 20 μM BSH, boron carriers 2 or 3 for 24 hours, washed with PBS, collected into a Teflon tube for irradiation. Cells were irradiated using the neutron beam at the Heavy Water Facility of the Kyoto University Research Reactor (KUR) operated at 1 MW power output. Conventional colony-formation assays were performed to determine the survival rates and the value of D10, the physical radiation dose needed to obtain a survival rate of 10%, were calculated.

Figure 4A shows analytical data of a crude product of an intermediate (five residue condensation) (upper) and a crude reaction product of compound 1 (lower) of the SPPS. In the upper chart, the peak of the expected molecular weight of 592 for the target compound was observed as the main peak, indicating that the condensation reaction proceeded in good yield. Therefore, SPPS was able to produce the target product in high yield by optimizing the reaction conditions while performing LC-MS or direct infusion MS analysis of the crude peptide product every time several residues were coupled. The lower chart is a mass spectrum of the crude extract of the reaction to obtain compound 1 and mainly has a peak at m/z = 634.4 corresponding to the triply-charged ion of target compound 1 (MW 1900.2). Figure 4B shows analytical data on the tracking of the disulfide exchange reaction from compound 1 to 2 over time by LC-MS. In the LC chart of the crude extract obtained from a portion of the reaction solution after 15 min, the two broad peaks were overlapped. From mass spectrometry, the two ion peaks corresponding to m/z 951.7 and 634.7 as 2+ and 3+ ions respectively of the starting material 1 were detected at the peak a, suggesting that the reaction proceeded slightly. Then, one broad peak b was observed in the LC chart after 8 hours of reaction. The progress of the reaction was confirmed by the presence of triply charged ion peak (m/z 783.9) and quadruply charged ion peak (587.4) of target product 2 in the mass spectrum of the peak b.

Analysis of the correlation between the peptide sequence and intracellular boron uptake revealed that compound 3 with an original sequence of 13-amino acid peptide derived from P1pal-13 and a palmitoyl group permeated into the cells in the largest amount. The boron carriers with peptide of the C-terminal 7 or 10 residues excluding the N-terminal from the original sequence hardly entered the cells. On the other hand, boron carrier with a peptide of the N-terminal 7 and 10 residues penetrated into the cells moderately. These results suggested that the N-terminal sequence of P1pal-13 is important for cellular penetration. The derivative with the peptide in which three hydrophobic residues at the C-terminal were moved to the N-terminal showed moderate intracellular uptake. Compounds with randomly arranged peptide sequences or peptides with an reverse sequence were hardly incorporated into cells. Next, intracellular uptake of boron carriers having the original 13 amino acid peptide with modified lipid structure were also examined. Boron carrier with acetyl group instead of palmitoyl group or with lithocholic acid did not enter the cells. Compounds with docosahexaenoic acid, a linear unsaturated fatty acid, and myristoyl group, a linear saturated fatty acid, showed moderate uptake. As a result, it was found that palmitoyl group is necessary for intracellular penetration. For further improving cellular uptake of boron carrier, we evaluated the introduction of a polyamine linker and a piperazine linker which are expected to be cationic under physiological conditions, but no significant increase in the cellular uptake was observed.
From the above results, we examined the radiosensitizing effect of compounds 2 and 3, which showed good penetration into cells, with thermal neutron beams in T98G glioblastoma. As shown in the table of Figure 5, since the D10 value and the colony formation rate in the BSH treatment were almost equal to those of the control, under the experimental conditions of this study, BSH was found to hardly enter cells and had no radiosensitizing effect. On the other hand, the enhancement effect (D10 of control / D10 with boron carrier) of the newly developed compounds 2 and 3 were 5.79 and 7.69, respectively, indicating that they have strong sensitizing effect.

Fig. 5 Structures and plating efficiencies without irradiation, D10 values and the enhancing effects of BSH, boron carriers 2 and 3.

In this work, we developed lipopeptide-boron cluster conjugates 2 and 3 for use as boron carriers for BNCT. These compounds were found to significantly improve the cell membrane permeability and radiosensitizing effect on T98G cells under mixed-neutron beam irradiation, compared to the anionic boron cluster BSH currently in clinical trials. The methodology for the development of the lipopeptide-conjugated membrane-permeable molecules reported here may also be applied to other membrane-impermeable species, and offers great promise as a useful strategy for intracellular delivery of drugs.

The results presented here were obtained primarily by Aoi Isono in the course of a doctoral degree program. Neutron-irradiation experiments were carried out under the guidance of Professor Shin-ichiro Masunaga and Assistant Professor Yu Sanada of the Kyoto University Institute for Integrated Radiation and Nuclear Science. We also received guidance from Professor Osamu Sakurada of the Gifu University Graduate School of Engineering regarding ICP-AES measurements for determination of boron concentrations. We take this opportunity to extend our gratitude to all.

1. “Chromaster®” is a registered trademark of Hitachi High-Tech Science Corporation in Japan.