Solid oxide fuel cells (SOFCs) and solid oxide electrolysis cells (SOECs) are electrochemical energy conversion devices that have demonstrated high energy conversion efficiency by high-temperature operation. Perovskite materials have been extensively investigated as electrode materials both for cathodes and anodes. In situ exsolving metal nanoparticles on the active metal doped perovskite through reduction atmosphere treatment to establish highly active metal-oxide interface is an effective way to enhance catalytic activity of the perovskites1, 2）. The exsolved metal nanoparticles possess excellent operation stability by their socketed structure on the perovskite. Moreover, these exsolved metal nanoparticles can be “intelligent” catalyst, which means the metal-oxide interface can regenerate itself upon redox (reduction/oxidation) treatments. After operating for a long time, the metal nanoparticles may tend to coarsening, agglomeration or poisoning by the gaseous impurity such as sulfur or coking. Oxidant (air) will flush the sulfur or carbon species absorbed on the electrode, and the agglomerated metal nanoparticles could also be dissolved into the perovskite, the electrode can be regenerated again through a reductant (H2) treatment to obtain elaborate metal nanoparticles again. Which can significantly alleviate the agglomeration of the metal nanoparticles and enhance the lifetime of the highly active metal-oxide interface catalyst3, 4）. A redox stable electrode is a better choice both for SOFCs anodes and SOECs cathodes.
In the past decade, in situ exsolution strategy has been extensively exploited for perovskite-type (ABO3) oxides due to their high structural stability in a redox treatment and allowing for almost all transition and rare earth metals in A or B sites. The successful construction of active perovskite supported metal or alloy nanoparticles ranges from noble metals (such as Pt, Pd, Rh, Ru, Ir and Ag) to transition metals (such as Fe, Co, Ni and Cu)2）. Understanding and controlling the formation of nanoparticles on the surface of functional perovskite oxide supports is critical for tuning activity and stability for catalytic for energy conversion applications. In situ transmission electron microscopy (TEM) has been employed to provide insights at nanoscale into the exsolution of metallic nanoparticles in perovskites under reducing atmosphere5-7）. Luo et al. used in situ TEM to investigate the exsolution of Co nanoparticles in Pr0.5Ba0.5Mn0.9Co0.1O3 perovskite, provided a real time observation (dark field (DF) images) of the emergent process via an environmental transmission electron microscopy (ETEM)5）. Kim et al. measured the growth kinetics of individual Co particles exsolved on SrTi0.75Co0.25O3-δ polycrystalline thin films perovskite using in situ TEM6）. They found that the exsolution of Co nanoparticles preferentially occurs at grain boundaries and corners which that are energetically favorable locations to minimize their nucleation energy barriers. Tsampas et al. used a latest generation in situ ETEM to follow the exsolution of individual nanoparticles at the surface of La0.43Ca0.37Ni0.06Ti0.94O3 perovskite, with ultrahigh spatial and temporal resolution7）. Whereas, except for the crystal reconstruction from the bulk phase information, three dimensional surface morphology evolution for the perovskite surface and topographical information reﬂecting the exsolved metal nanoparticles are very important to provide a deep understanding of the formation of the nanoparticles and demonstrate the tailoring of the nano-interfaces. Furthermore, the dissolution process and structural evolution under oxidizing atmosphere also deserve more detailed research to get fundamental understanding of the redox reversibility in order to design highly efficient and regenerative metal-oxide interfaces. Therefore, an instrument with highly spatial resolution and high sensitivity TEM instrument equipped with highly sensitive secondary electron (SE) detector have extensive requirements and unlimited space. Hitachi HF5000 as an in situ scanning transmission electron microscopy (STEM) is therefore brought to our attention.
In consideration of economic feasibility, we focus on the study about redox reversible exsolution/dissolution of CoFe alloy nanoparticles in Sr2Fe1.35Co0.2Mo0.45O6-δ (SFMC) and La0.4Sr0.6Co0.2Fe0.7Mo0.1O3-δ (LSCFM) perovskites, which are commonly used in SOFCs and SOECs as the redox stable and highly active electrode materials8-11）. Metal oxide perovskites have the advantages of structural stability, even under high temperature (1300 °C) and a wide range of oxygen partial pressure. Taking advantage of the in situ atmosphere and high operation temperature, the surface and structural information from the SE, BF and DF-STEM images from Hitachi HF5000, we can obtain a direct geometrical structure and acquire a deep understanding of the behaviors under redox manipulations.

Overview and Specifications about Hitachi HF5000

Hitachi HF5000 field emission scanning transmission microscope (STEM) is an instrument equipped with cold field emission electron gun with an accelerating voltage of 200 kV (Figure 1). Meanwhile, the instrument is equipped with three STEM detectors: a bright field STEM (BF-STEM) detector and an annular dark field STEM (DF-STEM or HAADF-STEM) detector, and a secondary electron (SE) detector installed on the upper side above the objective lens. All three signals can be recorded and saved simultaneously, both as static images or as movies, atomic resolution images and movies can be obtained from room temperature to high temperature and in situ atmosphere conditions (20-1200 °C for the MEMS chip). An advantage of this measurement is that multiple types of information can be obtained at the same time: the DF-STEM image indicates atomic number dependent Z-contrast, the BF-STEM image indicates phase contrast, and the SE-STEM image reﬂects the three dimensional surface structure of the sample. An advantage of this measurement is the acquisition of atomic resolution DF, BF and SE images simultaneously12）. As a highly spatial resolution and high sensitivity TEM/STEM instrument, HF5000 equipped with high atomic resolution energy dispersive X-ray spectroscopy (EDS) and electron energy loss spectrum (EELS), which makes it a powerful tool for a wide range of users.
In situ conditions: the experiment was performed using MEMS heating holder, and the gas flow was controlled by MFC systems (flow: 2 mL min-1 and pressure: ~10 Pa of pure H2 or O2). Our sample was supported on the 50 nm thick Si3N4 membrane, the gas was injected to the sample area directly by a special gas injection nozzle. 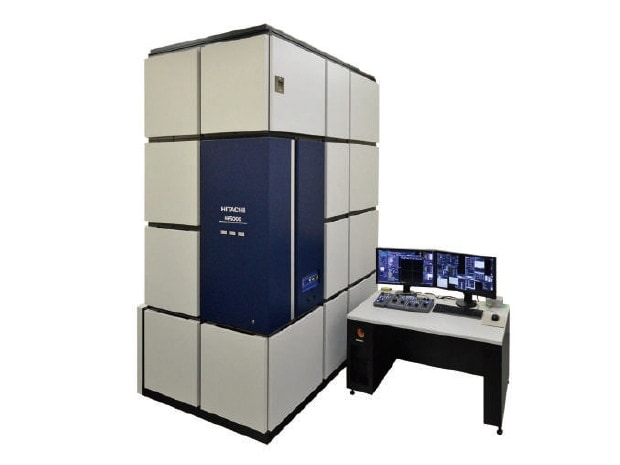 Structurally, the A site cations in the perovskite are 12-fold coordinated lanthanide or alkali earth metal ions, while B site cations are 6-fold 3d transition metal ions coordinated with oxygen anions (Figure 2a). In reductive environment, exsolution begins with the oxygen escaping from the oxygen sites, the easier to be reduced B sites cations exsolved from bulk lattice, which is known as the co-segregation of cations with oxygen vacancies (Figure 2b). Subsequently, possible phase decomposition/transformation and surface reconstruction occur along with the exsolved metal nanoparticles. And after re-oxidation, nanoparticles can be dissolved back into the perovskite with the perovskite back to the original structure (Figure 2c). Such smart behavior opens the door to alleviate the poor stability and serious agglomeration problems for supported catalysts. It is worthy to take advantage of in situ instruments to have a deep insight into the exsolution/dissolution phenomena. Fig. 2 (a) Illustration of crystal structure of ABO3 perovskite oxides. Reproduced with permission2). Copyright 2020, American Chemical Society. (b) Schematic illustration of the model used to show the segregation of B sites caions. (VO means oxygen vacancy. X denotes the dopants: iron, cobalt, and molybdenum atoms). (c) Schematic representation of the exsolution and dissolution process of B sites caions. Reproduced with permission9). Copyright 2020, Wiley.

In situ observation of surface morphology

Atomic-scale analysis of the perovskite structure

Usually, metal oxide perovskites have a large particle size formed from the calcination under high temperature that is needed to form the perovskite structure (Figure 5a). The region needed for atomic-scale analysis needs to be thin enough for electron-transparent and preferably oriented along a major crystallographic axis. The thin area could be obtained through grinding or slicing up of the powders during the sample preparation. In the microscopy, the HF5000 incorporates the Cs corrector, which is very advantageous to find the appropriate areas. Figure 5b and 5c show the DF, BF, and SE-STEM images and atomic resolution STEM-EDS elemental maps of LSCFM. In the DF-STEM images, La and Sr atoms in the A sites of perovskite appear as bright spots due to their high atomic number (Z = 57 and 38), while the gray spots represent for Co, Fe and a spot of Mo atoms in the B sites of the LSCFM perovskite. The ability to observe atomic resolution SE images as shown in Figure 5b in real time is among the most powerful features of the HF5000. The atomic resolution EDS elemental maps further confirmed the distribution of each element, and the most important, we confirmed that the doped Mo element is deposited in the B sites of the perovskite clearly. 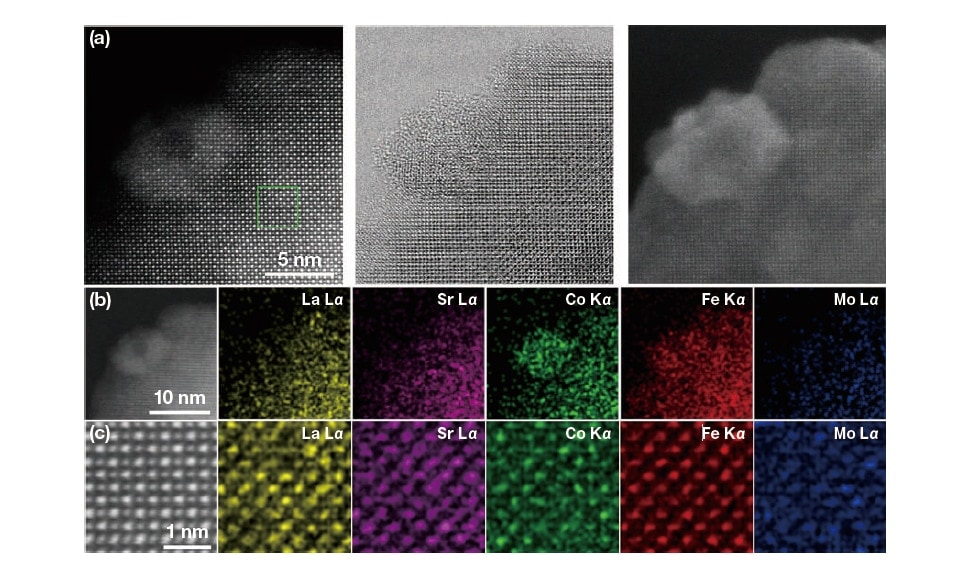 Fig. 6 Atomic-scale STEM results with STEM-EDS maps of LSCFM after reduction. (a) DF, BF, and SE-STEM images of LSCFM with an exsolved CoFe nanoparticle. (b) DF-STEM image and the corresponding STEM-EDS elemental maps. (c) Atomic-scale elemental maps of the parent perovskite, circled with a green full line in (a). The images were Wiener filtered. Reproduced with permission11). Copyright 2020, Wiley.

There have been a wide range applications of the emerging advanced HF5000. In the aspects of single-atoms catalysts13, 14）, intermetallic alloy catalyst15）, et al.

In this report, we presented the technological functions of Hitachi HF5000 (Environmental aberration-corrected TEM/STEM/SE) and our studies in the direct observation of nanoparticles exsolution/dissolution from the perovskites using HF5000. Expect for the in situ surface morphology evolution from the special SE-STEM images/ videos, this instrument also offers ultrahigh spatial and temporal resolution for structural information and atomic scale element sensitive information. Which helps us get three dimensional surface information, bulk structure and element i nformation simultaneously. HF5000 as an advanced instrument, can provide in situ and high resolution characterizations in many aspects from a wide range of research territory.

The author thanks Hitachi High-Technologies Corporation for providing Hitachi HF5000 (Environmental aberration-corrected TEM/STEM/SE) for in situ and ex situ STEM and EDS measurements. I would like to show my deeply grateful to Hiroaki Matsumoto for his exquisite workmanship.