The hydride formation system is an instrument that connects to a flame atomic absorption spectrometer to enable high-sensitivity measurements of arsenic(As), selenium(Se), and antimony(Sb) in aqueous solutions. These instruments are widely used to analyze As, Se, and Sb present in environmental water, waste water, foodstuffs, and other substances.

Our newly developed HFS-4 hydride formation system(Figure 1) retains the key performance feature of its predecessor instrument (the HFS-3), namely, that it uses flame Zeeman atomic absorption spectrometry with no baseline drift to enable highly stable measurements. In addition, this new hydride formation system significantly reduces the volume required for samples and reagents while increasing the sensitivity and analytical throughput. Moreover, the instrument is equipped with a new technology, a 4-stage peristaltic pump. As discussed in this note, this allows for the automated addition of preliminary reducing agents such as potassium iodide(KI) when analyzing As. 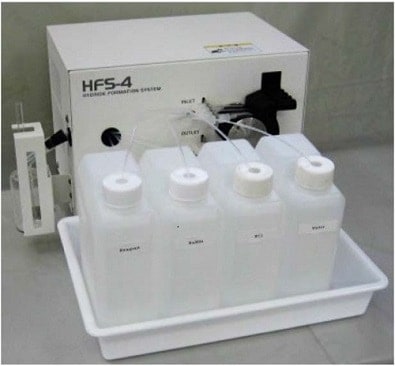 In the hydride formation-atomic absorption method, As, Se, Sb, and similar elements in a sample aqueous solution react with sodium borohydride(NaBH4) and hydrochloric acid(HCl) to yield gaseous hydrides. These are atomized using argon gas and introduced into a heated quartz cell. The elements that can be treated using the hydride-formation method are limited, but it allows highly sensitive measurements.

In foodstuffs, large quantities of As are present in the form of organic As. Because the majority of organic As does not form hydrides, organic As must be decomposed into inorganic As in advance. 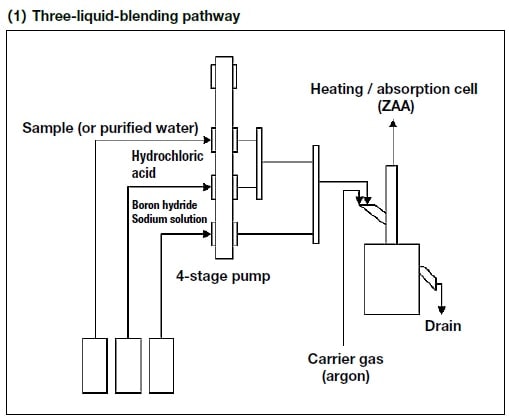 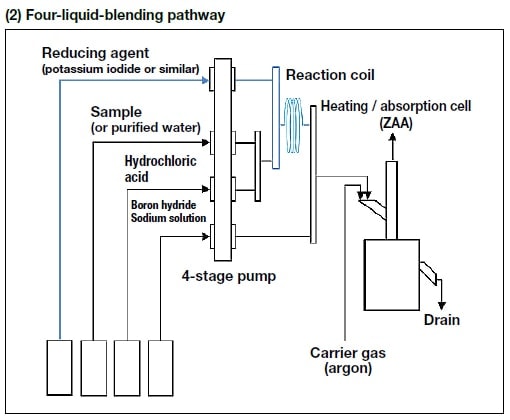 Measurement of Se in a standard sample of river water

As specified by the JIS K 0102 standard, KI should not be added for Se measurements. Therefore, we performed measurements using the three-liquid-blending pathway with the sample, HCl, and NaBH4. Here, we present measurements of Se in a standard sample of river water. Figure 4 shows the Se atomic absorption signal, while Figure 5 shows the calibration curve used. Table 3 lists the measurement conditions, while Table 4 summarizes the measurement results. The measured values lie within the accepted range of values. 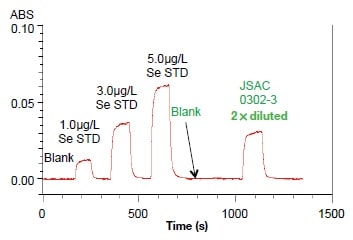 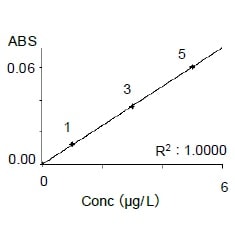 The HFS-4 hydride formation system retains the high stability of previous-generation models while offering significant reductions in the quantities of samples and reagents consumed. We expect that these struments will find an increasingly broad array of applications, primarily in environmental science and food analysis.