120 kV transmission electron microscopes (TEMs) are used in a wide variety of fields, from biomedical research to nanomaterial science, to observe and analyze the fine structure and morphology of samples. At Hitachi we have developed the HT7800 series of 120 kV TEM instruments to address this broad range of applications1).
The HT7800, designed for biomedical research, is equipped with a high-contrast lens to enable high-contrast observations over a wide field of view. The HT7800 also features acquisition of 3D image data with sample tilt angle variable over a range of ±70 degrees and 3D reconstruction function as a standard.
The HT7830, designed for nanomaterial science, achieves TEM resolution of 0.19 nm (on-axis) and STEM resolution of 1 nm. It includes Nano Analysis2) function for automatic acquisition of multiple diffraction patterns in selected areas.
For field-of-view searching, both the HT7800 and HT7830 both include Image Navigation3), a feature that offers intuitive field-of-view searching with assignment of areas in images and automatic image acquisition.
Now Hitachi has developed the HT7820, an instrument with specifications intermediate between those of the HT7800 and HT7830 and featuring a multi-purpose objective lens to meet the observational needs of both biomedical researchers and nanomaterial scientists.
In this article, we discuss the features of the HT7820—including common functionality shared by all instruments in the HT7800 series—and some applications.

Overview and Key Features of the HT7820

Figure 1 shows the external view of HT7820 120 kV TEM. The HT7800 series including the HT7820 uses a screen camera for fluorescent-plate observations to enable TEM operation in bright rooms. The high-definition, high-speed CMOS screen camera provides rapid field-of-view searching with minimal beam damage to a sample4). Moreover it enables live measurements of the image, recording images and movies on the fluorescent plate. As the predecessors in the HT7800 series, the HT7820 boasts a compact design concept with a space-saving footprint [with main unit dimensions of 199 cm (H) × 191 cm (D) × 120 cm (W)] and reduced power consumption.
Table 1 shows main specifications of HT7800 series. All instruments in the series, including the HT7820, allow the accelerating voltage ranging from a minimum of 20 kV to a maximum of 120 kV. This allows the accelerating voltage to be chosen appropriately for the purpose of observation, from high-contrast observations of unstained sample fragments to low-damage observations of carbon-based materials.

The HT7820 guarantees lattice resolution of 0.14 nm (off-axis) and a sample tilt range of ±30 degrees, primarily for research in the fields of semiconductors and soft matters such as polymers and light-weight materials. Figure 2 shows an example of a high-resolution image observation of single-crystal gold (Au); the 0.14 nm lattice spacing of the Au (220) is clearly observed. The HT7820 is equipped with Hitachi's unique dual-mode objective lens, which allows to switch between high-contrast (HC) mode and high-resolution (HR) mode depending on the purpose of observations5). As illustrated in the schematic diagram of Figure 3, the dual-mode objective lens consists of two-stages in which the objective magnetic path exists in a double-gap configuration; the OBJ2 (lower) lens may be turned on or off by switching the polarity of its coil, allowing both long (HC mode) and short (HR mode) focal length to be realized by a single lens assembly. The advantage of this design is that the transition between HC and HR modes requires switching only the polarity of the coil, with the magnitude of the current remaining constant to prevent thermal drift due to temperature variation.

In addition, the HT7820 includes a variety of automated functional tools—such as Image Navigation and Nano Analysis—and is compatible with Hitachi's RC16 16-mega pixel CMOS camera and many other types of cameras.

Applications of the HT7820 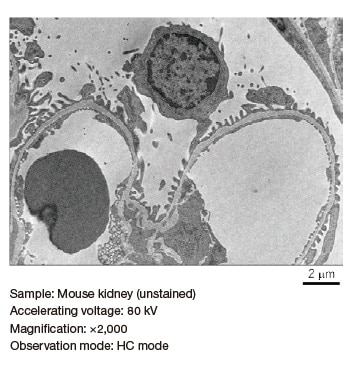 Figure 6 shows a high-resolution image of a silicon (Si) single-crystal [Figure 6 (a)] and the corresponding diffraction pattern [Figure 6 (b)]. Lattice images are clearly discernible in three directions; this capability is useful for calibration of length measurements in Si semiconductor devices. Figure 7 shows a high resolution image of a TiO2 nanoparticle, in which 0.35 nm lattice images are clearly observed. Fig. 6 High-resolution image (a) of a Si single-crystal and the corresponding diffraction pattern (b) Figure 9 illustrates the Image Navigation function for automated image acquisition. The sample is asbestos. First, a grid view is displayed on the navigation screen by a single clicking [Figure 9 (a)]. After the target area is selected, images of the target area (b) at the specified magnification (c) are captured automatically (d). This allows automated image capture for all grid sectors in which asbestos is present. The automatically-captured images are recorded to the data base with image information and displayed in a thumbnail view. The Auto drive function for moving the stage may be invoked by selecting an image corresponding to the desired field of view (e). Subsequently, the imaging process may be further automated by selecting multiple desired fields of view and specifying an imaging magnification. 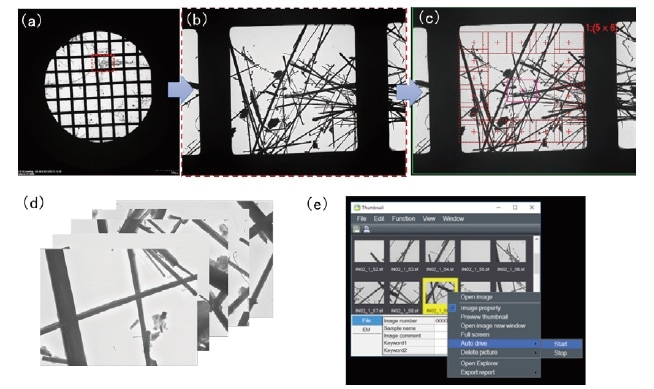 Figure 10 shows an example of automated acquisition of selected-area diffraction (SAD) patterns using the Nano Analysis function, in this case for a sample of asbestos. In TEM image, 10 regions, indicated by circles corresponding to the aperture diameter, are selected. Then the appropriate selected area aperture is inserted into the center of the screen.

By starting automatic SA-diff acquisition, the field of view and the corresponding diffraction pattern are recorded for each selected region.
Furthermore, combining with the Diffraction analysis function, matching candidates of material can be listed up from the database.
Figure 11 shows TEM images, SAD patterns, and EDX analysis results acquired by the HT7820 for asbestos samples. The addition of EDX analysis ensures the identification of asbestos.

The grid-rotation holder allows 360-degree rotation of samples mounted in a rectangular grid for TEM observations. The use of this holder allows acquisition of three-dimensional tilt images and reconstruction—even on instruments with narrow-gap objective lenses, such as the HT7820 and HT7830.
Figure 12 shows the use of this technique to obtain 3-directional images of a sample of molybdenum oxide on a holy carbon support. 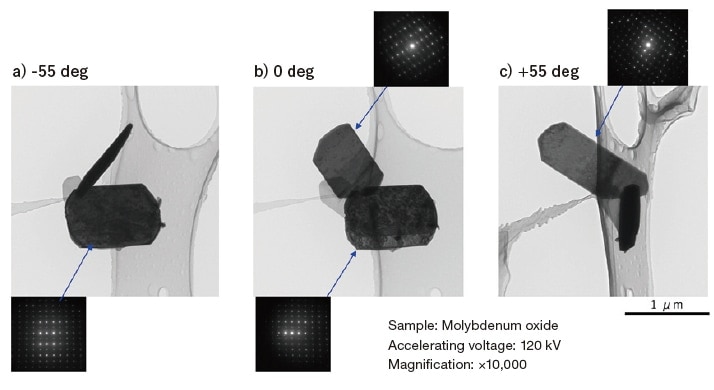 The left, center, and right panels show TEM images and SAD patterns captured at sample tilt angles of −55, 0, and +55 degrees, respectively. The multi-directional observation yields information on the morphology of the molybdenum oxide crystal and crystal orientation from SAD patterns.
With a single observed image (i.e, for tilt angle −55 degrees), it would be concluded erroneously that two types of crystal morphology—one needle-shaped and one planar—were present. The multi-directional observation clearly identifies that both crystals are in fact planar. This demonstrates the possibility of accurately determining sample morphology from just a few observations at various tilt angles. The accuracy can be further improved by increasing the number of tilt angles to produce a three-dimensional reconstruction, yielding high-precision information on crystal size and morphology.

In this article we discussed the features of Hitachi's HT7800 series—with a particular focus on the HT7820, the most recent addition to the lineup—and presented case studies of these instruments to analyze a variety of materials. The HT7820 is a versatile tool whose wide range of applications facilitates the screening and testing of many types of samples.