The HD-2700, a 200 kV Scanning Transmission Electron Microscope, can be fitted simultaneously with two X-MaxN 100 TLE (Oxford Instruments, plc) SDDs, which are elemental analysis instruments that use characteristic X-rays (Fig. 1). X-ray detection sensitivity increases with the solid angle in which the detector receives X-rays. In the present development, the shape and geometry of the objective lens and SDD sensors were optimized. For each detector the solid angle of X-ray detection over 1 sr was achieved.The dual SDDs were positioned at angles of 90° and 270° in relation to the tilting axis of the sample-holder, and the combined nominal solid angle was over 2 sr, enabling analysis with higher sensitivity and throughput than those possible with previous systems. Figure 2 shows an example of an atomic-resolution EDX elemental map of a gallium arsenide single crystal sample with <011> orientation, obtained using an HD-2700 with a spherical aberration corrector, and dual SDDs. The acceleration voltage is 200 kV, the pixel number is 128 × 96, and the acquisition time is 12 minutes. A clear EDX map showing the sites of gallium and arsenic atomic columns with 140 pm of spacing was obtained, and it was confirmed that this system can be applied to high-resolution EDX mapping at the atomic level. 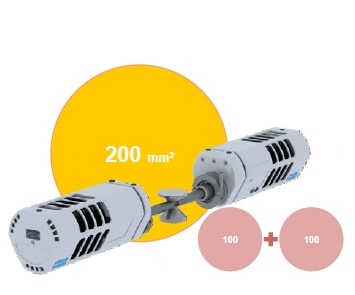