In previous work, the author and collaborators observed retention of hydrophobic anions (nitrate, iodide, and thiocyanate) via polyethylene glycol applied as a physical coating to hydrophobic stationary phases such as C30.1) Because the retention of sample anions increases as the concentration of the eluent rises, by using a high-concentration eluent we successfully measured quantities of iodide and thiocyanate ions in seawater.2) We believe that anions are retained by their distribution with respect to the polyethylene glycol phase. In this report, we describe efforts to develop chemically-bound stationary phases based on polyoxyethylene groups to improve the stability of the stationary phase.

Aminopropyl silica (0.2 g) and a methyl polyethylene glycol N-hydroxysuccinimide (NHS) imide ester reagent (0.1 g) were added to a phosphate buffer solution (pH 7.0), allowed to rest for 30 minutes at room temperature, rinsed with water and methanol and then filled into a fused-silica capillary. Figure 1 shows the reaction scheme expected for this step.3) Because the NHS imide ester reagent used in this reaction is expensive, it is most useful for capillary LC measurements that require only small quantities of a stationary phase in the column. 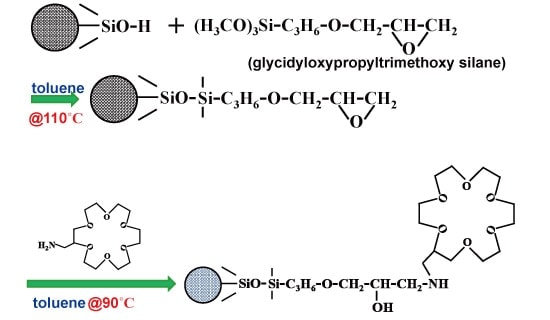 Meanwhile, the 18-crown-6-ether-bound stationary phase also exhibited crown ether complexation with cations in the eluent, suggesting that the trapped cations function as ion-exchange groups for anions.4) In this case, the extent of the retention varies depending on the type of cation in the eluent; cations that form more stable complexes with crown ethers tend to result in greater retention. 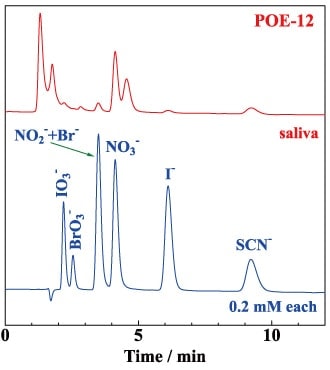 We expect that the polyoxyethylene stationary phases we have developed should find application to the separation and quantitative measurement of inorganic anions via ion-exchange mode and to the separation of polar compounds via HILIC mode.