Antibodies play an important role in the immune system that protects the body because of their intrinsic specificity towards antigens. These highly selective antigen-antibody reactions are frequently utilized in various enzyme-linked immunosorbent assays (ELISAs) and used in quantitative analysis such as the diagnosis of disease, analysis of food products, and assessment of the environment. Recently, antibody-based pharmaceuticals have also been developed, and such drugs have shown a high degree of therapeutic efficacy in targeting and attacking cancer cells with pinpoint accuracy because of their highly specific molecular recognition ability.
Antibodies perform these functions very well, but because they are biological components, they are unstable and difficult to produce. Synthetic polymers that mimic the functions of antibodies can simplify production and provide a high level of stability. Around 1950, a new concept was developed: forming a target molecule template within a polymer matrix to achieve the same kind of target molecule recognition capability as an antibody. Thus, the challenging process of attempting to develop an artificial antibody began. In the latter half of the 1970s, this challenge was met with the development of "molecular imprinting"1,2), which was established as a technique for templating of a target molecule within a polymer matrix. Molecular imprinting involves preparing a complex using a template (target molecule) and a functional monomer, copolymerizing the complex with a crosslinker, and then removing the template molecule to obtain a molecularly imprinted polymer (MIP) with a binding cavity that is complementary in size and shape to the template molecule (Fig. 1). Because they can be synthesized in simple procedure, MIPs initially showed promise as artificial antibodies to be alternatives of natural occurring ones. Unfortunately, however, previously reported MIPs were fabricated based on technology that was essentially established in the 1970s, so they exhibited only a single function, such as molecular recognition, and they entirely lacked the multifunctionality of natural antibodies and enzymes.

Taking a hint from post-translational modification, which is the final process in protein biosynthesis in cells, we recently succeeded in performing site-specific chemical modification within the imprinted cavity of a fabricated MIP to impart, convert, or adjust MIP functionality. We designated this process post-imprinting modification (PIM) 3-10). Here, we describe the use of an MIP4) that can translate binding events into a change in fluorescence as an overview of the development of novel PIM-based MIPs capable of exceeding natural antibody functionality.

Natural antibodies exhibit high specificity and affinity toward antigens and therefore are used in enzyme-based immunoassays such as ELISAs. With the exception of the antibody fragments, Q-body reported by Ueda et al of Tokyo Institute of Technology11), however, it is extremely difficult to prepare an antibody that enables binding events visualization, so the mainstream approach is a sandwich assay that requires the combination of a capturing antibody and a detection antibody. Rapid quantitation cannot be expected with methods such as this that involve repeated washing and addition of reagents, and real-time monitoring is also impossible. If a fluorescent functional monomer is used for preparation of MIP, fluorescent signaling MIP can be prepared and binding behavior of target molecule can be detected by measuring fluorescence of the MIP. However, if some of the fluorescent functional monomers are arranged randomly in an MIP matrix, the background fluorescence can become too high, leading to problems such as a decrease in detection sensitivity.
We reasoned that if the PIM technique that we developed can be used to site-specifically introduce both an interactive site and a fluorescent reporter molecule into the imprinted cavity of an MIP, we could prevent nonspecific adsorption, and the binding events in the imprinted cavity could be readout via a change in fluorescence (fabrication of a fluorescent signaling MIP). In the molecular imprinting process, functional monomers with reversible bonds would be conjugated with the target protein via covalent bonds, and after polymerization, removing the target protein by cleaving the reversible bonds, the functional groups comprising one end of the cleaved reversible bonds should remain in the imprinted cavity. In principle, these residual functional groups would only exist within the imprinted cavity, therefore the functional groups such as a interacting group and fluorescent reporter dye can be only introduced within the imprinted cavity. 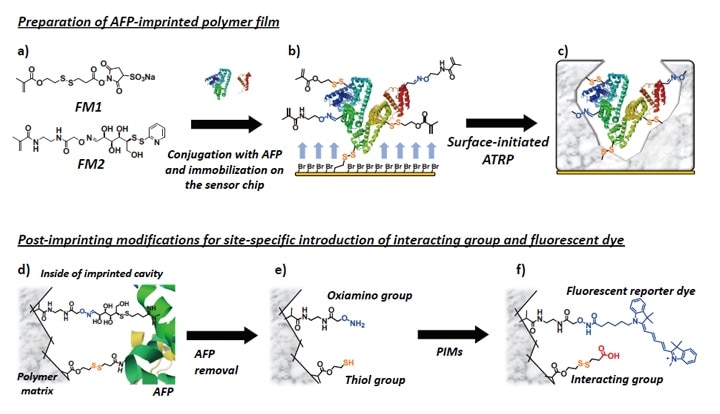 Fig. 2 Preparation of the AFP imprinted cavity and introduction of an interactive site and fluorescent reporter molecule with PIM4)

In this article we describe the highly sensitive and selective sensing of α-fetoprotein (AFP), a biomarker protein in liver cancer and liver diseases, using a PIM-processed MIP4). First, we designed and synthesized two types of novel functional monomers (FM1 and FM2) with reversible bonds (oxime bond and disulfide bond) for PIM (Fig. 2a). Then, the designed monomers were attached to the surface amino acid residues of AFP by covalent bonds and immobilized on the sensor substrate as the template molecule (Fig. 2b). Next, polymer thin films with ca. 10 nm thickness was fabricated by surface-initiated atom transfer radical polymerization, which enables adjustment of the polymer film thickness during polymerization (Fig. 2c). Finally, an imprinted cavity to fit the shape of AFP was created by cleaving the disulfide and oxime bonds to remove the AFP moiety from the interior of the polymer thin film. A free thiol group and free aminooxy group remained in the cavity after cleavage of the disulfide and oxime bonds (Fig. 2d, 2e). Please note that these two types of functional groups originated from the reversible bonds that were introduced onto the polymer while covalently bonded to AFP, so in principle, they are only present in the imprinted cavity. Therefore, a PIM procedure performed after the imprinted cavity has been formed is a selective modification of the interior of the cavity. In this instance, we attached the functional group for interacting with AFP (carboxy group) to the thiol group and the fluorescent reporter molecule (Cy5) to the oxyamino group (Fig. 2f). As a result, the interactive site and fluorescent reporter molecule are positioned only in the imprinted cavity, which expect to prevent nonspecific adsorption and decreased sensitivity due to background fluorescence. This enabled synthesis of an MIP that recognizes and detects AFP with high sensitivity and selectivity.
We employed fluorescence microscopy to compare the sensing detection limit of the same sensor chip in which we had formed the MIP with that of the BIACORE 3000, a surface plasmon resonance sensing system widely used as a high sensitive biosensor. We found that with fluorescence sensing, the detection limit was 20 ng/mL (280 pM) with the BIACORE 3000; however, the detection limit of our sensor chip was 20-fold greater, at 1 ng/mL (14 pM), even though we had used the same MIP thin film. Thus, we achieved a detection sensitivity comparable to that of a commercially available ELISA. We attribute this difference to the fact that the BIACORE 3000 detects all substances that bind with the MIP, but because fluorescence was only introduced into the imprinted cavity by PIM, binding of AFP to the imprinted cavity was detected with greater sensitivity using fluorescence sensing. Moreover, the sensor chip detected almost no human serum albumin or prostate-specific antigen (a biomarker for prostate cancer), further demonstrating the high level of selectivity. To verify the effectiveness of PIM, we introduced hydroxyl groups in the imprinted cavity in place of the interactive (carboxy) group. We observed almost no binding of AFP. Because the thiol group definitely remained inside the cavity, which serves as reactive site for the PIM, it was clear that by performing PIM carboxy group was successfully introduced into the position within the cavity, which is suitable for AFP binding.

Here, we demonstrated the possibility of constructing an artificial antibody with excellent binding affinity and detection sensitivity for a target protein using a combination of molecular imprinting that utilizes functional monomers with reversible bonds and multi-step PIMs. The resulting detection sensitivity of prepared MIP is comparable to that of ELISA and quite adequate for clinical applications. An important characteristic of this MIP-based fluorescence sensing technique is that it does not require troublesome procedures such as multi-step reagent addition, and it is vastly superior to ELISA in terms of operability. Moreover, because PIM enables easy site-specific functional group conversion, it is also possible to perform in-cavity screening in an imprinted cavity that contains an interactive site and a fluorescent reporter molecule; an artificial antibody with even greater sensitivity and selectivity can be obtained through optimization to achieve highly sensitive and highly selective detection. A drug delivery system based on MIP nanoparticles was also recently reported12), therefore molecular imprinting is evolving into a breakthrough technology. Molecular imprinting is increasingly exerting a ripple effect and significantly impacting fields that utilize antibodies extensively, such as the life sciences and biotechnology. In a sense, surpassing the functions of antibodies has been a dreamlike fantasy for researchers working with MIPs and other artificial biomimetic functional materials. We want to emphasize, however, that the possibility of "Beyond Natural Antibodies" has finally become visible on the horizon. Molecular imprinting has been well worth the wait.