Biopharmaceuticals in general, and antibodies in particular, offer a number of key advantages—including unique therapeutic effects, minimal side effects, and high stability within the human body—that have spurred rapid advances in development over the past few years. One especially prominent example is Nivolumab (commercial name Opdivo), an antibody therapy for malignant melanoma (non-small-cell lung cancer and renal cell carcinoma) developed by researchers including Dr. Tasuku Honjo, co-recipient of the 2018 Nobel Prize in Physiology or Medicine.
The conventional approach to producing antibodies via cell cultivation is a laborious process involving complicated pre-processing and multiple stages of purification to achieve isolation. In contrast, the development of antibodybased pharmaceuticals will require the production of more than hundreds of kilograms of target antibodies per year, creating a need for high-speed techniques capable of high-volume purification. In addition, the screening of antibodies at the stages of drug development will require techniques for rapid analysis of multiple test bodies. In general, both purification and analysis make use of affinity chromatography—a method that exploits the characteristic nature of protein-protein interactions—as a separation technique. The separation of immunoglobulin-G (IgG), using a separating agent consisting of protein A immobilized on cross-linked agarose, is a classic example, but it is difficult to increase water permeability and reduce cost beyond the current state of the art. Thus, the challenges of simplifying, accelerating, and reducing the cost of separation and purification—key components of the development process—represent the central bottlenecks impeding a more rapid expansion of antibody-based pharmaceuticals.

We have pursued a research program targeting the development of a novel column for affinity chromatography; a key role in the design of our new column is played by spongy monolith (SPM), a highly water-permeable porous resin made from relatively inexpensive general-purpose synthetic resin. In contrast to typical particulate fillers, SPM is a soft material whose use dramatically improves operational convenience, allowing columns to be fabricated with ease. As an additional advantage, SPM exhibits continuous chains of large (10 micrometres or larger) through-pores that allow high water-permeation velocities more than 10 times greater than typical values while maintaining low applied pressure.
In this work, with the goal of realizing a novel SPM containing epoxy groups to which proteins can bind, we developed an ethylene-glycidyl-methacrylate copolymer (PEGM) substrate SPM. After immersing this SPM in a liquid-chromatography (LC) column, we established immobilization of protein A (ProA-SPM) and attempted high-speed separation of IgG. Using similar procedures we fabricated an SPM column with immobilized pepsin (Pep-SPM) to investigate applications to online digestion of antibodies.

In tests of ProA-SPM using the target protein IgG under gradient elution conditions, we successfully obtained IgG peaks by adjusting the mobile phase from neutral to acidic. In tests involving a sample of bovine serum albumin (BSA), BSA eluted in the same time as the solvent peak, suggesting the expression of characteristic interactions between protein A and IgG. We next performed high-flow-rate tests to assess the performance of our new ProA-SPM column. In these tests, for purposes of comparison, we evaluated both our ProA-SPM column and a commercially available protein-A LC column (ProA-column) under the same conditions; whereas the ProA-column exhibited flow-through peaks as the flow rate was increased, our ProA-SPM column provided a good recovery rate even at a high flow rate of 9.0 mL/min. Moreover, with Pep-SPM we observed good antibody digestion even under relatively high-flow-rate conditions (100 mL/h). These findings demonstrate the promising potential of the novel sponge-like materials we have developed as a new platform for affinity reactions. 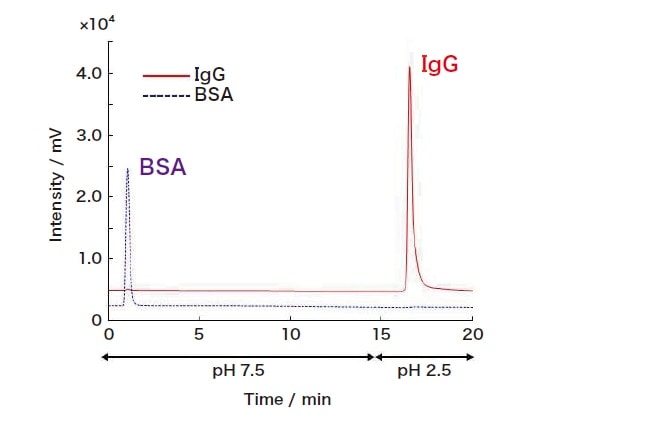 Fig. 2 Characteristic retention of IgG via a ProA-SPM column The research reported here offers the promise of helping to simplify, accelerate, and reduce the cost of separation and purification procedures in the rapidly developing arena of antibody-based pharmaceuticals. Moreover, our work presents new possibilities as a novel platform for protein-protein interactions, which may help to accelerate the development of biopharmaceuticals and facilitate structural analysis of new antibodies.
The research reported here was spearheaded primarily by Associate Professor Takuya Kubo, a member of the author's laboratory.