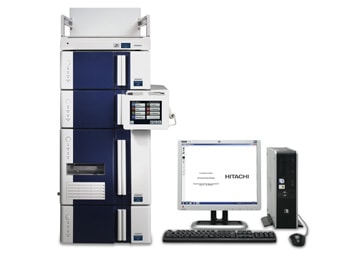 Supporting the operation of Chromaster modules.

The ease of use inherited from the D-2000 Elite opereratability

The Chromaster System Manager continues with the ease of use of the D-2000 Elite which has long, rave reputations.
User-friendly Graphical User Interface (GUI) assists the intuitive operation of the Chromaster modules.

The Chromaster System Manager uses USB for the communication between PC and Chromaster modules. No special boards are required on the PC.

Simply click the icons provided in the tool box on the left side of the screen, in a logical sequence from the top. The icons open the screens needed for measurement so that you can operate the system with confidence.

One PC can control two Chromaster systems. It improves analysis efficiency and ease-of-use of the systems. Note that only one of the two systems, not both, can contain a DAD.

Auto-operation by means of sleep/wakeup features

These features automatically stop the operation upon termination of a continuous analysis and resume the run at a specified time.
The sleep feature stops the pumping of solvent, halts column oven temperature control, and turns off the detector lamp. The wakeup feature starts the warm-up (starts pumping, begins column oven temperature control, and turns on detector lamp) at a specified time.

This function splits two overlapping peaks by applying the Exponential Modified Gaussian (EMG) technique to two peaks to calculate their areas. The results of deconvolution can be verified either on the screen or on a report that is generated. In addition, quantitative calculations can be performed by using the areas of the peaks obtained through the splitting. This can be a powerful method of quantitation on peaks that are otherwise difficult to separate.

Data transfer function based on an online DDE function

While collecting data, you can automatically transfer generated reports to Microsoft® Excel®, including report headers, chromatograms, contour line diagrams (when connected to a DAD), calculation results, and confidence reports. Such reports can also be transferred when collected data are being recalculated. In addition, by using the attached summary macro program, it is possible to compile the results of multiple sets of data calculation in a table. This function can be useful to manage the results using Microsoft® Excel®.
(Requires either Microsoft® Excel® 2010 or Excel® 2013.)

Data management: Simple and easy to use

Data reliability: The effective use of log delivers a quantum jump in reliability

Controls the Chromaster 5430 DAD and the analysis of Three-dimensional chromatogram data.

The software can verify the purity of a given sample to verify whether an elution peak consists of a single component or multiple components that are difficult to separate. The software can automatically determine the purity of a sample, based upon the spectral correlation coefficients of two spots on peaks and can display results in a report. If the purity is lower than an indicated value that is entered, the system can plot the peak in red, and in green if it is higher, to produce a visually intuitive output.