This article is published by SI NEWS in collaboration with Nature Research Custom Media, a part of Springer Nature.

Caption : The new Toyota Mirai, the second generation of Mirai cars that use hydrogen as a fuel.

When Toyota announced its new Mirai fuel-cell electric vehicle in December 2020, the focus was on the design and performance features: longer cruising ranges, greater seating capacity and a stylish exterior makeover. What did not make the headlines were groundbreaking manufacturing innovations that will increase the number of zero-emission fuel-cell electric vehicles on the road and contribute to the slowing of global warming due to carbon emissions. This is a vital step since many governments around the world have pledged to make their economies carbon neutral in the next few decades. Hitachi High-Tech joined forces with Toyota to make these innovations a reality. Caption : The fuel-cell stack (the silver box above the rear axle) of the new Toyota Mirai. The yellow canisters are hydrogen-storage tanks.

Redesigning the heart of Mirai

Fuel-cell electric vehicles produce the electricity needed to power their electric motors via a chemical reaction that involves hydrogen and oxygen in the fuel-cell stack, the heart of fuel-cell electric vehicles. The fuel-cell stack in the second-generation Mirai contains 330 fuel cells. At the centre of each fuel cell are proton-exchange membranes, which are sandwiched between bipolar plates, gaseous diffusion layers and catalysts. Oxygen drawn in from air outside the vehicle is fed to the cathode side of each bipolar plate, while hydrogen is fed to the anode side. The catalyst separates hydrogen into protons and electrons, of which the latter are forced into an external circuit, generating electricity for the motor. The only other product of the chemical reaction is water — no polluting gases are emitted. 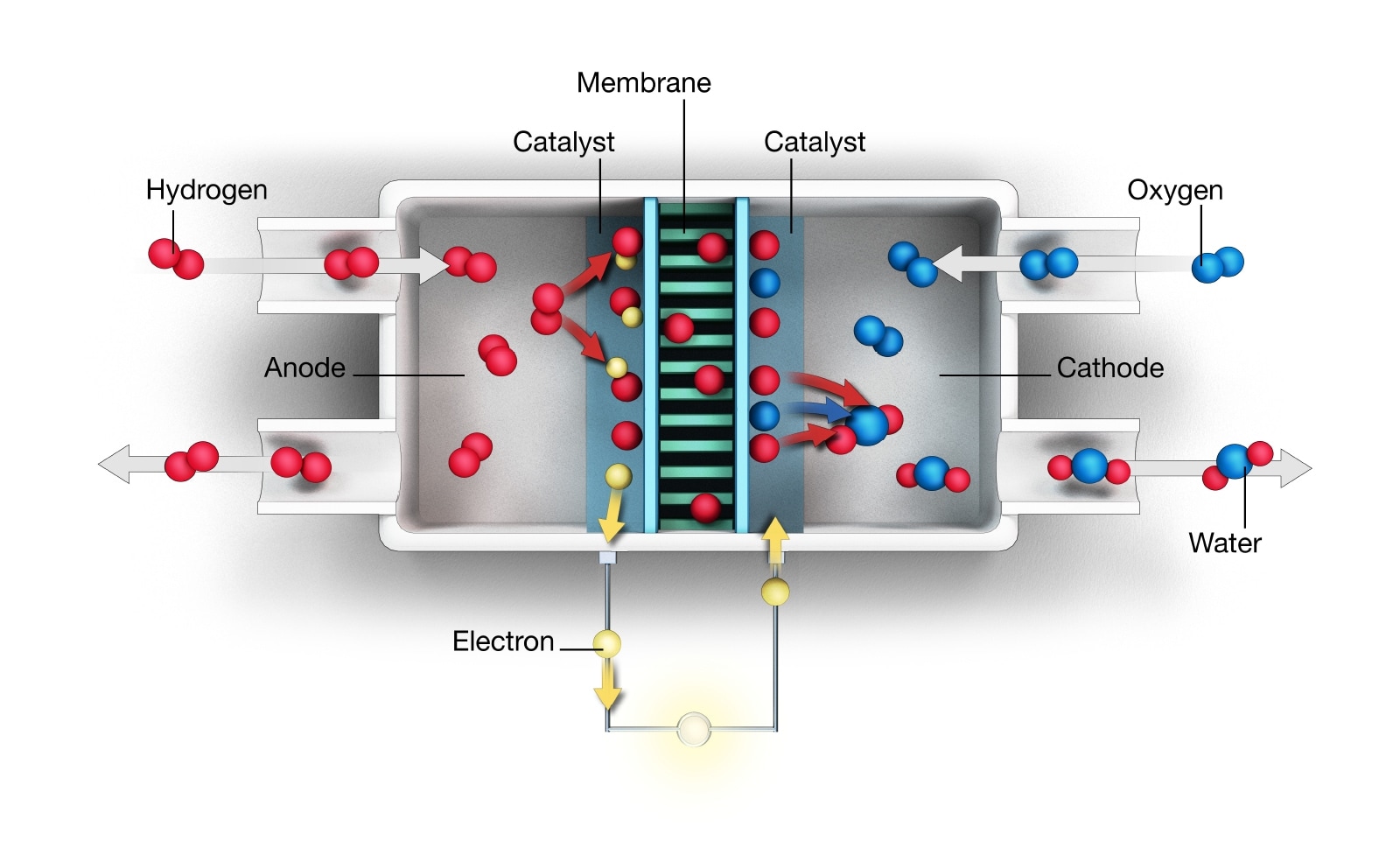 Caption : A schematic illustration of a hydrogen fuel cell. Hydrogen nuclei (pairs of red spheres) are separated from their electrons (yellow spheres). The flow of electrons generates an electric current, which powers the car. The hydrogen nuclei pass through a membrane (centre) and then combine with the electrons and oxygen (blue) from the air to form steam. Water is the only waste product.

In order to make the fuel-cell stack in the new Mirai smaller, cheaper and more efficient, the proton-exchange membrane in the fuel cells was made thinner to enhance its proton conductivity. But that made the membranes more susceptible to metallic particles introduced during the manufacturing process. These particles can lower the membrane’s resistance to chemical deterioration, which, if left unchecked, can reduce the fuel cell’s fuel efficiency and power generation. To ensure the quality of fuel cells, it was vital to weed out any cells that had been contaminated with metallic particles during production. The engineering team thus needed a reliable and efficient way to check the cells for foreign matter.

Since optical inspections were impractical, the team turned to X-rays, which have the power to see through surrounding structures. The concept sounded good in theory. “But it turned out that we had a major problem with X-ray inspection technology,” says Shinya Takeshita, an engineer in the Fuel Cell Manufacturing Division of Toyota’s ZEV Factory. “The foreign metallic matter was showing up as flat two-dimensional shadows in the X-ray images. To judge whether they would actually cause membrane deterioration, we needed to determine their sizes in three dimensions.”

Three-dimensional X-ray computed tomography can grasp such fine detail, but a single measurement with this technology takes several hours — an impossible constraint for the mass production of vehicles. Takeshita needed results in seconds. So he consulted with Toyota partner Hitachi High-Tech Science Corporation, which manufactures measurement and analysis equipment. Founded in 2000, Hitachi High-Tech produces everything from electron microscopes and focused ion-beam systems to X-ray detection systems. Its extensive expertise proved vital in the redesign of the zero-emission Mirai.

The two companies worked together to develop an X-ray inspection system that could rapidly and accurately infer the size of foreign particles. Takeshita looked at some experimental data that showed a correlation between the two-dimensional size of foreign matter and the darkness of shadows in X-ray images, in addition to a correlation between the thickness of the foreign matter and the shadow darkness. While pondering the reason for this relationship, Hitachi High-Tech project leader Toshiyuki Takahara suggested it could be caused by diffraction, a phenomenon where light bends around the edges of objects in its path. The proverbial light bulb lit up in Takeshita’s head.

The pair reasoned that because the darkness of the shadows on X-ray images intensifies with the amount of diffraction, the phenomenon could be used to estimate the three-dimensional size of foreign matter. Experiments confirmed this effect, and the two cooperated on developing a new inspection system that can determine the presence of detrimental foreign matter in a fuel cell in just a few seconds. After building a prototype, they gathered data on how to stabilize the system for a noisy environment like the production line and then put it to work. The result was a rapid, accurate and automated inspection system that can detect foreign matter in the cell production line in a few seconds.

“One of the most critical features of our inspection system is that it’s among the fastest in the world,” says Takahara. “As suppliers to Toyota, we shared a common goal of producing one of the best fuel-cell stacks and automobiles in the world, while doing our part by contributing to society.” 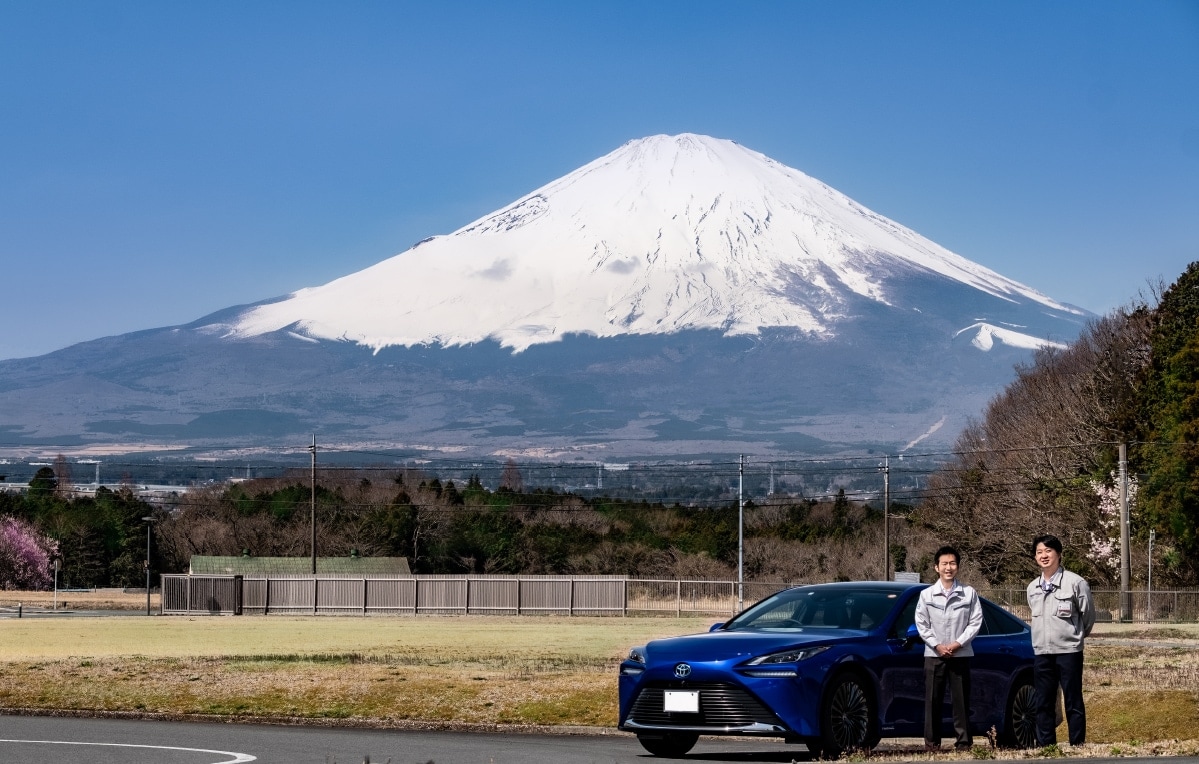 “We have succeeded in developing inspection technology and processes that contribute to the mass production of high-performance and high-quality cells,” says Takeshita. “Not only Takahara, but also many others, including equipment manufacturers, suppliers, and the Toyota development team, cooperated in this project. I believe our teamwork accelerated the development of this new technology.” 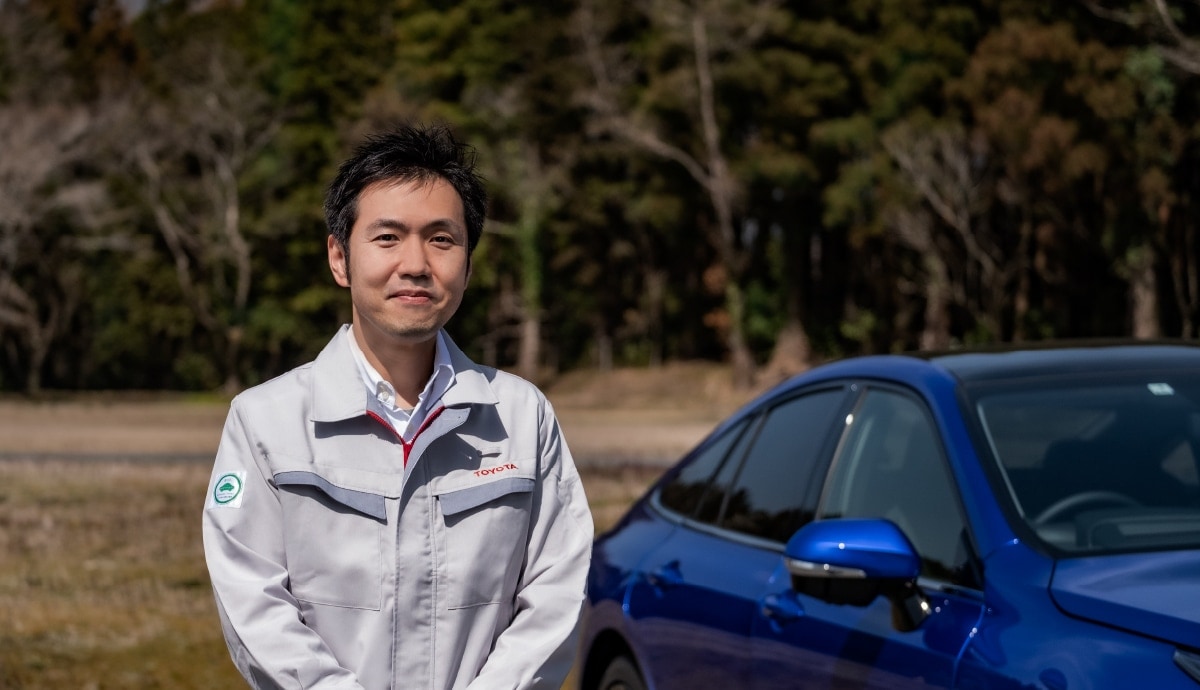 “The mission of the new Mirai is to be the automobile that will serve as the starting point for disseminating hydrogen in a fundamental manner,” Toyota Chief Technology Officer Masahiko Maeda said in introducing the vehicle at the Mirai launch (see video below; 8:32). “Toyota sees its role as expanding mobility that makes use of hydrogen throughout the world. We believe that this is connected to Toyota’s new mission of ‘producing happiness for all.’”

“I’m convinced that our work will hasten the realization of a hydrogen-based society and a prosperous future,” says Takeshita. “We intend to improve this technology and move it towards the next stage.” This article was made for Hitachi-High-Tech by Nature Research Custom Media, part of Springer Nature. 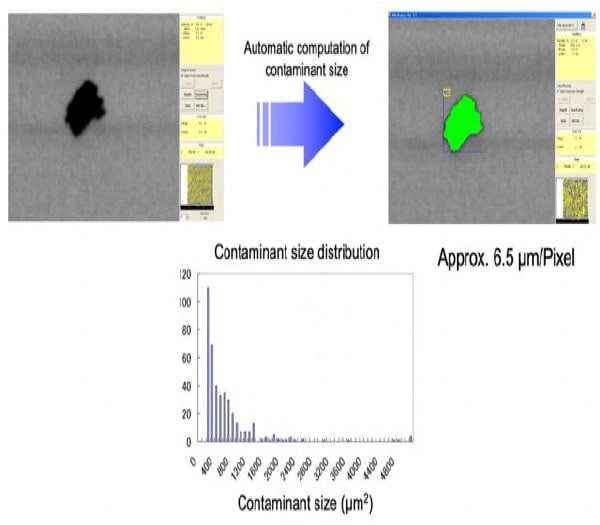 Along with measures for reducing the load on the environment, development of fuel cells and electric vehicles using rechargeable batteries has proceeded with the aim of reducing CO2 emissions. For the LIBs, fuel cells, and other components used for this purpose, greater safety and quality is required particularly in automotive applications. Metal particle contamination in batteries is one cause of degrading reliability and quality, making this an important aspect of quality control. To satisfy this new demand, Hitachi High-Tech Science has developed X-ray technology and equipment to detect and identify fine metal particles.
（Hitachi Review Vol. 65 (2016), No. 7）