Polymer particles with sizes in the range 3 to 20 &micro;m are extensively used for analytical purposes such as environmental analysis including air samplers, solid-phase extraction materials, and HPLC columns. For air amplers, in addition to applications to environmental chemicals such as formaldehyde, NOx, and VOC, precise pore size adjustment technology and background reduction techniques are essential in order to measure individual posures and exposures in working environments. For solid-phase extraction, we have developed materials that ploit polymer particles to make hydrophobic interaction, ion exchange, chelates, and other functionalities which are widely use in water quality, medical and pharmaceutical analysis. Development of HPLC columns has began around 1980 and resulted in the development of a series of polymer-based columns which have turned into commercial products, including analysis SEC columns, preparative SEC columns, sugar and organic acid analysis columns, aqueous SEC columns, reverse-phase partition columns, and ion chromatography columns.

A schematic overview of our method for synthesizing monodisperse particles using seed polymerization is shown in Figure 1. Seed articles ranging in size from 0.4 to 1 µm are produced via soap-free emulsion polymerization 2); these particles then absorb monomers and porogen to swell by a factor of 10 to 500, after which they are polymerized via thermal polymerization in configurations that preserve particle shape3). From Figures 2 and 3, suggest that the CV value (standard deviation / mean particle size × 100), which quantifies the sharpness of the particle size distribution for monodisperse particles, is smaller than the values seen for particles formed by suspension polymerization and the corresponding particle classification.

Having thus confirmed that the seed polymerization method yields monodisperse particles with sharper particle size distribution than suspension polymerization, we next synthesized both acrylic base hydrophilic and styrene based hydrophobic monodisperse polymer articles and applied these polymers to SEC columns for proteins and other organic compounds analysis. 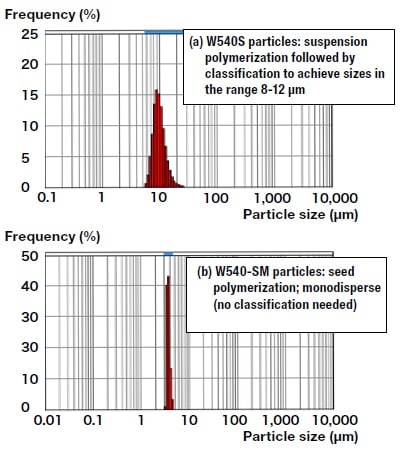 A stainless-steel column (4.6 mm I.D. × 150 mm L) was packed with the monodisperse particles and its synthesize process is described above. The column (W540-SM) was then assessed using device 1 (HPLC) and device 2 (UHPLC). Table 2 shows the theoretical plate number and the column pressure, and Figure 5 shows chromatograms.

The specifications of newly developed W540-SM column (4.6 mm I.D. × 150 mm L) and conventional Gelpack W540S column (7.5 mm I.D. × 300 mm L) are shown in Table 2. For the conventional Gelpack W540S column's height equivalent of a theoretical plate (HETP)4)was consistent at 23 µm (theoretical plate number 13,000) for both devices 1 and 2. In contrast, newly developed W540-SM column's analytical results by device 1 shows HETP was 21 µm (theoretical plate number 7,100), which is not significantly different from that of the conventional product; however, for device 2 the HETP was 9 µm (theoretical plate number 16,000), which indicates a significant improvement and close to the theoretical value. Since the cell size and flow pathway are smaller for device 2 than for device 1, there is less diffusion within the device 2 than device 15), and thus the small monodisperse particle column W540-SM exhibited performance similar to that of conventional products. Therefore for future compatibility with HPLC systems, we believe that it is important to develop analytical columns using monodisperse particles with sizes on the order of 3.5 µm. Fig.5 Comparison of chromatograms for the two devices.

We packed monodisperse particles and suspension polymerization particles into stainless-steel columns (20 mm I.D.×600 mm L) to obtain columns P212MD, P213MD, P212L, and P213L. The characterizations of these columns were shown in Table 4.

The theoretical plate number of monodisperse particles packed P212MD and P213MD columns were 40,000 and 41,000 respectively. These values are 2.3 times of conventional columns (P212L and P213L), since the particle size distribution is sharper and this is consistent with theoretical value based on the particle size. Moreover, even though the monodisperse particle size was reduced to 8µm, the column pressure remained the same as suspension polymerization particles packed column since ratio of cross-linking monomer was increased. T he calibration curve shown in Figure 7 indicates that the exclusion limit molecular weight is 5,000 for P212MD and 20,000 for P213MD. Fig.9 Comparison of chromatograms obtained from columns of suspension-polymerization particles and monodisperse particles

We investigated the applications of monodisperse polymer particles to HPLC columns.

Based on these findings, we conclude that the application of monodisperse particles to HPLC columns offers the promise of significant improvements in the column performance, including in areas such as separating ability and throughput.

For protein analysis SEC columns, our goal is to gain more compatibility on separation with various HPLC and UPLC equipment. For preparative SEC columns, we will introduce column which is capable of analyzing samples in which exclusion limit molecular weight of 100,000. Our goal is to bring these products to the market near future.