Polyimides (PIs) are polymers that have dense aggregation structures and highly ordered structures arising from the rigid chemical structure and strong intermolecular interactions. For this reason, PIs can be used to produce super engineering plastics, with properties such as high tolerance to high and low temperatures, outstanding mechanical characteristics, and the ability to withstand exposure to light and radioactivity for long periods of time; they are widely used in fields such as the semiconductor and aerospace industries.1) In recent years, polymer thin films with the ability to absorb ultraviolet light and emit visible light—wavelength-converting properties—have been a focus of intense interest, and have promising potential applications as wavelength-conversion films (downconverters).2-4) When positioned on the outermost surface of a commercial silicon-based solar cell, downconverters transform ultraviolet radiation—for which silicon has poor spectroscopic sensitivity—to the visible radiation, where the sensitivity is higher; this improves the total photoelectric conversion efficiency of the device. The practical ability to fabricate such wavelength converters from luminescent PIs offers the possibility of designing highly efficient and durable solar cells.

The essential luminescence properties required for downconverters are high transparency in the visible region, high luminescence quantum efficiency, and a large Stokes shift. Stokes shift is energy difference between the wavelengths of the absorption and emission peaks; the larger the Stokes shift, the higher the effi ciency with which ultraviolet radiation is converted to longer-wavelength visible or near-infrared light. In our recent studies targeting the development of novel PI thin films exhibiting these properties, we have focused on room-temperature phosphorescence. The highly fluorescent PI thin films that we have developed thus far exhibit relatively small fluorescence Stokes shifts; thus, in case that PIs are designed to give colorless, transparent films, they exhibit signifi cant emission only in the short-wavelength region of the visible spectrum (violet-blue), while for thin films designed to have signifi cant emission at longer wavelengths (green-red), yellow or red coloration of the film was unavoidable (Fig. 1).5,6) Unlike fluorescence, phosphorescence is emission from an excited triplet state lying at a low energy level that proceeds via an intersystem crossing, generally resulting in a large Stokes shift. In the past, it was believed that phosphorescence could only be observed for (a) heavy metals, rare-earth complexes, and other systems exploiting the effects of heavy atoms in organic compounds, or environments in which molecular motion is frozen or otherwise suppressed, such as (b) highly crystalline materials, or (c) systems at low temperatures, such as the temperature of liquid nitrogen (77 K). However, it has recently been reported that organic carbonyl compounds with heavy-halogen atoms such as bromine or iodine can exhibit phosphorescence near room temperature.7) In recent work, we have discovered that semi-aromatic PIs and low-molecular-weight imide compounds containing bromine or iodine in their dianhydride moiety can exhibit room-temperature phosphorescence with extremely large Stokes shifts (on the order of 10,000 cm).1),8) In the near future, the development of PI materials suitable for applications to solar-cell downconverters using room-temperature phosphorescence will require characterization of phosphorescence properties in a variety of environments chosen to focus on practical applications. In particular, it is known that phosphorescence depends strongly on temperature and oxygen concentration in the measurement environment, so that analysis of phosphorescence at variable temperatures and in oxygen-free environments is essential.

In this article we present the results of measurements at low temperatures and in vacuum of emission spectra from two types of materials which we have developed: a low-molecular-weight phosphorescent imide compound (powder) and a PI thin film formed on a substrate.

Emission measurements at variable temperatures and in vacuum 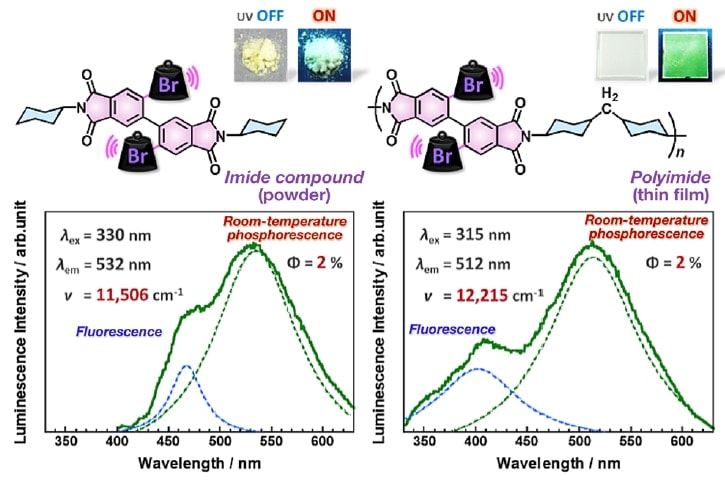 Emission spectra for a phosphorescent PI thin film in vacuum Fig 5.
Emission spectra for phosphorescent PI thin film at atmospheric pressure and in vacuum.
Only the phosphorescence peak increases in intensity in vacuum. 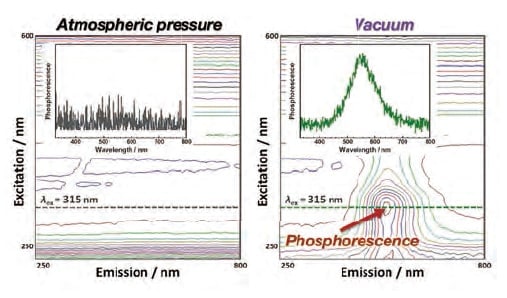 Fig 8.
Results of phosphorescence short-lifetime measurements for PI thin film at atmospheric pressure and in vacuum.

In this article we presented the results of measurements and analyses of excitation and emission spectra, at varying temperatures and under vacuum, for a room-temperature phosphorescent imide compound and a polyimide, with the objective of elucidating their characteristic phosphorescence properties. The temperature dependence of the emission spectra clearly demonstrated that differences in room-temperature molecular motion arising from the different three-dimensional and ordering structures of the imide compound (powder) and PI thin film have a strong influence on the phosphorescence properties. The emission spectrum of the PI thin film measured in vacuum revealed that oxygen molecules, present at the surface or in the interior of the film, quench the phosphorescence. The fact that the luminescence properties of the phosphorescent PI thin film depend sensitively on the temperature and oxygen concentration suggests that this material may find applications not only as wavelength-conversion films (downconverters) but also for temperature and oxygen sensing. Moreover, the fact that this material simultaneously exhibits strong resistance to high and low temperatures, illumination and harsh environments, and has the ability to emit strong luminescence at low temperatures and in vacuum, suggests potential applications to downconverters suitable for use in space. In future work, we plan to continue improving the wavelength conversion effi ciency of these materials.as well as their ability to withstand harsh climates and illumination—with an eye toward applications as sensing materials and for use in space.