From the moment of the announcement of the first amino acid analyzer by D. H. Spackman, W. H. Stein, and S. Moore in 19581), these instruments have been widely used to analyze the amino acid content of proteins and peptides and to study the amino acids and related substances present in pharmaceuticals, biological solutions, and other samples. When the original instrument was introduced, the use of ion-exchange chromatography and ninhydrin reactions—cutting-edge technologies at that time—made possible the analysis of amino acids with high selectivity, high speed, and high accuracy. Moreover, the successful use of automation techniques in the field of liquid chromatography paved the way for revolutionary new developments, establishing the introduction of amino acid analysis as a key milestone in the history of research.
More recently, the development of large numbers of peptide-based pharmaceuticals has spurred a renewed appreciation for the value of this analytical technique, which is well-suited to meet the analytical needs of fields of research that have long placed a premium on high data reliability—including research and quality control for foodstuffs, animal feed, and health supplements, as well as pharmaceutical and taste research. It is against this backdrop that Hitachi's line of amino-acid analyzers2) has evolved in a continuous progression from 1962 to the present day (Figure 1). The LA8080 high-speed amino acid analyzer is a dedicated instrument for ion-exchange chromatography via the method of post-column derivatization using ninhydrin reagents; its key features are the following 3 attributes (Figure 2).

(1) The LA8080 is comfortable.
The ergonomic design of the instrument carefully accounts for the operator's working lines and procedural motions. The use of a new technique for ninhydrin reagents—in which two liquids are blended immediately before the derivatization reaction—eliminates the need for refrigeration. Standard commercially available products may be used for the buffer liquid (eluent) and the reaction reagent.

(2) The LA8080 is compact.
AminoSAAYA is the first instrument of its type to adopt a desktop configuration, an innovative redesign of previous standalone models. Moreover, the new design occupies some 30% less surface area than its predecessors. The instrument features convenience for storing solution bottles and a vial rack, and its front-access design facilitates operations such as exchanging columns and seals.

(3) The LA8080 is reliable.
AminoSAAYA is compatible with the L-8800 and L-8900, to support many reliable data of ion-exchange chromatographic analytical methods. High-stability ninhydrin reactions ensure high precision in analyses of protein hydrolyzate and physiological fluid. 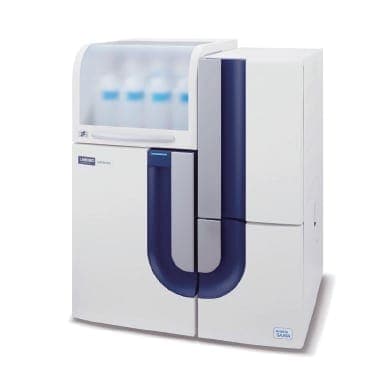 The columns of the LA8080 are packed with a strongly acidic cation exchange resin formed by introducing sulfonate groups into a polystyrene divinylbenzene-based polymer. As eluents, sodium-citrate buffer liquids are used for amino acids with approximately 20 constituents, while lithium-citrate buffer liquids are used for amino acids with approximately 40 constituents. For both eluents and reaction reagents, bottles of standard commercial products may be installed as-is, with no modification required. For both analytical methods, stepwise or gradient elution methods involving several types of buffer liquid are used to elute large numbers of constituents.
Figure 3 depicts the flow-line configuration of the analyzer. Various eluents are selected by an solenoid valve, including regenerating liquid, pump 1 can deliver up to 6 liquids. To suppress chromatogram baseline noise, a one-stroke 10 µL micropump is used to reduce pressure pulsation.
The autosampler can accommodate up to 120 test specimens in 1.5 ml vials. For cases required cold storage, such as specimen containing asparagine (AspNH2) or glutamine (GluNH2), the instrument is equipped with a cooling rack with capacity for 100 specimens.
The column oven uses a Peltier element to maintain separation columns at constant temperature. The temperature may be varied over the range 20-90°C and is time-programmable.
The two ninhydrin reagent liquids are mixed immediately before delivering. The various amino acid constituents eluted from the column mix with reagents delivered by pump 2 and are heated to 135°C by the reaction unit. A cartridge-type TDE3 (cubed) reactor method is used to reduce peak broadening to the greatest extent possible during liquid-mixture flow, as well as to ensure efficient reactions.
Amino acids are converted into the reaction products known as Ruhemann's purple3) and detected at the visible wavelength of 570 nm—where their light absorption is maximized—in the form of chromatogram peaks that may be measured and quantified. The imino acids proline and hydroxyproline do not exhibit absorption peaks in the visible regime, and are instead detected at 440 nm. Visible light at a wavelength of 700 nm is used as a detection reference, with compensating the fluctuations of a tungsten halogen lamp.
As a chromatographic data system (CDS), the LA8080 uses OpenLAB CDS Ver. 2 to control the data-acquisition apparatus and perform qualitative and quantitative data analysis of chromatograms. Fig. 3 Internal schematic and flow-line diagram of the LA8080

As a standard method of analysis, Figure 4 shows a chromatogram of protein hydrolyzate. A sodium-citrate eluent is transmitted at a flow rate of 0.40 ml/min, while a cation-exchange resin column #2622 (i. d. 4.6 mm × 60 mm) with 3 µm particle is maintained at a temperature of 57°C. Ninhydrin reagent is delivered at a flow rate of 0.35 ml/min; after producing color at a reaction temperature of 135°C, the absorption at the visible wavelength of 570 nm is detected. 20 µL of an amino-acid standard mixture is injected.
After 30 minutes of analysis, resolution of 1.2 or greater were observed in all cases. For aspartic acid (Asp), the detection limit is 2.5 pmol or below (signal-to-noise ratio of 2) with an excellent peak-area repeatability (2 nmol) within 1.0% RSD.

To analyze the amino-acid composition of proteins, one typically performs a hydrolysis treatment using hydrochloric acid; however, cysteine, cystine, and methionine are easily oxidized. For this reason, a widely used alternative method of analysis is to perform hydrochloric-acid hydrolysis treatment after oxidizing with performic acid, then analyze the resulting cysteic acid (CySO3H) and methionine sulfone (MetSON). We also present the results of a study in which CySO3H and MetSON alone were analyzed for short periods of time (Figure 5). Fig. 5 Performic-acid-oxidized protein hydrolyzate and an example of a short-time analysis

The continuing availability of the method introduced by Moore et al. may be attributed to at least two factors—one associated with the separation system, and one with the reaction-detector system. The match between polystyrene polymer ion-exchange resins and multi-constituent amino acids is excellent, while for neutral amino acids of aromatic species such as phenylalanine and tyrosine there is a hydrophobic interaction with the base polymer material that also contributes to achieving good separation. On the other hand, the method of post-column derivatization using ninhydrin has the key features of high selectivity with respect to contaminants in specimens; as long as one properly performs deproteinization and filtering, one can expect highly reliable analytical results. We are grateful indeed for the accomplishments of our predecessors in developing this outstanding method of analysis that has remained useful for many, many years.