A revision to the European Union's Restriction of Hazardous Substances (RoHS) (2011/65/EU)—a set of EU directives regarding specific toxic substances—adds four species of phthalates(*1) to the list of controlled substances as of July 2019. Phthalates are used as plasticizers added to substances such as resins and rubbers to increase flexibility. They are used particularly frequently in chloroethylene products such as sheaths for electrical wires, electrically insulating tapes, and packaging films, but also find use as materials for many other products—from toys, to appliances, to electronics, and indeed almost every type of consumer product.
The revised RoHS Directive states that, as of July 2019, any electric or electronic device—excluding medical devices and monitoring or control devices—that includes quantities of controlled substances in excess of certain fixed thresholds may no longer be sold in the European marketplace. Similar restrictions on medical devices and monitoring/control devices go into effect in July 2021. This has created a need for corporations to assess the content of phthalates in products and components and to develop strategies for controlling them.
A widely used technique for controlling environmentally restricted substances involves first conducting screening tests to identify cases in which quantities of controlled substances exceed or approach regulatory thresholds, then subjecting any such cases to more detailed analysis. However, typical methods for measuring phthalates suffer from drawbacks such as requiring time-consuming pre-processing steps and requiring expert knowledge to handle the complex instruments and the large quantities of solvents they use. This creates a need for screening instruments that are easy to operate and can make rapid measurements at procurement and production sites.
In July 2017, we introduced the Hitachi HM1000, a thermal-desorption mass spectrometer whose mission is to enable simple and rapid measurements of phthalates. Because the HM1000 does not use a column, it can screen a single sample for phthalates in under 10 minutes.
In this paper, we introduce the HM1000A, an instrument that builds on the HM1000's concept of simple and rapid measurements and uses a column-less component separation method to achieve improved screening accuracy.

The HM1000A enables rapid and simple measurements by adopting the same principles of operation as the HM1000.
Figure 1 shows an external view of the HM1000A and an overview of its principles of measurement. The instrument consists of (a) a sample heating unit that vaporizes phthalates within a sample, (b) an ionizing unit that ionizes the vaporized phthalates, and (c) a mass spectrometer that analyzes the ionized components. The ionization method used is atmospheric-pressure chemical ionization, which uses the corona discharge created by applying a voltage to a discharge needle, allowing direct analysis via soft ionization. In addition, the entire process—from sample transport to measurement, quantification, and identification—is automated by specialized software, and an autosampler allows continuous automated measurements of up to 50 samples (including standard substances and substances used for calibration) in around 8 hours. This allows users to make measurements simply by selecting from a menu of pre-programmed measurement recipes, and thus no specialized knowledge is needed to determine whether or not phthalates are present in a sample.

To enable high-speed measurements, the HM1000A avoids the use of columns and other separation mechanisms. Instead, the HM1000A employs methods of component separation that do not require columns—which we developed using fragmentation and by analyzing characteristic features of mass spectra—to separate regulated phthalates from other components such as DOTP (dioctyl terephthalate), a type of substitute plasticizer, and polymer components such as lubricants.

Fig. 1 External view of the HM1000A and its principles of measurement

To separate the structural isomers DEHP and DOTP, the HM1000A considers the distinct fragmentation profiles of the two substances. Figure 2 shows mass spectra of DEHP and DOTP (corresponding to 1,000 mg/kg). For quantitative measurements of DEHP we use m/z=391.3, at which protonated DEHP molecules are detected. For this reason, the fact that DEHP and DOTP both exhibit protonated-molecule peaks at m/z=391.3 can cause DOTP to be erroneously detected as DEHP. On the other hand, in mass spectra of DOTP one finds large numbers of fragment-ion peaks in the region below m/z=300, which we use to perform separation. Here IDOTP_Protonated (t) and IDOTP_Fragment (t) refer respectively to the intensities of DOTP protonated molecules and DOTP fragment ions. The DOTP protonated molecule intensity may be estimated from Equation (1) after obtaining DOTP fragment-ion chromatograms. Thus, as a separation method we first measure a standard sample of DOTP, then determine the relation of equation (1). Next, we measure the actual sample, obtain a chromatogram of the fragment ions arising from DOTP, and compute the ion intensity of DOTP at m/z=391.3. Then, we subtract this ion intensity from the total ion intensity at m/z=391.3 to yield a quantitative calculation of DEHP. Note that, if DOTP is not present in the actual sample, DOTP fragment ions will not be detected, and thus the method is applicable regardless of the presence or absence of DOTP in the sample.

For samples containing lubricants or other polymer components, pyrolysis may give rise to spectra with a periodicity of m/z 14 (-CH2), like that shown in Figure 4. These periodic peaks overlap with peaks for the regulated phthalates and are thus a source of false-positive detection. Mass spectra with periodicity of this sort cannot be separated solely through the use of SIM measurements, which detect only ions of specific masses.
For this reason, the HM1000A is equipped with simultaneous SIM/SCAN measurement capability, in which SIM measurements are carried out simultaneously with acquisition of mass spectra over a wide range of masses. Thus, from the periods and intensities of polymer peaks detected by SCAN measurements in the vicinity of e.g. protonated molecules of regulated phthalates, it is possible to estimate the portion of the peak intensity that causes false-positive detection and re-compute a new baseline as appropriate. Quantities of regulated phthalates may be determined using this new baseline and chromatograms obtained via SIM measurements. The HM1000A automatically executes this sequence of calculations within a single measurement. To validate the effectiveness of the two separation methods introduced in the previous two sections, we performed measurements of DEHP quantities in some 80 samples used for applications such as electric and electronic components.
Figure 5 compares the results of measurements with and without component separation vs. pyrolysis GC/MS. Because this is a screening instrument, from Figure 5 we can see that—regardless of whether component-separation was used or not—samples containing a concentration in excess of the regulated value of 1,000 ppm are not incorrectly judged to have concentration below that level. On the other hand, when component separation is not used, some samples in which the actual concentration lies below the threshold are incorrectly detected to have values above the threshold. The application of separation methods to such samples mostly allows proper identification of cases in which component quantities lie below regulatory thresholds, yielding good correlation with pyrolysis GC/MS. 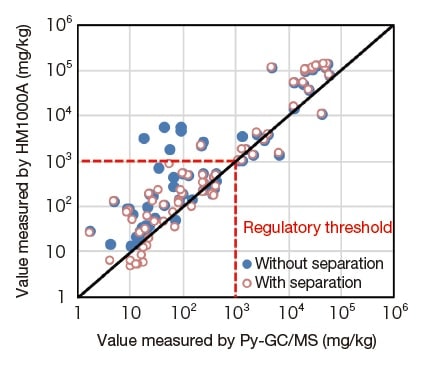 The HM1000A, a screening instrument developed for the phthalates that have become subject to new restrictions by a revision in the ROHS Directive, enables simple and rapid measurements by avoiding the use of a column. Instead, the HM1000A uses column-less methods of component separation that allow automatic correction for the potential effects of substitute plasticizers and low-molecular-weight compounds such as lubricants on screening accuracy.
This method allows workers with no specialized knowledge or expertise to make accurate screening measurements, and we are hopeful that the HM1000A will significantly increase the efficiency of the inspection process for phthalates in manufactured products and components.