Profiling of Glycans by Capillary Electrophoresis

The Building Blocks of Living Organisms: Glycans and Their World

Glycans, which are associated with proteins, lipids, and other molecular species, are distributed throughout tissues and the surfaces of cells and are responsible for a variety of physiological functions. In particular, glycans are involved in every facet of the phenomena studied in omics fields—fields which, in recent years, have begun to supply information of practical utility for pharmacology and medicine. 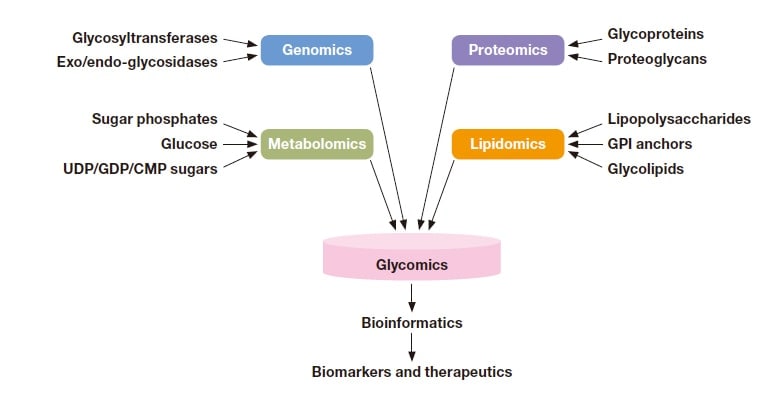 Figure 2 illustrates some typical configurations in which glycans and polysaccharide complexes exist within organisms. Glycosaminoglycans—polysaccharides whose structures consist of repeated disaccharide units— primarily bind to core proteins and form extracellular matrices for joints and skin tissue, helping to preserve the body’s flexibility. Glycolipids are important structural components of cell membranes. GPI anchors play the role of molecular matchmakers, responsible for connecting cells to enzymes and other entities. Fig. 2 Typical configurations in which glycans exist in cells.

The glycans of the glycoproteins we will discuss here bind to asparagine, serine, or threonine of polypeptides, yielding a variety of distinct structures. The number of species of glycoprotein glycans is said to be in the several hundreds, and the relationship between glycans and physiological function is a source of deep fascination.
For serious ailments such as cancer, Alzheimer-type dementia, and Huntington’s disease, the progression of the disease is accompanied by changes in the structure of glycoprotein glycans. The emergence of specific glycans, and variations in their quantities, constitute biomarkers serving as diagnostic indicators. Recent years have seen the development of biopharmaceutical therapies for a variety of ailments that are difficult to treat—including cancer, rheumatism, hepatitis C, and diabetes—and the scale of the market for these products continues to grow. It is difficult to control the structures of the glycans added to such glycoprotein agents, and factors such as cell selection and culture conditions must be carefully evaluated from the standpoint of glycans as well. In particular, humans are genetically deficient in some species contained in non-human glycans, such as N-glycolylneuraminic acid and α-linked galactose. The addition of glycans containing these structures, which may introduce immunogenicity to the human body, and risks undermining the value of biological agents.
In order for antibody drugs to exhibit pharmacological effects, their specific affinity for bonding must be accompanied by effector functions—such as antibody-dependent cellular cytotoxicity (ADCC) activity or complementdependent cytotoxicity (CDC) activity—that are important for functional expression. These types of effector activity are linked to the structure of glycans. Consequently, control of glycan structure is an important component of antibody drug development.
The preservation of glycan homeostasis is important for preserving the safety and effectiveness of glycoprotein pharmaceuticals. However, because glycans are synthesized by a sequence of glyco-related enzymes—from endoplasmic reticulum to Golgi bodies—working in concert, it is extremely difficult to control glycan biosynthesis.

The structures of the glycans that bind to glycoproteins are varied, with different glycans for different binding sites. Moreover, there exist many similar glycan structures, and the glycan content of glycoproteins is said to vary by up to four orders of magnitude. Consequently, the efficiency and data quality of glycan analysis depend heavily on the lower thresholds chosen for glycan content.
Two-dimensional polyacrylamide gel electrophoresis may be used to separate crude protein samples by molecular size and isoelectric point. Glycan profiles for a specific glycoprotein band may be studied by using an appropriate protease digestion, and then analyzing the resulting glycopeptide mixtures by liquid chromatography mass spectrometry (LC-MS). The glycopeptide sensitivity of mass spectrometry is low, and dependent on ionization conditions. For these reasons, glycans are typically separated from glycopeptides using enzymes (*1) or chemical methods (*2). In cases involving low glycan content, it is common to augment these methods by specific extraction procedures for glycans. The resulting glycan mixtures may be analyzed via mass spectrometry, but the sensitivity of this approach differs for different glycans. Thus, one may use fluorescent tagging to derive fluorescently labeled glycans for analysis via HPLC in HILIC mode (Figure 4). Separated glycans are recovered for each peak, and glycan structures may be determined via methods such as 1H-NMR and total methylation analysis together with structural estimation techniques combining exoglycosidase with MSn analysis or lectin affinity analysis. This offers high sensitivity for mass spectrometry or fluorescence detection, enabling analysis of quantities at the level of picomoles (10-12 moles). On the other hand, NMR—while providing highly reliable data—requires refined glycans at the level of micromoles (10-6 moles). Fig. 3 Techniques used in glycoproteomic analysis and a schematic depiction of the procedural flow.

Fig. 4 The differences between oligosaccharides prepared from two types of cancer cells. The glycan patterns are similar, but the concentrations are different.

Elucidating the structures of individual glycans via LC-MS-based glycan profile analysis requires a combination of techniques, including glycan-specific enrichment, lectin binding analysis, and exoglycosidase digestion. Even if one has selected only glycans that are present in large quantities, it is necessary to distinguish each of dozens of glycan species and repeatedly execute the process of separation and exoglycosidase digestions. Moreover, the glycan detection sensitivity of mass spectrometry is low; also, acidic glycans and neutral glycans require different measurement modes.
On the other hand, fluorescently labeling reactions by reductive amination allow the introduction of fluorophore to reducing ends of glycans. As the structure of reducing terminals is common to all glycans, therefore peak intensities in fluorimetric detection separation reflect molar distributions of glycans, and yielding quantitative profiles. These features are extremely valuable advantages for characterizing glycan quantities and variations in them.

Laser-induced fluorescence-capillary electrophoresis (LIF-CE) enables high-sensitivity, high-throughput quantitative glycan profiling. The advantage of capillary electrophoresis is known for its high separating power, and good separation is achievable even with neutral buffer systems; in our opinion, the real strengths of the method are the ability to combine it with online enzyme reactions, and the ease of interpreting results arising from the separation of samples by molecular size-to-charge ratio. For example, in the partial-filling method (Figure 5), one first injects a solution of enzymes at the capillary inlet (up to 1/10 the full length), then injects a glycan sample; component glycans are thus electrophoresed to pass through an enzyme layer, yielding separation patterns for reaction products. Thus far, we have used lectin (*3) and exoglycosidase (*4) for this research, allowing us to identify glycan structures from separation patterns for each lectin. In addition, the use of exoglycosidase ensures that glycans are digested from the non-reducing terminals, allowing separation and detection of the digestion products. The separation patterns thus obtained may be compared to standard glycan separation patterns, allowing highly accurate identification of the glycans that are present. Glycan content distributions are problematic for glycan analysis, but large-scale methods for increasing concentration may be applied to address this issue. Indeed, we have successfully increased sensitivity for a single sample by about 1,000 times simply by varying the injection program. The use of this method allows observation of tiny amounts of specific glycans—at the 0.1% level—via capillary electrophoresis. As noted above, capillary electrophoresis is an excellent technique for glycan profiling. However, no commercially available system allows temperature control of the capillary injection port. Consequently, the procedure requires greater than expected amount of enzymes, and demands further tricks such as reducing the voltage to increase the contact time while glycans are passing through enzyme layers. The development of instruments suitable for the partialfilling method would broaden the range of applications for capillary electrophoresis, enabling a variety of uses beyond the analysis of glycans. We are hopeful that instrument makers will soon venture into this promising area.

(*1)
Known examples include exoglycosidases such as galactosidase and mannosidase, glycan-linked amino-acid amidases such as peptide N-glycanase, and endoglycanases that leave behind reducing terminal residues after hydrolyzing glycans. All O-linked glycan-releasing enzymes are highly specific to glycan structures and cannot be used as glycan-releasing enzymes.
(*2)
Chemical release reactions for glycans include hydrazine and ammonia treatment. Each has advantages, but at present no method can be said to be perfect.
(*3)
Lectin is a general term for proteins with the property of binding specifically to glycans. Some of these recognize only reducing terminal residues, while others recognize glycan branching structures; at present some 40 species are commercially available.
(*4)
All exoglycosidases needed for glycan analysis—including α-N-acetylneuraminidase, α-fucosidase, α-/β-galactosidase, α-/β-mannosidase, and β-N-acetylhexosaminidase—are available for purchase.