As a scientist studying applications of synthetic filaments in separation science, our research has led us to develop— and explore applications of—two specific technologies: (1) a filament-packed separation column, consisting of a cylindrical column loaded with a large number of synthetic filaments (with the filaments oriented parallel to the column axis), and (2) a capillary for preprocessing samples1-3). The internal structure of the filament-packed separation column differs from that of the separation columns commonly used for liquid chromatography (LC) and gas chromatography (GC), and in previous work we have presented case studies of separation problems in which the unique capabilities of synthetic filaments—their ability to resist dissolving in solvents, their good chemical resistance, and their high heat tolerance—were put to good use. The sample preparation capillary offers the convenient advantage of online coupling with micro-column LC systems and has been successfully used to miniaturize the entire LC process, from sample preprocessing to separation. In this article, I discuss applications of synthetic filaments (Figure 1) to the development of separation and extraction media, and then present a partial survey of innovative research made possible by this novel technique. 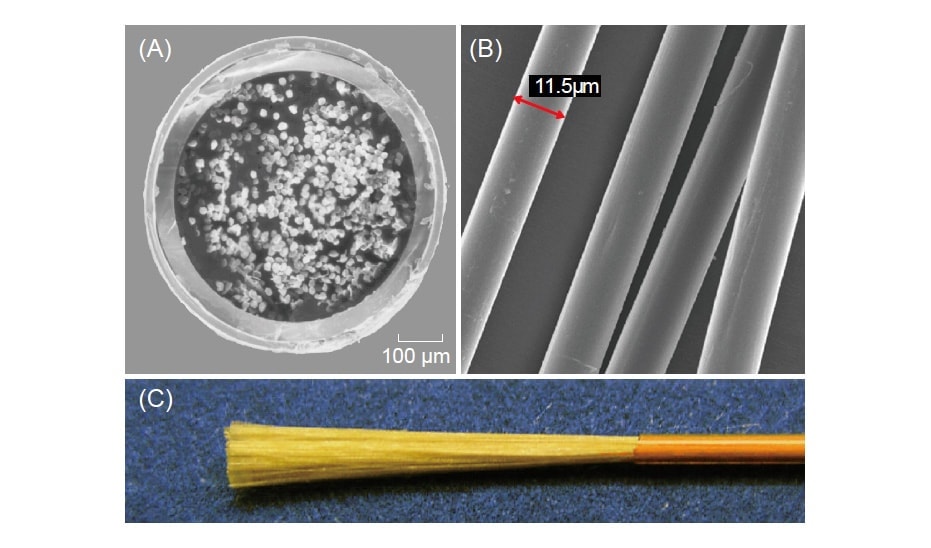 Fig. 2 Filament-packed capillary column for gas chromatography4,5). (A): Cross-sectional SEM image. (B): Higher-magnification SEM image of filaments. (C): Capillary column: A fused-silica capillary with a length of 1 m and an inner diameter of 0.53 mm packed with approximately 330 Zylon filaments.

The columns used for LC are typically packed with particulate packing materials. For GC, the most common choice is an open-tubular capillary column consisting of a fused-silica capillary with a stationary-phase liquid film formed on its inner walls; however, the alternative choice known as a packed column—a glass tube or similar tubing packed with particles of packing materials such as diatomaceous earth whose surfaces are coated with a stationary phase— has also been used for some purposes. In contrast, filament-packed capillary columns are packed with bundles of 10-12 μm-diameter filaments, oriented with the length of the filaments parallel to the column axis; the key characteristic of these columns is that their internal structure (Figure 2) differs from that of the columns conventionally used for LC and GC4). In this section we introduce a micro-LC sample preparation device that exploits the outstanding insolubility and chemical resistance of synthetic filaments9,10). Like the filament-packed capillary column, the miniaturized sample preparation cartridge consists of a tube made of a substance such as PTFE or PEEK packed with a large number of filaments oriented with their lengths parallel to the tube axis. Only small pressures are required to induce fluid flow for liquids such as sample solutions or desorption solvents. Moreover, even at lengths of just 5 mm—the size of a grain of rice (Figure 4)—these cartridges have been shown to offer more than adequate extraction performance. We have also developed a system for online coupling of micro-scale sample preparation with micro-column LC. This system incorporates our ultraminiature sample preparation cartridges in the rotor parts of micro-column LC injectors11).

By intertwining filaments in braided configurations, it is possible to form filament bundles with hollow interiors, which may be used to enclose stainless-steel wires or other thin metal strands (Figure 5). These bundles simultaneously offer a large total surface area and low resistance to the flow of sample solutions in the direction of the bundle axis. As in the case of filament-packed capillary columns, coatings or other surface treatments may be applied to the filaments to achieve sample-specific extraction selectivity for various purposes. These cartridges have many advantages for use as micro-scale sample preparation devices, conceived primarily for the purpose of extracting trace quantities of organic compounds from aqueous samples12). Moreover, resistive heating of the enclosed metallic wire allows efficient desorption processes after sample extraction (Figure 6).

Braided filament bundles may also be used to enclose materials other than metal wires. For example, an enclosed bundle of carbon fibers could find applications as a novel extraction medium boasting hybrid extraction capabilities. Braided packed capillaries enclosing metal wires allow precision temperature adjustment via external electrical controls, possibly enabling applications to interfaces for GC-GC or other two-dimensional chromatography systems— specifically, as the devices known as modulators that control the motion of the analysis target analytes from the first dimension to the second dimension. Synthetic filaments—particularly extremely high-strength filaments—are made possible by sophisticated modern chemical technology. Although they have found many applications as structural materials, as yet their uses as functional materials have remained limited. Similarly, braiding—despite being a traditional Japanese technology—has thus far been used for only a handful of industrial applications, including reinforcement for high-pressure pipes. In the future we may look forward to new tiers of applications for these basic technologies in the field of separation science.