Hitachi Diffraction Gratings Analyze a Variety of Radiations Ranging from X-rays to Infrared.

Hitachi diffraction gratings are adopted in a wide range of scientific and industrial fields, e.g. large spectrograph for photobiological research and Spectrophotometers for extreme ultraviolet explorer.

*
These gratings are available in North America and Europe.

The diffraction gratings capable of analyzing a variety of radiations ranging from soft X-rays to far infrared are now expanding their application areas as optical elements indispensable for spectroscopy.
The diffraction gratings developed by Hitachi have been used in various application areas, and are now highly evaluated as the world's foremost optical elements.
For example, a total of 36 diffraction gratings having a size of 15 × 15 cm and arranged in a mosaic pattern, are adopted in the large spectrograph used in the Okazaki National Research Institutes, National Institute for Basic Biology.
The spectrograph has successfully realized the world's largest artificial rainbow whose intensity is 20 times the sunlight energy right above the equator.
Furthermore, the Hitachi plane diffraction gratings consisting of varied space grooves have also been adopted in the Spectrophotometers of the extreme ultraviolet explorer scheduled to be launched by NASA of the U.S.A. Hitachi has developed the reflection plane gratings and concave gratings to meet such most-advanced technological fields as exemplified above.
These gratings are available in a wide variety of models to meet your diversified needs. 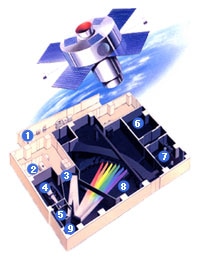 Large spectrograph at the Institute for Basic Biology 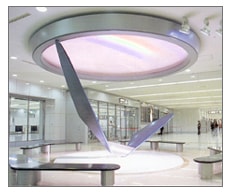 An art object representing a rainbow under the dome, which was created using the Hitachi diffraction grating parts.

*
These gratings are available in North America and Europe.

From X-rays to Infrared! Gratings can now be designed to meet specific requirements.