1. Principle and System Configuration of HPLC (1) 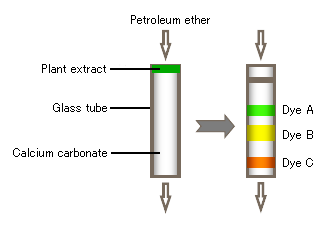 Chromatography is a technique by which a mixture sample is separated into components. Although originally intended to separate and recover (isolate and purify) the components of a sample, today, complete chromatography systems are often used to both separate and quantify sample components.
The term, "chromatography" was coined by the Russian botanist, Tswett, who demonstrated that, when a plant extract was carried by petroleum ether through a column consisting of a glass tube packed with calcium carbonate powder, a number of dyes were separated, as shown in Figure 1. He named this analysis method "Chromatographie" after "chroma" and "graphos", which are Greek words meaning "color" and "to draw," respectively.

Although the intended use of GC and LC are the same (i.e., separation and quantification), the measurement subjects are different, as the sample conditions differ at separation. The stationary phase typically indicates a column (fillers), while the mobile phase, which is referred to as the eluent in LC, indicates a vehicle to pour a sample into the column.

What does HPLC stand for?
HPLC is short for the High Performance LC. HPLC is an analysis method that yields high performance and high speed compared with traditional column chromatography because of the forcibly pumped mobile phase. Recently, ultrafast analysis using a high-pressure-resistant apparatus has been attracting attention. UHPLC (Ultra High Performance LC) is becoming established as an abbreviation for this ultrafast LC method. 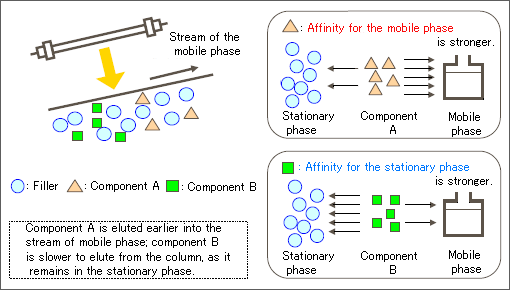 Chromatography is based on the principal that under the same conditions, the time between the injection of a component into the column and the elution of that component is constant. This characteristic is used to perform qualitative or quantitative analysis. Such analyses are explained here using the measurement of aspartame, a synthetic sweetener contained in beverages.