The probe exchange necessary for each measurement or sample can be performed via automatic detachment of the cantilever, lessening daily work load. In addition, by making the parameter settings performed during each measurement automatic, it is now possible, even for inexperienced operators, to easily perform measurement. This addresses difficulties with AFM operation and improves productivity.

By automatically exchanging the cantilever, it is possible to always have the appropriate probe available for use

Via automatic setting of parameters, it is possible to perform measurement under consistent conditions, regardless of the operator’s experience level.

The adjustment of the laser to the cantilever that has previously required a skilled operator is no longer necessary. By incorporating a self-detection system into the cantilever included in the sensor, there is no variation due to different operators, while laser control and adjustment are performed automatically. This enables simpler measurement and improves productivity.

Measurement with little error thanks to automatic laser adjustment

Through the use of an impact stage, it is possible to easily adjust measurement position by manipulating a cursor on a CCD monitor, even without use of an electric stage. This greatly improves operability and enables speedy measurement when performing measurement in multiple locations on the same sample.

High-accuracy measurements of slanted surfaces with a steep slope

When measuring slanted surfaces with steep slopes in DFM mode, it is difficult to control scanning so that the tip is always the same distance from the sample and there is a tendency for separation to occur (parachuting). With SIS (Sampling Intelligent Scan) mode, the tip obtains data by approaching the sample only at points of measurement and otherwise moves in a horizontal direction above the sample, ensuring high-precision measurement, even when dealing with slanted surfaces with steep slopes.

Examples of observation of slanted surfaces with steep slopes

In DFM mode, samples that are soft or highly adsorbent may become deformed or damaged during measurement. With SIS (Sampling Intelligent Scan) mode, however, the probe is isolated vertically from the sample and moves in a horizontal direction, in order that lateral force does not cause the probe to push against the sample and to protect both probe and sample from damage, ensuring highly precise measurement.

High-resolution measurements in a vacuum

Capable of AFM measurement in vacuum environments. When measuring electromagnetic properties in a high-vacuum environment, this model eliminates the influence of absorbed water, atmospheric gas molecules and humidity on the surface, preventing oxidation of the sample surface and enabling high-resolution measurement that results in an understanding of physical properties that is closer to theoretical values.

When performing imaging via SPMs with vibrating cantilevers, the viscosity resistance generated by gas molecules impacts the sensitivity of force detection.
By employing Q control in vacuum environments, it is possible to perform imaging with a higher degree of sensitivity.

Stable and accurate measurements during sample heating and cooling “SÆMic.” is a one-piece solution that combines the topography, composition, and elemental analysis functions of SEMs with the ability of AFMs to conduct 3D measurement and analyze/evaluate mechanical (hardness, adsorbent, abrasive), electromagnetic (electrical current, resistance, potential), and magnetic (magnetism) properties. Through the use of a linkage holder, it also enables easy analysis/evaluation of identical points with a SEM and AFM. This model provides a solution for the curvature (crosstalk) that commonly occurs with telescopic vertical movement of the scanner, a tendency which has previously been a problem with AFM. By developing a new scanner that eliminates the impact of crosstalk when moving in a vertical direction, it is now possible to perform measurements with a left-right bending error of 0.5 degrees or less. This enables topography measurement of broad three-dimensional structures. Measurements of work functions in ambient or vacuum environments

Capable of isolating and generating an image of the magnetic forces that affect magnetic tips and samples as variations in cantilever vibration. Since it can be used for measurement in a vacuum environment, there is little of the viscosity resistance generated by gas molecules and liquids that might occur in open-air environments or solutions. By setting appropriate Q options automatically, it also enables highly sensitive, high-resolution magnetic imaging. Observation of the magnetic recording states of hard disks via MFM
(atmosphere, vacuum)

While AFM analysis of semiconductor dopant distribution has been performed with SSRMs (Scanning Spreading Resistance Microscopes) and SCMs (Scanning Capacitance Microscopes) in the past, use of SNDM (Scanning Nonlinear Dielectric Microscopes) technology in vacuum environments enables low-density observation and highly precise measurement of CV property curves. 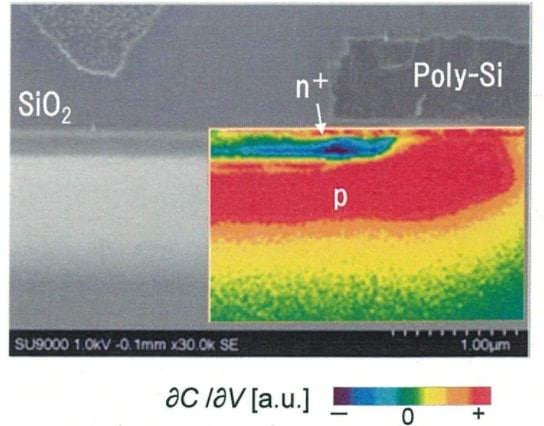 By employing an environmental control unit, this model can perform quantitative measurement of the elastic modulus in heated and chilled environments, or those where temperature/gas is controlled. In addition to the previously mentioned open-air, high-vacuum, heated and chilled environments, the environmentally controlled atomic force microscope AFM5300E also includes options applicable to measurement during inert gas replacement, humidity control and liquid submersion. The figure illustrates the capabilities of these environmental control options by showing the results of AFM observation of electrolyte membrane fuel cells in low-humidity (10%), high-humidity (80%), and pure water environments. When humidity is high, you can see how the electrolyte membranes absorb water and swell to a larger size. In pure water, this swelling is even more pronounced, and we see a shift to rough surfaces.

Observations of structural changes in a vacuum

In some polymer materials, volatile components such as low molecular weight components and residual solvents are sublimated or vaporized from the surface, leading to changes in material surface structure or composition. The figure shows structural changes observed with AFM in film-shaped polymer materials before and after approx. 30 minutes of evacuation. After evacuation, we see the emergence of surface roughness with undulations multiple nm in height. 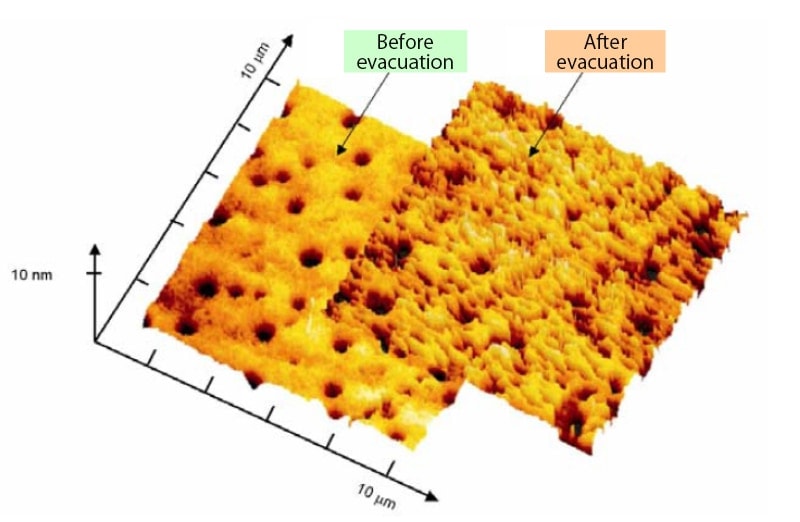 Enabled true observations of topography and other physical properties

Comparison of traditional AFM and SIS-ACCESS

·SIS-ACCESS: Lateral movement and vertical movement take place in an area completely isolated from (above) the sample, preventing the probe from pushing into the sample due to lateral force. In the image on the right, observation reveals that deformation of the soft domain portion is suppressed and it is preserved in a state close to its original topography.

This product is an optional product compatible with the company’s AFM5000II controller.
SIS is the name for the “Sampling Intelligent Scan” function developed by Hitachi. With SIS, the probe tip only makes contact with the sample at the time of data acquisition, and at other times it avoids the sample by moving on a plane above it in a horizontal direction at a higher speed compared to traditional methods. When it seems poised to make contact with the sample, scan speed is automatically reduced and the probe rises to avoid the sample surface.
Footnote 1: Obtains images that are closer to true topography than those taken with traditional methods.

SIS-QuantiMech transforms the load of each focus curve into an indentation volume curve and enables calculation of Young’s modulus by approximating each contact model. In addition, the newly developed SIS-ACCESS function and standard-equipped navigation function make several tasks intuitive and enable capture of topographic images and quantitative mechanical property evaluation to be performed simultaneously. 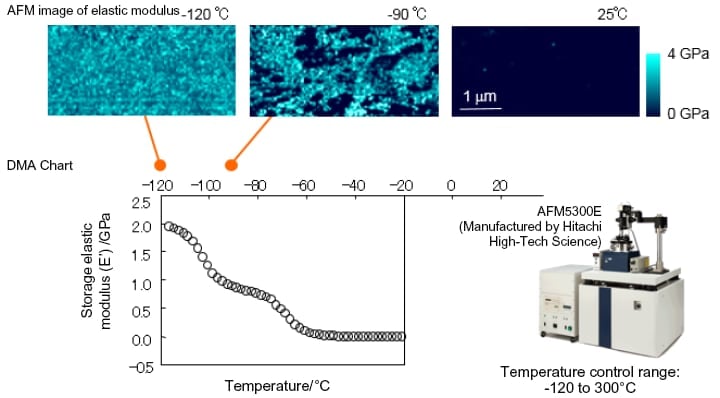 DMA and AFM measurement of the elastic modulus of gel This product is an optional model compatible with Hitachi’s AFM5000II controller. Use of the product requires separate SIS-ACCESS.
SIS is the name for the “Sampling Intelligent Scan” function developed by Hitachi. With SIS, the probe tip only makes contact with the sample at the time of data acquisition, and at other times it avoids the sample by moving on a plane above it in a horizontal direction at a higher speed compared to traditional methods. When it seems poised to make contact with the sample, scan speed is automatically reduced and the probe rises to avoid the sample surface.

Hitachi AFM will prove useful at any stage

This section offers information aimed at customers who use our scanning probe microscopes.

Regarding products no longer in production