Exceptional technical skill is essential to the manufacturing of cutting-edge products. Hitachi High-Technologies encourages the attainment and handing down of high-level technical skills through programs such as technical training courses and on-the-job training.

These efforts bore fruit in November 2006 when Toru Katouno of the Naka Division received the Contemporary Master Craftsman Award (metalworking machine tool operator category) from the Ministry of Health, Labor and Welfare. Employees of Hitachi High-Technologies have also regularly been medalists at the WorldSkills Competition, an event that provides an opportunity for young technicians to compete with their peers from around the world. At the 38th WorldSkills Competition held in Helsinki, Finland, in June 2005 Kazutoshi Onuki became the first entrant from the Naka Division to win a gold medal (in the mechanical engineering and CAD category) in 32 years. Mr. Katouno and Mr. Onuki were both also selected to receive the Monozukuri Nippon Grand Award from the Prime Minister of Japan.

Three entrants from Hitachi High-Technologies competed in the 39th WorldSkills Competition held in November 2007 in Shizuoka, Japan. All three made impressive showings, with Akira Fujimoto and Akitomo Ebine winning gold medals (in the CNC turning and CNC milling categories, respectively), and Komei Osuga winning bronze (in the mechanical engineering and CAD category). 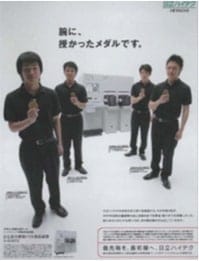 Corporate advertisement featuring WorldSkills Competition medalists. It was intended to highlight the high level of technological skill at Hitachi High-Technologies and the ways it is being put to use in cutting-edge products. (From left, Kazutoshi Onuki, Akira Fujimoto, the S-9380 II CD-measurement SEM, Akitomo Ebine, and Komei Osuga.) 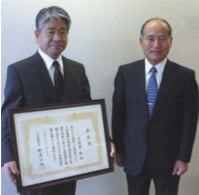 Kazutoshi Onuki being honored as the first entrant from the Naka Division to win a gold medal at the WorldSkills Competition in 32 years. (Mr. Onuki is in the center, holding the bouquet.)