Building a Sense of Shared Values

Since its establishment the Hitachi High-Technologies Group has steadily grown and prospered as an organization combining “manufacturing, sales, and services” through a thoroughgoing commitment to “putting the customer first” and “prioritizing the worksite.”

As fiscal 2008 approached, with the 10th anniversary of the company’s founding only three years away, the top management endeavored to formulate the ideals, values, and strategy shared in common by the group as a whole, with the aim of achieving further rapid progress. At the Executive Officers’ Brainstorming Session (BS8) held in June “what we want the company to be” and “shared values the company holds dear” were discussed alongside the Long-Term Management Strategy.

The period from the establishment of the company until that point was seen as the “fusion phase,” during which the companies, organizations, and personnel that make up the Hitachi High-Technologies Group moved forward business operations with a sense of unity. The next 10 years would be the “expansion phase,” during which Hitachi High-Technologies would grow and extend the value of the group as a whole as a vigorous and ambitious company creating new businesses and a brilliant team. In order to make this a reality it was necessary to clarify a common understanding of “what we want the company to be” and “the values the company holds dear.”

The Hitachi High-Tech SPIRIT Project to formulate the values the company holds dear was launched in fiscal 2009. Its basic guideline was to encourage those who would be moving the company forward over the next decade to think and set targets for themselves. A team of 65 managers in the prime of their careers and selected from various departments within the company, group companies, and overseas subsidiaries held repeated meetings over a period of about six months, including one overnight session. Their efforts provided an eloquent endorsement of the “shared values” the company holds dear and of the need for venues to discuss culture and values, unconstrained by boundaries of organization and hierarchy. 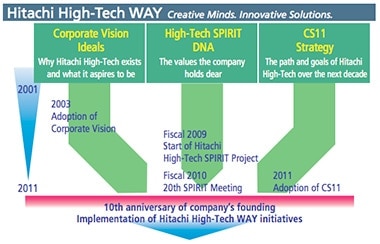 History of formation and adoption of Hitachi High-Tech WAY