When Hitachi High-Technologies was founded in October 2001 full management efforts toward CSR were called for as part of the management policy, and emphasis was also placed on the dissemination of information to society. An Environmental Management Department was launched at the same time, tasked with the implementation of environmental management initiatives and with the compilation of the annual Environmental Report.

In April 2005 the CSR & Environmental Promotion Department was newly established and given overall authority over CSR. In April 2006 this department evolved into the CSR Promotion Division, headed by a Senior Vice President and Executive Officer. Then, in April 2011, the CSR Division was newly established, refl ecting the central role of CSR in the management operations of the company. At the same time the Legal & CSR Department, Corporate Communications Department, and Environmental Management Department were put in place to promote CSR.

Since 2015 CSR and management have been ever more closely integrated through efforts at boosting the quality of implementation by establishing guidelines at the global group level and evaluating their level of attainment, based on the ISO 26000 international CSR standard.

In particular, the Hitachi High-Technologies Group is expanding efforts in areas such as compliance and environmental risk reduction from a global perspective as a company with worldwide business activities. In addition, the company is actively endeavoring to implement diversity management, promoting respect for disparate sensibilities and values as a way toward a more vigorous organization.

In the area of information dissemination, Hitachi High-Technologies issues an Environmental Report on a regular basis, and since 2005 this has been joined by an a CSR Report. In 2015 an Integrated Annual Report was issued combining CSR information and financial information to provide a fuller account of corporate activities. Such efforts at information dissemination are intended to deepen the understanding of stakeholders in Hitachi High-Technologies and also to enable the incorporation of the views of stakeholders in future CSR initiatives. 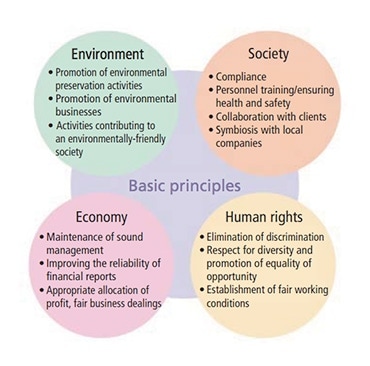