Etching Machines that Contributed to the “Hinomaru” Semiconductor Era

The Kasado Works of Hitachi, Ltd., recognizing that its mature chemical equipment products would reach their peak in the 1970s, decided to utilize ultra-high-precision technology from their work on measuring instruments to develop semiconductor manufacturing equipment, assisted by the Central Research Laboratory.

Technical development work on reactive sputter etching and microwave plasma etching began in 1976, and in 1982 the RE-504A dry etching machine was released.

The RE-504A was put into service on the mass production lines of Hitachi, Ltd., which lead the industry with the development of 64K DRAM chips in 1980. It played an important role in achieving even more ultrafine VLSI devices. Hitachi, Ltd. suddenly captured the top share of the world market for 64K DRAM, and this led the way to Japan’s eventual dominance of the global semiconductor industry.

Later, the RE-655A reactive sputter etching machine was completed and made its debut at the Musashi Works, where it contributed to the successful mass production of microcontrollers, logic chips, and other VLSI devices. 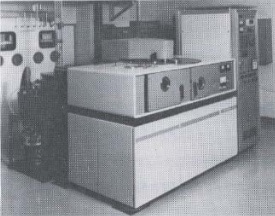