Hitachi High-Tech Fine Systems Corp grew out of Hitachi Electronics Engineering Co., Ltd., which was established in 1965. Hitachi Electronics Engineering supported the development and design of manufacturing equipment for the production facilities of Hitachi, Ltd. in Totsuka, Odawara, Musashi, Takasaki, and other locations. In the 1970s they expanded their focus to include manufacturing and inspection equipment for hard disks and semiconductor devices, and they began direct sales of such products in the 1980s. Since then they have branched out into manufacturing and inspection equipment for LCD panels as well.

Board Director Haruyoshi Kato, Head of the Industrial Infrastructure Div., describes those times as follows: “In 2001 capital investment related to semiconductor devices and hard disks was down sharply due to a slump in the IT market, and the LCD market had not yet taken off. Hitachi Electronics Engineering found itself in a tough situation. In spite of this, we continued to develop manufacturing and inspection equipment to support hard disks using the new perpendicular magnetic recording method as well as manufacturing and inspection equipment for large-format LCD panels.”

In April 2004 the company joined the Hitachi High-Tech Group and its name was changed to Hitachi High-Tech Electronics Engineering Co., Ltd. It was during this period that the products developed during the tough times came into full flower.

LCDs became the dominant type of fl at panel display, and anticipated growth in the sales of LCD televisions led to a sudden increase in orders for manufacturing and inspection equipment for LCD panels. Demand for hard disk manufacturing and inspection equipment also grew rapidly, as factors such as the appearance in 2003 of Hitachi Global Storage Technologies and the emergence of the information appliances market led to a fl ood of large orders, many from manufacturers overseas. In fiscal 2006 sales of LCD and hard disk related equipment approached \80 billion, and this growth contributed in a significant way to the profitability of the Hitachi High-Tech Group overall.

Looking back, Eiichi Okamoto of the Industrial Infrastructure Div., who lead sales efforts at the time, characterized the situation in this way: “In the hard disk field our RQ Series media inspection machines and our NS Series optical inspection machines for glass and aluminum panels sold well, and in the LCD field our equipment for washing and developing color filters, lithography machines, and module assembly machines capable of accommodating large-format panels, which were increasing in size every year, were very successful, eventually capturing over 60% of market share in the industry.”

Subsequently, the company endeavored to deal with intensifying competition on a global scale, to strengthen the foundations of its business, and to expand its business into new fields. Today Hitachi High-Tech Fine Systems is making the most of the technology built up over the years to launch new businesses, expanding its railway inspection business and extending its business overseas in the social infrastructure field, and expanding its automation equipment business and branching out into industrial inkjet printers in the industrial infrastructure field. 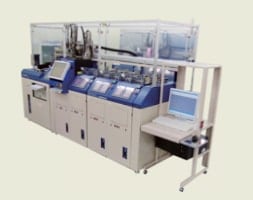