In June Tadamichi Sakiyama, who had an established track record in finance at Hitachi, Ltd., was appointed Outside Board Director and Chairman. In his message upon assuming the post, Chairman Sakiyama said that he anticipated that “business expansion will be achieved if we can boost corporate value by exhibiting the strengths of Hitachi High-Tech’s business model of combining manufacturing, sales, and services to provide value to customers globally, increase our sensitivity to changes in the world around us, and undertake careful planning.”

Also in June President Hidehito Obayashi held an “Executive Officers’Brainstorming Session” (BS8) at which all the executive officers met to discuss how to maximize the corporate value of Hitachi High-Technologies Group. The no-holds-barred discussion at BS8 covered ways to strengthen the company’s corporate foundations while noting the drastic changes in the business climate, and it examined topics such as assuring robust future growth, speeding up development, invigorating trading operations, and strengthening the business globally. Subsequently, such brainstorming sessions were held every two years, and they became established as venues for discussing medium-term management issues and firming up strategies.

In the midst of these positive initiatives, the collapse of Lehman Brothers occurred in September 2008. The fall of this major American investment bank triggered a global financial crisis and a worldwide business slump that continued to expand in scope. Uncertainty about the implications for the U.S. economy as a whole caused the yen to rise as the dollar weakened. This strangled investment worldwide, including in the automotive and semiconductor sectors. In Japan more and more companies put into place temporary freezes on investment, and the business prospects of Hitachi High-Technologies took a sudden turn for the worse.

President Obayashi decided that in order to overcome the first serious crisis faced by Hitachi High-Technologies since its integration, the entire company must act as one. In a message titled “To All Employees” he laid out the facts regarding the difficult business climate in the latter half of fiscal 2008 and the forecast for the company’s consolidated financial results for fiscal 2008. He identified as urgent priorities active implementation of business restructuring, reduction of costs overall, speeding up of development, deepening of consolidated management, stronger cash fl ow management, adhering to “the basics and the ethics,” preventing unnecessary losses, and systematic training of personnel.

Nevertheless, due to the effects of the slow recovery of the semiconductor manufacturing equipment and LCD-related manufacturing equipment markets, the consolidated financial results for fiscal 2008 showed a reduction in sales of 17.8% year-on-year to \775 billion, a 69.7% drop in operating profit to \14.9 billion, and a 73.7% reduction in current net profit to \7.1 billion. This was Hitachi High-Technologies’ first year-on-year drop in earnings and profits since its establishment. Tadamichi Sakiyama
Outside Board Director and Chairman 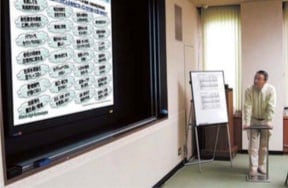 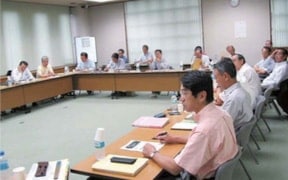 Scenes from the brainstorming session held on June 28 and 29, 2008, where discussions were held on topics such as “speeding up development,” “invigorating trading operations,” and “strengthening the business globally”