As expected, the global economic slump continued through fiscal 2009, and the situation was worsened by the further rise in the yen exchange rate and spiraling crude oil prices.

Aiming for an early turnaround in business performance, Hitachi High-Technologies continued to reexamine its cost structure. Initiatives to cultivate new business opportunities in order to accelerate the growth strategy included the launch of NEXT Yuho Kakumei, an online service for trading in marketable securities; an organizational reform solutions business utilizing Business Microscope, a system for visualizing organizational activities; and High-Tech Vision, a video conferencing system business. Considerable emphasis was placed on these efforts to quickly boost revenue.

In October it was announced that Hitachi High-Technologies would be taking over the bonder business of Renesas Eastern Japan Semiconductor, Inc., with the spring of 2010 as the target timeframe. Also in October the Tokyo Technical Center opened as a facility for training customers in the use of medical analysis equipment. The center was outfitted with advanced machines and equipment, allowing training to take place comfortably and efficiently. Customers had a very favorable opinion of the facility, as it enabled their employees to understand the operation of the products and to thoroughly familiarize themselves with all aspects of them.

In other initiatives aimed at generating new growth, Hitachi High-Technologies teamed up with Britain’s Centre for Process Innovation Ltd. and Hitachi, Ltd. to enter the direct methanol fuel cell business; a strategic partnership agreement was reached with XeroCoat, Inc. of the United States for the sale of anti-reflective coating equipment and materials for solar modules; and collaboration continued with Hitachi, Ltd., Hitachi Transport System, Ltd., and others on overseas procurement solutions.

In the second half of 2009 there were signs of improvement in the world economy, and there was hope of a gradual recovery of the economic climate in Japan.

Nevertheless, hopes for a full-scale market recovery in semiconductor and LCD-related equipment did not pan out, and the consolidated financial results for fiscal 2009 showed a reduction in sales of 20% year-on-year to \616.9 billion, an operating loss of \1.6 billion, and a current net loss of \2.8 billion. This was Hitachi High-Technologies’ first financial deficit since its establishment.

Even in this dire situation there were some bright spots. In April 2009 Hitachi High-Technologies was honored at the 2009 Excellence in Intellectual Property Awards with the “Commendation from the Minister of Economy, Trade and Industry (Outstanding Patent Strategy Company Award).”

This award recognized that Hitachi High-Technologies considers intellectual property to be a precious corporate asset and that it works actively to utilize it and increase its value. 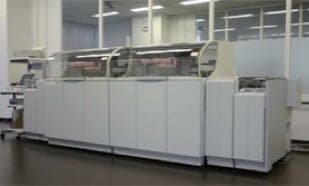 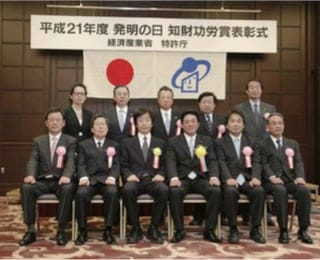