Hitachi SEMs contribute to research and development in the fields of medicine, biotechnology, and advanced nanotechnology materials. The company's line-up of easy to use SEMs provides these industries with ability to image samples for topographical observations and analyses. The Hitachi SU8000 is now included in the Hitachi line-up of products along with the S-5500, [(Immersion Lens system which generates the highest resolution images in the world(*1)(0.4nm at 30kV))], and the S-4800,[(a semi-in-lens type of objective lens to achieve functionality and resolution, on a par with S-5500, but capable of accommodating larger samples (up to 200mm in diameter) )].

This top detector can detect high-angle backscattered electrons at low accelerating voltages. This imaging component includes channeling and compositional contrast of the sample's top surface. With Hitachi's beam deceleration technology and the use of the top detector, high-resolution observations can be performed at ultra-low landing voltages. The top detector captures secondary electron signals so the sample's shallow surface information, can be visualized at 100V. The Hitachi SU8000 also includes an upper detector, which provides highly efficient SE signal detection employing Hitachi's proprietary and popular ExB filter technology. This capability provides high-resolution surface structure imaging, while controlling charging. Charge control is provided through a function that enables users to vary the ratio of secondary and backscattered electron signal collection.

The SU8000 features a 24.1-inch widescreen monitor. Compared with the previous 19-inch monitor, the SU8000 monitor improves operability by providing a 1.8-fold increase in pixels and displays the SEM image on a large screen not obscured by the control panel or captured image.

Hitachi High-Technologies plans to exhibit the SU8000 at the Microscopy and Microanalysis 2008 to be held in Albuquerque, New Mexico USA from August 3, 2008. The company also plans to introduce the product at the JAIMA Show 2008 (Japan's Exposition of Analytical Instruments and Solutions) to be held at the Makuhari Messe International Convention Complex from September 3, 2008.
Hitachi High-Technologies will begin to ship the product in September 2008 and expects to achieve sales of 200 units per year. 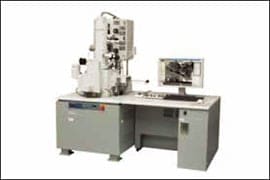