Hitachi High-Technologies Corporation (TOKYO:8036, Hitachi High-Tech) today announced the development of the Ratio Beam Spectrophotometer U-5100, a user-friendly system that offers a small footprint, energy savings, and excellent design qualities. Sales of the U-5100 to universities, research institutions and other customers around the world are started in April, 2010.

A spectrophotometer is a device for measuring the density of substances in a test sample by directing a beam of white light split into individual colors using a prism or diffraction grating at a sample and detecting the wavelengths of light that pass through. With a wide range of applications in academic and industrial fields such as materials science, environment, pharmaceuticals, and biotechnology, spectrophotometers have already proven useful in research and development. The global market is currently estimated at US$700 million. Amid increasingly widespread use, there is a growing demand for models that use less power and are more economical in terms of consumables and other running costs. This has become a major factor for customers selecting a machine, along with environmental considerations.

Hitachi High-Tech newly developed Ratio Beam Spectrophotometer U-5100 represents the successor to the U-1900 model released four years ago. Upgraded under the concept of ECO FRIENDLY & CLEAN, the new product also offers improved functionality. Thanks to the adoption of a long-life, energy-saving lamp, the U-5100 consumes 70% less energy than the previous model, resulting in significantly lower running costs. With an approximately 40% smaller footprint and 50% lighter body weight, the unit is compact and lightweight, and features improved operability so that even novice users can feel comfortable using it. In particular, the U-5100 is the first spectrophotometer that allows users to choose between Japanese and English instructions on the display via a simple button interface without requiring a firmware exchange. With automated 6-cell holder measurement enabling high throughput, this truly groundbreaking analyzer system achieves new levels of both environmental performance and basic functionality. In addition to these major performance enhancements, Hitachi High-Tech has reviewed the exterior design to make the device more appealing. The result is a new device that overturns the conventional image of scientific analysis equipment.

Hitachi High-Tech will launch sales of the U-5100 in Japan and other parts of Asia, Europe, and North America in April, 2010 for use in a wide variety of applications, from university settings to manufacturing plants, pharmaceuticals, and environmental and biological analysis. The Company will work to promote sales around the world, aiming for a 20% global share on a volume basis in fiscal 2012.

Features of the Hitachi Ratio Beam Spectrophotometer U-5100

*
Ratio beam:
Ratio beam is an optical system that enables constant monitoring of changes in the light source using a half-mirror.
It provides a more stable baseline than single-beam optics. 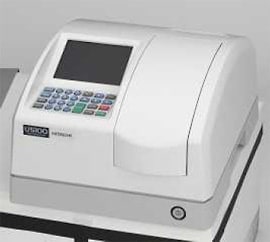