Dr. Hidehito Obayashi, President and Chief Executive Officer, Hitachi High-Technologies Corporation, is being honored by the IEEE*1 with the 2010 IEEE Ernst Weber Engineering Leadership Recognition. The award was established in 1985, and later renamed in 1996 to honor Ernst Weber, first President of the IEEE. The award is presented to the person who has demonstrated exceptional managerial leadership in the field of electrical engineering. Dr. Obayashi is the first Japanese recipient of the award.

The award will be presented on June 26, 2010 at the IEEE Honors Ceremony in Montreal, Quebec, Canada. 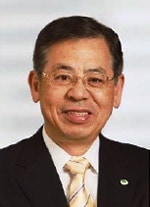 It is a great honor and pleasure for me to receive the IEEE Ernst Weber Engineering Leadership Recognition. I am indebted to customers around the world for their support and use of the CD-Measurement SEM over the years, and to the efforts of the Hitachi High-Tech staff in charge of development, sales, and after service who continuously try to satisfy the needs of those customers. It is your effort and support that has made this award possible.