Hitachi High-Technologies Corporation (TOKYO: 8036, Hitachi High-Tech) has completed construction of and started operations at the Design Building in the Naka Division (Hitachinaka City, Ibaraki Prefecture). Construction on this building began in September 2010.
The construction of the new building, which was prompted by the need for seismic-proofing measures, achieves centralization of design functions and "eco-factory" goals. With this step, Hitachi High-Tech will work harder to enhance speedy manufacturing activities that anticipate changing market conditions.

At the Naka Division, Hitachi High-Tech primarily develops, designs and manufactures semiconductor measurement and inspection equipment, electron microscopes, general-use analysis equipment and medical analysis equipment. The recently completed design building has a 7-story steel frame structure, with total floor space of approximately 25,000 square meters. It was constructed as part of a general redevelopment plan for refurbishment, rebuilding and other work on aging facilities implemented since 2007. Design and development divisions and administrative divisions will conduct operations in the new building.

The newly constructed building will facilitate closer cooperation among engineer and technological integration as it will centralize the design and development divisions at a single location. One longstanding issue at the Naka Division was that these divisions were spread out widely at different locations within the area. The building boasts features and facilities conducive to generating new ideas, such as an innovative floor plan and an auditorium for disseminating innovation. This will help to achieve the pooling of knowledge by stimulating closer communication among engineers. With this facility, Hitachi High-Tech will work to promote the development of next-generation products and boost the efficiency of equipment design. Hitachi High-Tech has also taken eco-friendly initiatives, such as introducing energy-efficient equipment along with installing rooftop greenery and solar panels.

The construction of the design building follows up on the completion of the manufacturing building (machine processing and medical analysis equipment assembly) in May 2009, for which construction began in March 2008 as part of the Naka Division General Development Plan. Dismantlement work on certain existing buildings that were damaged as a result of the Great East Japan Earthquake in March 2011 is currently under way. In fiscal 2012, the Company plans to construct three building in the Naka Division.

In 2011, Hitachi High-Tech marks the 10th anniversary of its foundation. 2011 also marks the 50th anniversary of the Naka Division. With the completion of the new design building, the Company intends to continue challenging manufacturing initiatives for its next 10 years in business. 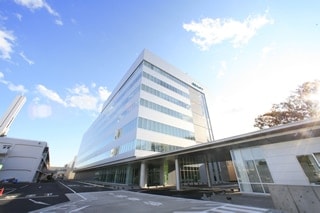