Scanning electron microscopes (or SEMs) are tools that enable observation of the surface structure of matter at the microscopic level. As such, SEMs have recognized utility and are utilized in various ways. Some of the most prominent applications for these tools today range from research and development work across a broad spectrum of industry, particularly nanotechnology and biotechnology-related fields, to quality control. Hitachi's low-vacuum SEM series has proven especially popular and has a strong reputation among customers worldwide. The low-vacuum observation method (6 to 270 Pa) that this series employs allows for the observation of non-conductive specimens for mounting electronic devices, and water-containing specimens, such as cultured cell lines that are garnering attention in regenerative medicine, without the need for specimen preparation .

The SU3500 was also developed with "live stereoscopic" function*1. This function evolved from the incorporation of technology originally developed as part of the Japan Science and Technology Agency's Technology for Advanced Measurement and Analysis Program as part of its promotion of research results. Development was led by Hitachi High-Tech, in conjunction with Eizo Nanao Corporation, Niigata University, and Shizuoka University. When used, this function moves at fast scanning speeds to build a three-dimensional SEM image for real-time image observation, eliminating the need to tilt the specimen for analysis. What's more, low-vacuum functionality is now standard on the SU3500, allowing observation of insulation specimens with no need for specimen preparation, enabling the tool to support development and analysis in an even broader range of fields. An Ultra Variable-pressure Detector (UVD) has also been developed as a new optional feature for the SU3500 that makes observations possible across low to high acceleration voltages, and under specimen chamber pressures ranging from several to several hundred Pa.

Hitachi High-Tech will exhibit the SU3500 panel as a part of the commercial exhibition in the 68th annual meeting of the Japanese Society of Microscopy held at the Tsukuba International Congress Center from Monday, May 14 to Wednesday, May 16, 2012.

*1
This optional function will be available soon. 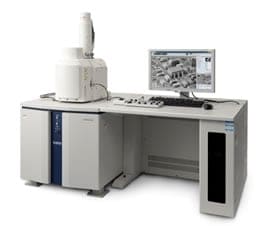