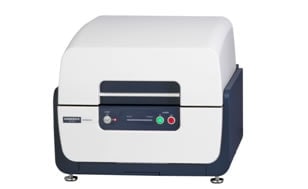 Hitachi High-Tech Science Corporation announces the development and worldwide release of the EA1000VX on September 10th, 2013. The improved X-ray analyzer enables fast and simple screening of hazardous substances (regulated by European Union directives such as ELV, WEEE, and RoHS) in automobiles and electrical/electronic devices.

Shorter inspection time and better operability have been demanded for X-ray analyzers due to EU directives such as ELV, WEEE, and RoHS which require large number of samples to be inspected. Leading industrial countries such as Japan, the US, China, and South Korea are committed to compliance with the RoHS directive (2002/95/EC) taken effect in July 2006. The revised RoHS directive (2011/65/EU) came into force in July 2011, and applied to medical devices and electronic and electrical tools in July 2014. This revision will even accelerate the need for improved X-ray analyzers.

The EA1000VX will be exhibited at Japan Analytical and Scientific Instruments Show 2013 (JASIS 2013) held at Makuhari Messe from September 4th to 6th.

Measurement time using the EA1000VX is one tenth compared to the conventional model SEA1000AII. (mean time when measuring plastics and brasses)

The instrument automatically determines sample materials and measures the sample.

Data measured using one or more than one instrument can be controlled by single software. This software enables users to compare and manage a trend of sample data, and provides a table of results.

*
This is an example of a test result under Hitachi High-Tech Science's measurement condition.