Development of Prototype for a Portable Brain Activity Measurement Device

The prototype developed by Hitachi High-Tech marks the latest achievement in its applied brain science business. The prototype consists of a headset that performs measurements from two points on the forehead using near infrared light, and a smartphone (Android OS) application that displays the measurement results. By concentrating the main measurement signal processing circuitry in the headset, which weighs approximately 100 grams, Hitachi High-Tech has improved the portability of the device, making it more wearable than ever. Furthermore, the measured signals are displayed in real time on a smartphone application, enabling visualization of brain activity anywhere, anytime.

In recent years, progress has been made on the development of technologies designed to easily measure pulse, eye movements and other physiological parameters using smartphones and other wearable devices. Meanwhile, the fields that are measuring brain activity and using the findings are expanding beyond brain science to cognitive science, psychology, education and other fields. In this manner, there has been an increasing demand for measuring brain activities in environments that are closer to people's daily lives.
Looking at the Hitachi Group, Hitachi, Ltd. (TOKYO: 6501, Hitachi) developed the world's first Optimal Topography technology for measuring brain function using near infrared light in 1995. Thereafter, Hitachi strove to develop products that could measure brain activity in familiar daily life settings. Hitachi has so far developed a compact-sized measurement system, which was launched in November 2009. In April 2010, Hitachi developed a wearable optical topography series of compact and portable devices that can measure the brain activity of up to 4 people simultaneously. In September 2011, Hitachi developed a prototype of an ultra-compact size and light-weight near-infrared measurement device. This project was part of Japan Science and Technology Agency's "Development of Systems and Technology for Advanced Measurement and Analysis" program and was undertaken together with Professor Ryuta Kawashima, Director of the Institute of Development, Aging and Cancer of Tohoku University. In these and other ways, Hitachi has been pushing ahead with the development of technology in this area.

The prototype developed by Hitachi High-Tech enables brain activity measurements to be made in even more familiar daily life settings. Hitachi High-Tech is striving to apply this new technology it has developed in a wide range of fields, such as cognitive training and learning. For this, Hitachi High-Tech will advance various verification studies in cooperation with universities and research institutes, with the aim of developing the prototype into a product by 2016. 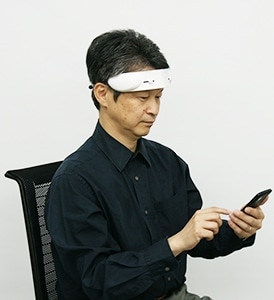