45% of worldwide semiconductor device shipments are produced by less than 8 inch wafer Fabs*3 and these devices are widely used for consumer electronics such as smart phones, tablets, appliances, automobiles, train systems and other social infrastructure systems. In addition, they are expected to grow in order to support the IoT (Internet of Things) related applications such as wireless communication devices or MEMS sensors.

Hitachi High-Tech launched its first CD-SEM as a metrology tool for process control of semiconductor device manufacturing in 1984, and had installed over 2,300 units of CD-SEMs which is for 6 and 8 inch wafers by the early 2000's when the industry began the transition to 12 inch (300mm) wafers. Extending the lifetime of these 6 and 8 inch tools in terms of providing spare parts and continued service support has proven to be a tremendous challenge. In order to offer a solution and help our customers replace aging tools with brand new tools, Hitachi High-Tech has developed and will release a new CD-SEM, the CS4800, utilizing proven technologies developed for 12 inch tools.

The CS4800 provides high-quality SEM imaging, improved measurement precision, and fast, automated operation, designed to improve productivity and operating efficiency of existing manufacturing lines and increase customer's process control capability. In addition, the CS4800 can be configured to handle two different wafer sizes that can be switched by the customer using to a new wafer-transfer system. Hitachi High-Tech plans to expand support for various wafer materials such as Silicon Carbide (SiC) and Gallium Nitride (GaN) to meet diversified customer's needs for new semiconductor or electronic devices.

With the development of the CS4800, Hitachi High-Tech will provide a sustainable CD measurement solution to a wide range of 4, 6, and 8 inch wafer Fabs and will support new emerging technology devices for the IoT applications, wearable devices, and next generation power devices. 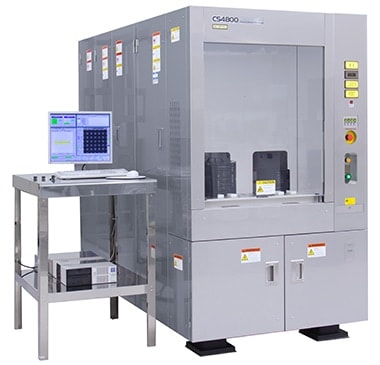 *4
GUI (Graphic User Interface): A software operating system interfacing a computer's graphic display with the use of a mouse and other pointing devices.