- Achieving brain activity measurement that is high sensitive and wearable -

In recent years, a move toward analyzing human brain function has taken off in Europe, America and Japan, and a need for obtaining bigger amounts of data in the daily life environment is increasing. In response to this situation, Hitachi High-Tech and HYS have been developing and launching systems utilizing optical topography technology (NIRS) *2 which are wearable and enable the measurement of brain activity in the daily life environment.

In this "WOT-HS" development, focusing on wearables without optical fibers and less signal cables, both companies developed a new compact capsule, into which microprocessors, near infrared emitting or receiving sensors, etc., are packaged. Especially, by adopting high-sensitivity receiving sensors, APDs (avalanche photodiodes), the "WOT-HS" realizes high-sensitivity measurement without sacrificing wearable functionality.
Through this development and placing the capsules on the scalp above the target location, in addition to the frontal lobe, the side part (temporal portion related to hearing) can be measured.

Furthermore, in addition to the standard optical topography measurement mode, the "WOT-HS" has a new multi-distance measurement mode, which is effective for reducing biological noise. Another newly added function is the surface LEDs on the capsule displaying the sensor fitting status, which will improve usability.

Hitachi High-Tech and HYS plan to develop a new product which can measure the top part of head (parietal portion related to motor skills and movement), in addition to the front and side part. Through the addition of the "Wearable Optical Topography System" series, both companies will supply measurement solutions in the daily life environment to contribute to the analysis of brain functions.

Hitachi High-Tech and HYS plan to develop a new product which can measure the top part of head (parietal portion related to motor skills and movement), in addition to the front and side part. Through the addition of the "Wearable Optical Topography System" series, both companies will supply measurement solutions in the daily life environment to contribute to the analysis of brain functions. 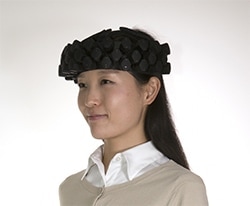 (1) Wearable design with compact capsule and no optical fibers

A newly developed compact capsule, containing a microprocessor, near infrared emitting or receiving sensor, etc., processed signals individually, so that the number of signal cables are reduced. With the benefit of employing capsule structure, the weight became 25% lighter than the conventional unit, even though the number of sensors increased to 35 from the original 16.

Furthermore, by minimizing the signal cable exposure of the headset with no optical fiber structure, wearable functionality has increased.

As shown in the Capsule Positioning figure below, by adding another receiver capsule to the middle of the sensor, the "WOT-HS" can offer a new multi-distance measurement mode. Conventionally, the experimental designs were considered carefully to suppress biological noise originating from skin blood flow. On the other hand, the multi-distance measurement technique improves the freedom of experimental design by reducing the biological noise on the hardware side. 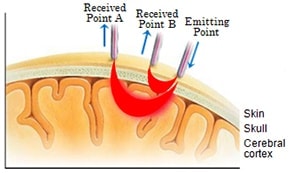 The "WOT-HS" offers a multi-distance measurement mode by positioning additional receivers, outlined by dotted lines in the above figure.

LEDs placed on the top of the capsule display whether the sensors are correctly fitted on the surface of the scalp, improving usability.

In addition to optical topography data, a motion sensor is built into the headset that simultaneously captures acceleration data, which will be usable at the data analysis stage.

*1
This product is for research purposes.
*2
Optical topography system: It is generally referred by NIRS (Near Infrared Spectroscopy) as well. Looking at the Hitachi Group, Hitachi, Ltd. (TOKYO: 6501, Hitachi) developed the world' s first optimal topography technology for measuring brain function using near infrared light in 1995. Thereafter, Hitachi strove to develop products that could measure brain activity in familiar daily life settings. Hitachi has so far developed a compact-sized measurement system, which was launched in November 2009. In April 2010, Hitachi developed a wearable optical topography series of compact, portable devices that can measure the brain activity of up to 4 people simultaneously. In November 2015, Hitachi High-Tech began sales of wearable optical topography system "HOT-1000," which enables customers to develop a training application using brain activity data via smartphones or tablets.