Our company has been sending representatives to the National Skills Competition since 1968 with the aim of passing on technical knowledge and cultivating young engineers, and we also have continued to accumulate awards from the WorldSkills Competition. The group's high-tech products are supported by our continuous development of cutting-edge technology and the highest standard of technical skills that make those products a reality. We believe competing in the competition leads us back to our manufacturing roots. We aim for world-class manufacturing by cultivating young engineers and passing on our technical skills.

The WorldSkills Competition was first held in Spain in 1950 with the goal of promoting work training and fostering international exchange and friendly relations between young technicians from the participating countries. The competition is currently held once every two years (in odd-numbered years). Participants must be 22 or under in the year of competition, and winners from the previous year's National Skills Competition can enter, excluding some events.

CNC milling is where a computer is used to control the horizontal and vertical movement of an object being machined and the position of a fixed-position rotating cutting tool, etc. CNC milling machines are machine tools used in mass production and for the manufacture of parts with complex shapes. In the competition, competitors demonstrate their understanding of diagrams and a knowledge of the characteristics of machinery and materials, program a machine based on the machining methods and procedures, and show the technical skills involved in machining a piece.

This skill involves using 3D CAD technology to create a model of a part based on industrial machinery assembly plans and actual parts, as well as creating 2D plans which include information necessary for the manufacturing process, such as machining methods and accurate dimensions. Competitors compete on their ability to correctly interpret plans to understand the part's shape, the ability to correctly measure physical items, skill in operating CAD, and a knowledge of plan standards, as well as the ability to express the plans in a way that viewers can easily understand. 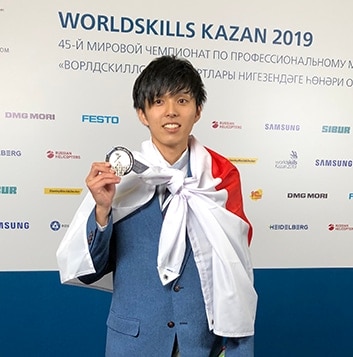